Unleash the Artist in You: Lost for Words by Natalie Russell

Why hello there!
Welcome back to Satisfaction for Insatiable Readers...the place that never learned how to say no to a book that captured my attention, which might explain the MOUNTAIN of books constantly cycling through my "to-be-read" list.  *ahem*  What can I say?  I LOVE BOOKS!

Today, we're diving into a Children's Picture Book that is perfect for readers of all ages.  It stars an animal cast that is ready to share their creative talents (and inspiration) with all of you...all except one little guy.  You see, he's having a bit of trouble uncovering his creative side.  One might even say that he's.... 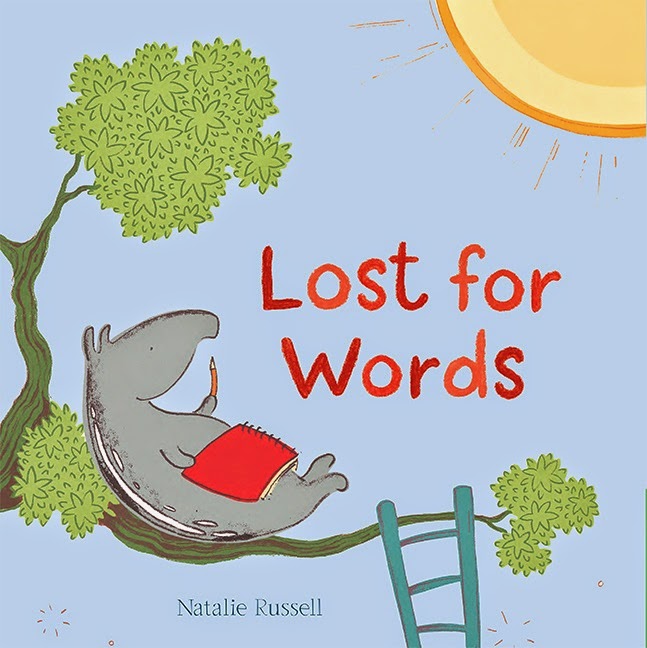 This is the story of a young tapir named Tapir (a fact which I found simple yet remarkably adorable) who is, simply put, at a loss for words.  You see, he and his animal friends all have these new nifty notebooks and pencils just waiting to be filled with what their overflowing imaginations produce.  Giraffe has his poems, rather crafty ones too!  Hippo has his stories, which when considering the extent of his travels outside the jungle as rather imaginative.  Flamingo has her songs, taking her to greater heights than her own wings.  Tapir has…well, Tapir has a little tantrum because he just can’t seem to find his own talent, his own creative niche.  In seeking a break from it all, he unknowingly welcomes a new viewpoint into his life…and that view will change his outlook on the world as well as empty status of his shiny new notebook.

I gotta say it, I’m a fan of story books and picture books in equal turn.  There’s just something about their (usually) simplistic natures combined with either bigger messages or grander-than-at-first-seen tales that captures my own imagination.  What can I say?  I’m a kid at heart if not in numerical age.  That being said, I do believe that while this book is aimed at the younger set, and they will certainly appreciate the adorable artwork and story in general, the older set can also partake of this adventure.  While Tapir is searching out his own talent, his friends talents are on display for both him AND readers.  That’s right.  We get a poem straight from the…giraffe’s mouth.  There’s a short story from none other than Hippo himself!  Even Flamingo gets her day in the sun (pun intended) with a lyrical share…and musical one too if you can read/play sheet music.  Though the kiddos will enjoy these inclusions as well, I think the message of everyone having a talent is a great share for one and all plus a welcome reminder for those of us that have had to perhaps shelf our own creative sides while in pursuit of making ends meet. In conclusion, a wonderful tale from F to T and even the G and H in-between (that’s Flamingo, Tapir, Giraffe and Hippo…just in case I lost you there ^_^).  It’s sure to bring a smile to both your face and your heart while also reminding you to take your own creative nature off the shelf every now and then because the exploration of such endeavors can bring about true beauty in its most natural form.  Recommended for all ages, shapes and sizes; this one is for the multifaceted soul in each of us.

Review copy received courtesy of ­­­Niki at Peachtree Publishers.  (THANKS!)  For more information on this title as well as their complete catalog, be sure to stop by their official site, friend them on Facebook, catch up on their blog, or follow along on Twitter.  This title was set for release Spring 2014 (aka NOW), so be on the lookout for it on a bookstore shelf near you.

This sounds like a delightful, I've fallen in love with Tapir.