Hi guys!
Welcome back to Satisfaction for Insatiable Readers…or should I say BLOG TOUR central because that’s pretty much what we've been this week but with good reason!  There’s just THAT many books to share and really…what reader isn't constantly on the look out for their next read?  A show of hands?  That’s what I thought.

Today, we are playing host to a blog tour courtesy of Lexie over at The Book Bug (Hi, Lexie!) for the second book in a trilogy that I started once upon a time.  Yes, those were the days of having a bit more time and a few less books on your hands and…okay, so I’m not really reminiscing, I thoroughly enjoy my busy bookish life (if only the work part would sort itself a might better…hello?  Anyone need an avid reader/reviewer with creative passion looking to break into the publishing side of things? *ahem*) but once in a while, life gets in the way…such was the case with this book.

I actually received it for a potential review some time ago from iUniverse.com and though my intentions to work it in some time were good, alas, it was not meant to be….until now.  As luck would have it, Lexie’s tour found its way to my email box and presto change-o the rest is history….or rather today’s post.  Ready to read all about it?  Hold your horses there mi amigo; if you haven’t checked out the first book, Heir to Power, you’re gonna wanna do that first.  Don’t have it in your hot little hands?  Too bad…but I've got you covered; just click HERE to check out my review of the first installment in this trilogy.  When you’re through, read on my friend….read on!

Today’s book of choice and blog tour guest is…. 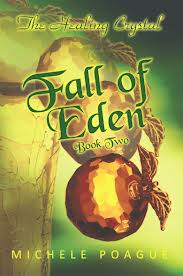 The Healing , Book 2:
Fall of
By
Michele Poague

Myths are but shadows of a greater truth.
What is the Healing Crystal and who is the rightful heir? Is it a religious object or a powerful weapon? Does it belong to a fallen line of kings or to the colonists of Survin? Should its fate be left in the hands of the young and inexperienced Kairma or to Narvin, the last descendant of a line of kings?
Kairma holds the and believes she will become the next leader of Survin, while her younger sister Kinter, believes she, not Kairma, is the rightful heir. Narvin believes the Healing Crystal is the Star of Genesis, a powerful relic his ancestors have been seeking for centuries.
Determined to possess the object that will return him to his glory, Narvin is unwavering in his quest to possess it, and Kairma is caught in a fierce race across barren deserts and rugged mountains to a shattering finish where the winner must decide the fate of the world.

Sounds exciting, right?  It IS…for the most part.  Allow me to explain.

When I embarked on my adventure with this developing trilogy once upon a time, I seem to remember it being more YA tinged and fantasy (sorta) than Science Fiction; the combination of the two is what made it an interest for me since I don’t usually gravitate towards the latter genre.  This time around, it’s showing its true Sci-Fi colors (when an appropriate cover color choice too! ^_^) and while it did confirm some of the things I was trying to sort out from book 1 (such as where the vault originated from and how as well as an explanation of why times are the way they are), it also began my quandary into would I or wouldn’t I continue the series.  By book’s hefty end (another chunk-ster at 439 pages), I can honestly say I was drawn back in enough to want, maybe even NEED to see this thing through.

The author has a way of combining cultures of old with flashes of what’s just on the horizon and times being what they are they explode in a most natural way.  Technology, advancement…all things that are foreign to the Survinee’s and yet they are a part of their past, nay their very roots.  (Yup….definitely a twist when THAT one is revealed.)  The only visible part of that mystery is the crystal passed from Miral to Miral (basically the leading lady of the healing family) and protected with their lives from the outside world.  Little did they know that the outside world was looking for the same said crystal just for much more devious reasons than healing powers.  The ironic part?  The tribe doesn't even know how to unlock the secrets of the stone (nor what they truly are) and yet they still have faith enough to believe it the right thing to do.  Much courage and strength abound within this tribe regardless of how many fall over the course of the story.

Whereas book 1 introduced us to the Survinees, their way of life, the White Ones, the future heir to the crystal and just what happens when outsiders are let in, book 2 shows us that a little bit of greed goes a long way…in destroying everything, and a little faith can move mountains.  Kairma, though fretting about her upcoming choice for Comad as any girl would (especially since he would be her mate as well as the male leader of the tribe), doesn't have a moment to spare for girly thoughts and desires as she is thrust into a position of power when invaders come seeking their fortunes based on the guidance of a liar.  There are hard decisions to make and she is more than able to make them if she’d only trust in herself.  Thank goodness for Kinter, her sister who…oh no, wait; she’s the one that gets them into trouble time and again despite how well she learned her lessons and the masterpieces in both medicine and meal she can create out of virtually nothing.  Tisk tisk Kinter…don’t you know why vanity is one of the deadly sins?

Perhaps we’ll have better luck looking for a “thank goodness” when our eyes are applied towards Naturi, the tribal hunk who’s been raised since birth to become the next Comad, therefore prematurely tying his heart to Kairma.  Think again folks.  He’s TOO focused and not in a good way either….he’s also a bit of a pushy fellow.  Hey, easy on the eyes only goes so far!  Let’s swing our gaze over to Collin, our Survinee rogue.  Yesiree, he’s not a bad visual choice either and how well he knows Kairma could definitely take him far, if only he’d pluck up his courage and realize he HAS a chance, a good one at that, if only he’d stand his ground…not to mention he’s much more balanced in my opinion juggling the values and traditions with the need to create some of their own.  Guess you know who I’m voting for….back to the story…

We already know their “” was invaded by no good scoundrels and while that does provide for some dangerous and exciting times, I still wasn’t sold.  To me this book acted like so many second books in a trilogy do….mostly as a connection, a bridge from point A to point B.  How so?  Well for the most part, aside from the personal dramas following them like bees to a hive, the basic mechanics of the story were this… 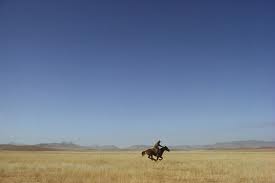 Watch out, they’re coming!  Run!
Ooh look….there they are…follow!
Egads!  They are still chasing us!
Ooh look…we’re gaining ground!
If we go this way, maybe we’ll gain some distance.
There they are boys!  Ride faster!
I don’t see them, but I know they are close.
We can’t lose them; keep riding!

…and so on.  It was A LOT of cat and mouse without the diversion of traps along the way.  Then when things have traveled so far from where we started, the sci-fi bomb dropped and we’re dealing with another kettle of fish entirely.  Again, it could be simply that since I’m not accustomed to this genre, that’s where the miss fit is occurring….and yet as I said before, with all that IS revealed by the final chapter, I have been bound to this trilogy and desire to see it through to its last.  Who’d have thought?  Moving forward….

My final thoughts; it’s a story about how life can change for the better even when we are at our, or mankind’s, whit’s end if only we have the courage to follow our hearts.  The journey may be long and arduous but most often everything that’s worth fighting for is. The imagined history of our people is all too real and perhaps a wake up call for a world at odds’ gotta love when books make you think beyond its borders.  Fit for Sci-Fi fans from teens through adults; there’s not much “questionable” content but there is an instance where you really want to OFF one of the outsiders due to his unsavory behavior…plus it’s a wee bit heavy for the kiddos. 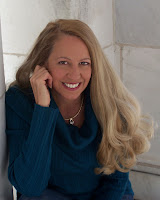 About the author…
Born Michele Rae Jeffryes in , , Michele Poague has spent most of her life in , and , and has lived in , since 1984. When she is not writing novels, researching a story, traveling, or working at her full time job as a nightclub manager, Michele volunteers her time as an advocate for the Libertarian Party.

Now, it’s time for YOU to get your just desserts!  What desserts are those?  Oh, I don’t know…the wording just SOUNDED good, but it is time for a CONTEST and what better way to capture your attention then with something sweet?!  Let’s make it doubly sweet once you see what the prizes are.  Check it out….

To enter to win these prizes, simply fill out the Rafflecopter form provided.
- Open from September 8 to October 8, 2012.
- Must be 13+ years of age to enter
- US mailing addresses only

Earn entries by doing any/all of the following:
- Leaving a blog post comment
- Liking The Healing Crystal Trilogy on Facebook
- Tweeting about the giveaway (once per day)
- Writing a review of Fall of Eden
(*remember guys, only post an HONEST review if you’ve read it!)
- Posting an interview, the book trailer, or a link to the tour.

Ready Freddy?  Alrighty then, clear the landing pad because here comes the Rafflecopter!

Review copy received courtesy of iUniverse.com; blog tour opportunity in conjunction with Lexie at The Book Bug.  (THANKS!)  For more information on either site, feel free to click the links throughout this post (promise, they’re safe!).  To continue on your journey through this blog tour, be sure to check out the official kick off post that includes the full listing of all the stops along the way and those still to come!

The part where Kinter is holding the man that tried to save her went straight to my emotions - tears and everything.

And I hated Kinter time and time again for being - well for being 14, I guess, and all the rash actions that brings. BUT when she explained the meaning of the pearls, I started to see her in a slightly different light.

Loving the idea that the author combines cultures of old with things just on the horizon.

Awesome review! Thanks so much for being part of the tour!