On the menu this week...the soon to be published sequel to an AWESOME-TASTIC Children's Fiction book that you HAVE to read.  No really...it's THAT good!  Here's a taste of my read in progress.... 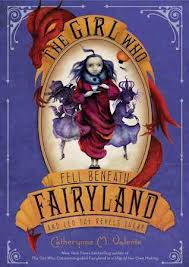 The Girl Who Fell Beneath Fairyland
and Led the Revels There
by
Catherynne M. Valente
(ARC)

The Duke held his hand to his mouth as though he meant to blow a kiss, and blow he did, but instead of kisses, indigo and holly colored tea leaves spun up from his palm, dancing through the air toward September's cup.  The Vicereine made an outraged noise and snapped her fingers  Out of her hand whirled flaming rose - and tangerine-colored coffee beans, which ground themselves to powder in midair and outraced the tea to hover over the little cup, scorching the blue leaves as it shot by them.
-- pg 73

September thought this a sad, rotten thing to say.  She remembered the awful sawing that cut her own shadow from her, and she might have dwelt on that terrible pain and what it cost her, had not the Revelers struck up their singing and laughing and talking and dancing once more.  They shouted and whooped even louder than before, dancing as if to erase the memory of the Alleyman and his great dark wheels.
-- pg118

Sorry for the number of teasers; I simply couldn't decide!
Think Alice in Wonderland combined with Peter Pan and....okay, so you're not even close as this is definitely an original, creative, imagination filled series but you'll at least have some semblance of the fun that your in store for.  This is a series great for kids of all ages and I do mean ALL ages because the word play and tongue twisters employed while fun will definitely give you a run for your money.  Guess it's never too early to start the little ones training for the SAT's!  ^_^  Release date scheduled for October 2, 2012....review to come!

I still have the first book in this series sitting around waiting to be read. Thanks for reminding me ! :)

I, too, am guilty of having the first book still waiting to be read. But I also received this ARC so I seriously need to get started on it. It's quite shameful of me, I know!

Thanks for stopping by Book Cover Justice!

Great teasers, I especially loved that third one.

Tiffany Drew: Oh my...another that needs to start the adventure. Don't worry...it'll be even better with BOTh titles available... ^_^

Love the second quote! Thanks for sharing it!

I cannot wait to start this series! It sounds right up my alley. I loved the teasers you shared- especially the one from page 144. Awesome! Glad you loved this book- it means I need to get STARTED!! :)
~Jess

Wow. How awesome is that last quote? Wow.

Oh now those are some excellent teasers. I like the imagery of the blowing of the leaves and flaming rose. Then to hear about her shadow being sawed from her. And that about a book! So true! Great teasers.