More than meets the eye....The Magician's Apprentice by Kate Banks

Hi guys!
Welcome back to the place that aims to have you thinking about at least 6 impossible things before breakfast every day….Satisfaction for Insatiable Readers.  (Sorry about that….’’ on the brain.  ^_^)

Quick reminder….time is ticking away on your chance to win Pushing the Limits by KatieMcGarry!  Don’t miss out….it’s a REALLY good read with a lot more depth than first meets the eye; plus it’ll get you ready for the NEXT novel planned by the author that explores one of the characters in this story a bit closer!  (As you can imagine, it’s on my wish list.)  Just click on over to the contest post, check out my review and get your entries in!  Now on to today’s post…

This is a book that I read last month (…not hard to say when this month just started, but nonetheless…) during a short interlude in my day.  I was looking for something to read to pass the time and BOOM…there is was.  It’s a short read but one that’ll get the wheels turning in the old thinking box you carry between your ears.  Don’t believe me?  Sally forth and see what conclusion you draw from my review.  Today’s book of choice is… 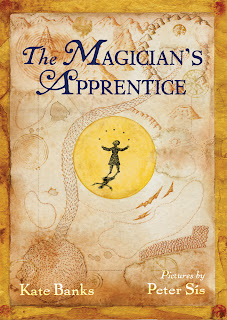 The Magician’sApprentice
By
Kate Banks
Pictures by
Peter Sis

Baz has always dreamed about following his two older brothers out of his dusty little town, so when a stranger comes to his family's home and asks him to be a weaver's apprentice, Baz is eager to start his journey. But when he reaches the and starts his apprenticeship, Baz learns that his master is very cruel. And when the master trades Baz to a magician for a sword, Baz expects no better from his new owner. But as Baz travels with this kind-hearted and wise magician, their journey takes him across the desert, up a mountain, and into the depths of life’s meaning. He learns to re-examine his beliefs about people, the world, and himself, discovering that the whole world is connected and no person can ever be owned.

I’m not sure what I was expecting actually, when I first embarked on this journey.  A story about a magician’s apprentice maybe?  Well, that goes without saying…but perhaps something light hearted filled with a little danger and a little circumstance…in other words, something other than what I ended up with which happened to be a surprising diamond hiding in the rough.

When first we meet Baz, he is a young lad anxious to be off on his own adventure.  His time will come soon…sooner than he even realizes…as the way of things in his corner of the world are not the same as for you or I.  His future is agreed to by the shaking of hands, exchanging of words, and promises sewn; whether truth resides in those promises however is a lesson learned the hard way.  One day, a stranger that seems to speak the language of the horses lands on their doorstep, bringing with him hope for a life better than those that came before him.  Riches?  Lands?  Treasures beyond your wildest dreams?  Nay.  Those are fantasies…Baz was born to a wood carver but with the hands of a weaver…or so says the stranger.  Plans are made, dates are set and within the next moon cycle he will embark on the next stage of his life’s journey…for better or worse.

For a time, it is worse actually, though I will spare you the details so you can perhaps explore them on your own.  Baz is given the role of a weaver, taught the trade so to speak but only just.  It is a frightening time and squalid place he lands in…something akin to a sweatshop though the lads all ended up their “willingly”.  The stranger from another land wasn’t all he made himself out to be, but fret not my friends because this is not all that is in the cards for young Baz; in fact, it is just the beginning.  A means to an end if you will that while teaching him the hard lessons life has to offer in one felt swoop, assist in turning him into the kind hearted man he will become…along with the guidance of Tadis.

Who is Tadis?  He is the second master to whom Baz is sold.  Yes…sold…or rather traded in this instance; it’s simply how things were done.  He is an old soul that believes everyone and everything has a purpose as well as a fate, if only we allow the universe to work its “magic” and trust in the ending for which we are heading.  He’s a really interesting character and the strengths he imparts to young Baz are life changing.  He helps he see past the hard times that had befallen him and treasure the pearls of wisdom gleaned from the experience.  He aids his heart in healing, thus providing him a way back home when all is said and done.  A magician he may be but truth was never seen clearer through his eyes. 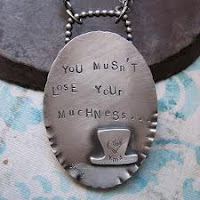 So what of our little friend, Baz?  He is after all the “star” of this show.  I’d be remiss if I didn’t spend at least a few sentences on this young fellow sharing with you the MUCHness that he contains.  What is MUCHness?  In this case, I am referring to how MUCH he matters, how MUCH he brings to each stage of his life, and how MUCH joy will be spread by the traveling of his MUCH loving heart.  Even when times are extremely tough and losing faith would be a matter of survival not something frowned upon, he still holds onto the smallest strands of hope.  No kidding…they are so small that a magnifying glass would be recommended to find them, the proverbial needle in a haystack if you will.  That courage in the face of EVERYTHING he’s experiencing is remarkable at any age, let alone in one so young and despite the darkness he has to find his way through…he does, and he’s better for it in the end.

So, do you agree with my first statement?  Did it get your wheels turning about life in general or perhaps it sparked something a bit more personal?  Any way you slice it this is an interesting read with many lessons to impart.  For me, I’m taking away the chance to believe that there is inherent goodness in all things even if it proves us wrong at times and that that belief that we bestowed upon it or them is another mark of kindness on our hearts that will see us through when times get rough.  What message will YOU take?

Recommended read for middle grade readers and beyond.  The content is dark at times so some may need a little guidance or reassurance but overall, it’s safe for all ages.  ARC for review courtesy of Ksenia at MacMillan Children’s Publishing Group.  (THANKS!)  For more information about this title as well as their complete catalog, feel free to visit them online, like them on Facebook, or follow along on Twitter.  This book was released from Frances Foster Books / Farrar Straus Giroux just last month and should be available now on a bookstore shelf near you.

Wow this book is so much more then the synopsis. I love the Much and think that is awesome. Well you kick-started the box between my ears with this one and I found myself oh so curious to read this! Awesome review!

Great review. Thanks for the dark tip.

This cover is adorable and after reading your description and review I know this will be a book I read soon. It did get my wheels turning and I am curious to know more! Thanks for sharing. :)
~Jess

This looks pretty fascinating! Is it YA or MG?

I've wanted to read this for some time. I didn't know that there was a version with illustrations by Peter Sis! I love his other illustrations! I'm going to have to seek out a copy to see how he adds his style to the story.

Loved the review and the warning! Fabulous! ;o)