Well hello there!
Welcome back to Satisfaction for Insatiable Readers…the place that welcomes the tall and the small, the happy and the not-so-much, the glam and the wistful because when it comes right down to it, READING IS FOR EVERYONE.

Today, we’re taking a look at a bit of an unusual title….in not only the actual title, but the cover art and story as well.  It came to my attention thanks to Adam over at Cricket Ink (THANKS!) and after I read the brief synopsis, I knew I had to check it out.  Why?  Well….take a look (or rather READ) for yourself….today’s book of choice is…. 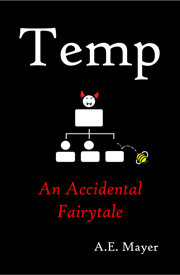 You might imagine the Collision that catapulted magical creatures to Earth would make every moment miraculous. But jobs were just as dull, and life could be just as boring. Traffic still stunk, only now with dragon Flyways above highways, the stink was worse than ever. Jackson Bee Belle Elders (Bee for short) is a promising Magical Sciences major who ends up smack in the middle of the Southern home town she tried to escape. Her lofty dreams of adventure only land her under fluorescent lights as she turfs creatures to temp jobs for Beveled Star Magical Staffing (B.S. for short). But everything changes when the cautious temp meets a friend who will dramatically alter her holiday weekend and her life. Nevermind that the friend is a wolf working for a despicable djinn who might use him to destroy the planet and everyone in it. Nevermind that the wolf can talk, but no human except Bee can hear him. Bee has a lot of secrets—some she knows about, and some she doesn’t. Fizzing with wit and adventure, Temp is a tale for anyone who has ever fantasized about a more magical life.

See?  What did I tell you….fun, right?  Filled with wit and worry of all shapes and sizes, for the most part I was entertained.  I mean who wouldn’t be when faced with the likes of unicorn loving Gilda (~shudders~….no I like unicorns but dear-me-oh-my the length this one goes to is SCARY…) or Bee’s outspoken Auntie who means well, but generally manages to suffer from foot-in-mouth syndrome rather often….not that she’d admit to that.  Aside from Bee herself, these two TOTALLY opposite “people” would have to be amongst my favorites in the book, plus it doesn’t hurt that they provide for a lot of entertainment whether intentional or not. 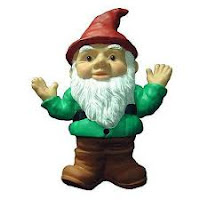 Let us not forget Angus now because…well, really….how could you?  *wink*  No really, he’s more than meets the eye in SO many ways, but at his core he has a good heart…something that another certain someone can DEFINITELY not claim (*grumbles*  ….greedy little, good for nothing, getting her in danger….)...don’t worry, by book’s end though their journey is not complete (as in “psst-author-type-person-can-we-have-another-go-at-it-soon” please?), true colors and forms (~whistles~) are revealed.  What?  You’re curious what I meant by that?  As you SHOULD be…but you’ll have to read the book to find out more.  (^_^)  Trust me, you'll want to because I haven't even mentioned Ninwicket or Saul or Crackers or....suffice it to say the cast is varied, large but only just and worth the introduction.  Moving forward…

No post would be complete without a little limelight reserved for Bee.  She’s smarter than she knows, full of fire and spunk, and manages to kick a little magical butt when the mood strikes.  Okay, some of that “butt” is not so little (really…we’re talking Moby Dick size), but she holds her own and by keeping her wits about her, shows them what’s for.  It’s nice to see the little human come out on top once in a while, you know?  Oh, well….not that that happens here or anything…umm, yeah….the ending has a bit of a close call; how close, won’t say but it will keep you reading until the wee hours if you happen to be reading past your bedtime.

All in all, I’d say it was an enjoyable read.  The blend of real life with fantasy was great and provided that option to connect with characters one might find themselves held apart from by more than simply a paper door (that looks like a typo, I know….put these paper doors are portholes!) or magic eye (a scanner of sorts).  The shift that caused everyone to be dumped from Tallwood into the same world was curious and yet believable at the same time…especially when reflecting on who did it and why. 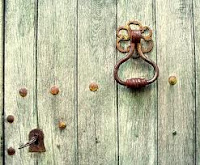 The opposing chapters of current events versus the journal entries shook things up a bit as well, giving readers insight to something about to transpire in the coming pages without giving it all away (and somehow for the life of me, I never connected whose journal it was til the end….DOH!).    Now, I will say the cover could possibly use a makeover (eye catching yes, but attention holding...maybe not as much as it could be) and there are a few dry spells where the journey overtook the adventure, but they don’t last long and you’re thoroughly rewarded for any troubles you may have experienced (though a nice waffle dog MIGHT have been nice…*ahem*).  So, what are you waiting for?  The doors to Tallwood won’t open on their own (well, anytime soon at least).  Take a chance on this adventure in the making because you never know when your next “on purpose” accidental choice will lead to your next favorite read.

Loving the cover of this book. Thanks for such an informative look at the book - I was debating whether or not it was my cup of tea or not and thanks to this post have decided it probably is.

Lovely review, I hadn't heard much about this one before today so thanks for introducing me to a new book! From what you said about it I think it's one I would probably love so I'm adding it to my wishlist!
-Kimberly @ Turning The Pages
+New GFC follower

Enjoyed your review! Don't think I've heard of this one, but have added it to my wishlist! Love the sound of Bee, so thanks for the heads up!

Oh does sound good, and the review was fun. :D Thank you! Sounds like one to look into. :)

MissKimberlyStardust: Fantastic! Hope you enjoy it as much as I did.

Alexia561: I think you'd like Bee...especially later on in the book once she has her footing.