Hi guys!
Welcome back to the Sunday edition of Satisfaction for Insatiable Readers…the place where just because it’s the LAST DAY of the month, doesn't mean we’re slacking off on the posts.  ^_^

Wow, can you believe it?  It is the LAST DAY of September.  Is it just me or did this year seem to blow by at times?  Anywho, not being one to let the days pass me by if I can help it, I bring to you today a curious bookish treat.  How’s it curious?  Well wouldn't you like to know!  Of course, BECAUSE you’d like to know is why I’m about to tell you…hehe…and that reason resides within the genre of the book, the delivery of the well known story, and the visual presentation.  All the mumbo jumbo boils down to the fact that it’s a Children’s Storybook take on a classic many know and some love, but the illustrations really make this one pop.  Ready to take a look inside?  Here we go.

Today’s book of choice is…. 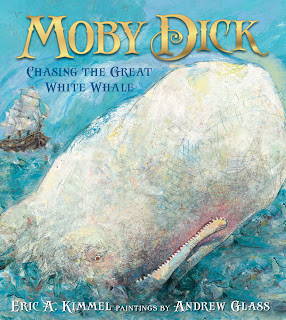 Told you it would be familiar!  Who hasn't heard of Moby Dick by Herman Melville?  Whether you've read it by choice, been forced into its pages by required reading lists and vindictive (just kidding!) teachers, or you've someone bypassed it in your bookish travels, you know the story…or at least the infamous opening line.

…so short and yet so recognizable, we are granted instant knowledge of what book is being referenced while being introduced to the main character if it’s your first time through.  Personally, I don’t believe I've ever read the original in its entirety (something I shall correct one day) but I have read bits in passing and certainly seen a silver screen take or two on the dramatic events covered.  For those not in the know, the book is about a young man and his adventure on the high seas aboard a ship named the Pequod, run by a man that could be pegged as the devil himself…or said to be chased by the devil himself because really his obsession turns PRETTY ugly and leads to some SERIOUSLY disastrous consequences.  So as not to spoil the story for those who've yet to explore it, I will refrain from revealing more…however there’s still MUCH to discuss on this one. 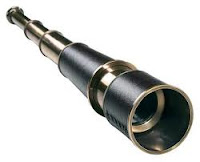 Obviously, this is not the original story (hence the author’s name being something other than Melville) but it has the charm of the tale it is wrought from with a twist that lightens the literary load both word and length wise.  I’m not afraid of BIG books but some younger readers are so what better way to make the gist of a hefty classic accessible than to put it in a storybook?  I can think of no other…especially since this one is creatively set to rhyme and meter.  That’s right!  A whale of a tale that puts men in small boats on the great big blue as a slightly demented captain seeks to right the wrong he was dealt so long ago.  The word pairings are clever and the overall story remains intact…a win win in my book!  Now the only thing that could make this any better would be pictures, glorious pictures of the men, the whale and the crew.  Oh look (glances at ARC)….

…they even thought of that!  But guess what?  These are not JUST pictures or illustrations though both are rather lovely, these are PAINTINGS…full fledged works of art that greet you wall to wall, err…cover to cover, page edge to page edge as you make your journey across the wild rough seas listening for that faithful call of “There she blows!”.  The images will have you turning through these pages at least another time or two even when you’re not in search of a story just to look at the art.  All the colors of the rainbow are present, each working with its neighbor to bring this story to life in a whole new way.  I’m amazed by the quality of each image as well as the time it must have taken to complete them!  Heck, it takes me long enough to draw a Pooh bear standing against the wind in a shower of fall leaves!  They are marvelous to behold and something that will make this classic into a more family friendly (aka all ages) read.

ARC for review courtesy of Ksenia at Feiwel and Friends, an imprint of Macmillan Children’s Publishing Group.  (THANKS!)  For more information this title as well as their complete and wondrous collection of books for the tall and the small, be sure to visit them online, like them on Facebook or follow along on Twitter.  This book released earlier this month and should be available now on a bookstore shelf near you.  One last note…to catch a glimpse at the artwork in a little more detail, be sure to check out the slide show now rolling over on the publisher’s website.

Until next time…go seek your own White Whale…and happy reading!

It has blown by (the year). Crazy fast.

I have never read Moby Dick, and never really wanted to. But I might be able to manage this :)

Never read Moby Dick, but think I could manage this version! And yes, the year has been blowing by pretty fast. Did we even have Spring? How can it be Fall already?

Forced into reading it by vindictive teachers ..... and I'm not kidding. I would have loved to have read this instead.