So, we've just about closed the door on one giveaway celebration (the SHOWERS OF BOOKS GIVEAWAY HOP via @bookhounds!) and we're stepping right into another.  Hey, you can't blame me considering the week long celebration that's about to commence and when you see the prize pack I have for you, YOU'RE GONNA FLIP (pages that is)!  Should I presume you are ready to get this show on the road?  WHOA there...don't shake the screen so violently....I'm getting a headache!  (^-^)  Ladies and gents, may I present, the next BIG EVENT, and week long bookish celebration... 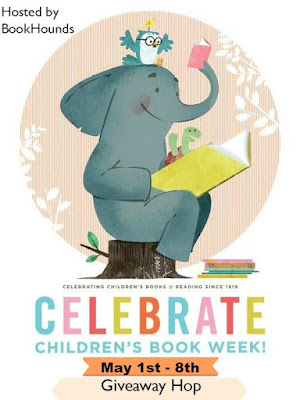 That's right!
It's officially Children's Book Week (May 2-8) and while I celebrate kid lit every day with absolutely no shame (if you can't enjoy a great children's read, you've misplaced your imagination), it's fun to refocus the spotlight to bring it to the forefront for the reading world.  The week long celebration is all about the books that brought us to the world of reading, let our imaginations roam, and are just plain FUN!  For more info on the event or events in your area, check out the OFFICIAL SITE.  Now, as for OUR celebration...

We've teamed up with over 50+ blogs once again via BookHounds (You rock!) to give YOU a chance to win some truly fantastic titles.  At the end of this post, you'll find a linky list to the other awesome sites that you should definite pay a visit to, but first, MY GIVEAWAY.  Once upon a time (*ahem* last week or so), I received an email from Rachel over at Penguin Young Readers (Hi, Rachel! ~waves~).  In it, I found an inquiry about a review copy I received, the offer of a forthcoming one...and an AWESOMELY AMAZING CHANCE TO BRING YOU INTO THE FANDOM FOLD OF AUTHOR URSULA VERNON'S WORLD.

Recognize the name?
You most certainly should!
She is the creative mind behind such works as Castle Hangnail (on my to read list), the Danny Dragonbreath series (have read a few, trying to collect them all!), and her latest creation, the Hamster Princess series (so much fun!).  Of the latter, I've read the first two (reviews to come this week!), and I'm anxiously awaiting the release of the THIRD book this October, Ratpunzel!  If you can't tell from the title, they are a sort of "fractured fairytale" with a graphic novel quality but PLENTY of pages of wordy fun to revel in.  In short, they are AWESOME and something readers of all ages can totally get into...same goes for Dragonbreath.  While one may appear to be geared towards boys and the other towards girls, they have something for EVERYONE in each and TONS of snarky (kid friendly) humor to boot!  Now, later this week, we'll be catching up with the author (~jumps for joy~), but for now, YOUR CHANCE TO WIN AN AMAZING PRIZE PACK will have to suffice.  ^-^

Danny Dragonbreath...
Book 1:  Dragonbreath
Book 2:  Attack of the Ninja Frogs
Book 3:  Curse of the Were-weiner
Book 4:  Lair of the Bat Monster
Book 5:  No Such Thing as Ghosts

Now, time for YOU to ENTER TO WIN and then get to hoppin' to the other fabulous sites of bookish fun participating in this event.

The rules...
*MUST fill out the Rafflecopter form
*OPEN to US residents only, no P.O. Boxes please
*WINNER will be contacted at contest end and have 48 hours to submit their full name and mailing information to be sent to the publisher for prize send out.  If the information is not received in the given time frame, a new winner will be chosen.
*SFIR is not responsible for lost prizes.

Special thanks to BookHounds for hosting this hop.  (THANKS!)  For more information on these titles, the author, the publisher, or our host, feel free to click through the links provided above.  Remember to stop in all week for more Children's Book Week fun!
Now, get to hoppin'!