Hi guys!
Welcome back to the site that doesn't know the meaning of the word "no" when it comes to potentially great book, despite time constraints....Satisfaction for Insatiable Readers.

Yep.  That's me alright.  If a book sounds good enough or catches my fancy, I can hardly say no and today's featured title is a prime example.  It comes to us on tour with TLC Book Tours and stars an author many have grown to love over her writing career.  She's known for her way with words and creating a literary family you feel like an active member of (enough so that you'd reach for the cannoli that was just placed on the table...I mean their table)...but speaking from my prior experience, I could neither confirm nor deny the claims....until now.  Yes, my friends.  I have now joined the throng of fans this author garners and will be seeking out the other titles starring this character and her family but first, allow me to introduce TODAY'S guest and book of choice... 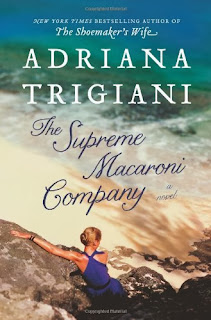 
For over a hundred years, the Angelini Shoe Company in Greenwich Village has relied on the leather produced by Vechiarelli & Son in Tuscany. This historic business partnership provides the twist of fate for Valentine Roncalli, the school teacher turned shoemaker, to fall in love with Gianluca Vechiarelli, a tanner with a complex past . . . and a secret.
A piece of surprising news is revealed at The Feast of the Seven Fishes when Valentine and Gianluca join her extended family on a fateful Christmas Eve. Now faced with life altering choices, Valentine remembers the wise words that inspired her in the early days of her beloved Angelini Shoe Company: “A person who can build a pair of shoes can do just about anything.” The proud, passionate Valentine is going to fight for everything she wants and savor all she deserves—the bitter and the sweetness of life itself.


This is a story of love found in the most unexpected places, the worlds we build to accommodate it, and the tragedies that can befall anyone, anytime, anywhere...no matter how completely we live.  Yet...amidst it all, there is hope.  There is love.  There is that which makes the journey ever so worth it and memorable long after it initial beauty has passed.

Step into the lives of the Roncalli family.  Meet the "crazy" aunts and uncles, cousins and parents, ex's and current loves.  Grab a seat at the Feast of the Seven Fishes and join in the maddening throng of voices that may sound like squabbling and in fact DOES contain some, but it means family and home.  I actually found myself and my family in some of their antics...after all, we're Italian-American too.  ^_^  Grant it, we don't have the large family...many of them passed away long before I was ever born...but the basics are still the same.  The memories are there and shared.  The food created with love and passed as lovingly as a newborn babe.  Valentine's friends, family and in-laws were a hoot and she deserved every happiness that came her way, even when she fought them. 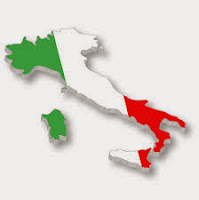 I can honestly say that I wasn't so certain about her union with Gianluca Vechiarelli.  Though he sounded like a decent man and the age issue wasn't an issue with them, some of his ideals clashed with hers much as they would have my own....darn American independent streak.  (^_^)  There was a time or two I wanted to smack him about the head for what he said or intended, but there were also those times when he was right on the money, even if neither Valentine nor I wanted to admit it.  Such is the result of great character writing.  You become invested in the story and the well being of your characters.  They are happy...so are you.  They are sad...so are you.  They are in the depths of despair, unwilling or unable to crawl out on their own...well, okay...perhaps you're not there but you genuinely want to see them through.

In conclusion, a story that's not so much about the remarkable fictional creative wonders an author can create but more the moments that life offers us and the ingrained magic found in each...if we only look close enough.  Truth be told, this was my first venture into this author's work, but it won't b my last.  Recommended for fans of Fiction...Women's or General, you're in for a good read.  Oh, and a quick P.S.....the mystery of the title choice IS explained during the story.  Trust me, it'll make you smile.

ARC for review courtesy of Trish at TLC Book Tours.  (THANKS!)  For more information on this tour as

well as those forthcoming, be sure to stop by their official site, like them on Facebook, or catch up on Twitter.  To read more about author Adriana Trigiani as well as her complete body of works, stop by her site, follow her on Twitter, or friend her on Facebook.  This title is set to release November 26th, 2013 via Harper, so be on the lookout for it on a bookstore shelf near you.  Think of it as an early holiday present....for you AND yours.

As characters are just as important to me as a good plot - maybes even n more so - this sounds like a promising read. AND I'm intrigued by the title.

Being from an Italian family I can't believe I haven't read any of her books yet!

Tracy: Right? I was curious about it too....up til the BIG reveal; well sorta big. It's not the whole story for sure, but it's definitely a fitting one.

heathertlc: Me too! I know the covers have always caught my eye, but I just never picked one up. Good news? Now I've more reading to look forward to! Squee!