All in good time: HONEYSUCKLE DREAMS by Denise Hunter

Today, we're joining TLC Book Tours for a stop along their current tour for a the latest release from author Denise Hunter.  It's the second title in her Blue Ridge Romance series and while it fits into the Christian Fiction genre as intended, there's no need to shy away.  I get it; your gut instinct is to think it'll be preachy, and while yes, it does allude to a higher power being in charge and the act of having faith, never does it feel like you're in Sunday school...except when they are actually talking to a pastor, but I mean, HELLO!  He's a pastor!  Anywho, I'm getting ahead of myself.  Let's back up a second and do the introductions properly for today's book of choice is on deck... 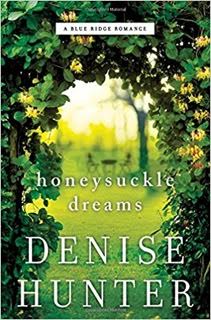 About the book...
Brady Collins is juggling full-time fatherhood with the booming auto repair business he runs out of his barn. His ex-wife's sudden death has shaken him, but the devastating news that follows leaves him reeling: Sam is not his biological son.

When Sam's wealthy maternal grandparents decide they want custody of the child, Brady knows he's in for the fight of his life. Brady's attorney tips him off that one major life change would virtually assure him of winning guardianship of baby Sam at the final hearing: the stability of an impending marriage. And his friend Hope is willing to step in as the loving and devoted fiancée.

Local radio celebrity Hope Daniels has been driven by a solitary goal her entire life, and she's finally been offered her dream job—in Atlanta. Unfortunately, her arrangement with Brady requires her presence in Copper Creek, and she is faced with missing the chance of a lifetime or standing in the way of a dear friend’s dreams.

Both Hope and Brady would give their lives for beautiful Sam. But can they give their trust to one another? With this new novel in the Blue Ridge Romance series, Honeysuckle Dreams shines light on the complicated and beautiful angles of love.

First things first, let's talk about that cover!
The moment I saw it, I was sucked into its simplicity and beauty.  I mean obviously that's honeysuckle pictured there, but why so much...it appears to be an archway, with what intent....what about the blurred image of a table and chairs in the background?  Isn't it funny how so many questions can arise from such a simple scene...and yet they did, and I had no desire to ignore my curiosity.  Now, about that story...

Brady was a gentleman through and through, and a stand up father to boot, even when things started coming down around him.  Hope was an independent woman with a heart of gold dealing with her own demons from a tragic past that she just can't seem to let go of.  Sam was an adorably sweet baby caught in the middle of it all, but making the best of the unfortunate situation with his cheerful demeanor and easy laugh.  Could they forge a life together in less than the usual circumstances?

I love how the couple felt REAL, despite the seemingly out there scenario they were placing themselves in.  I mean, would YOU want to work through a marriage backwards?  Start off as married and aim to become a couple in all senses of the word?  Yeah, sounds daunting, and yet these two have a longstanding friendship to build upon...whether or not its enough to sustain them when times get rough is another story altogether, but the foundation is laid nonetheless.  Despite the heartache it caused, I appreciated the hard times Brady and Hope had to go through....from the custody battle to unexpected blasts from the past to opportunities too good to pass up to lingering fears best brought to light...it made you love them and root for them to make it through THAT much more.  My heart ached when Sam's future hung in the balance.  I was beside myself when Hope was withdrawing from everyone and everything and yet as helpless as she seemed to do a thing about it.  Good thing they had friends, family, and faith to fall back on (even if their relationship with each wasn't always surefooted) because truly it was the combination of them all that helped them reach towards a future they promised one another...and then some.

All in all, a sweet story with its own share of heartache and strife.  I loved this book much more than I thought I was going to and that's saying something because my hopes were pretty high.  Though my first time reading the author's work, I can't say it'll be my last.  Recommended read for Christian Fiction fans as well as Contemporary Romance fans who like their stories sweet with playful banter.

Denise Hunter is the internationally published bestselling author of more than twenty-five books, including A December Bride and The Convenient Groom, which have been adapted into original Hallmark Channel movies. She has won The Holt Medallion Award, The Reader’s Choice Award, The Carol Award, The Foreword Book of the Year Award, and is a RITA finalist. When Denise isn’t orchestrating love lives on the written page, she enjoys traveling with her family, drinking green tea, and playing drums. Denise makes her home in Indiana where she and her husband are rapidly approaching an empty nest.

Special thanks to Lisa at TLC Book Tours for the chance to bring this tour to you and to the Thomas Nelson team for the ARC for review.  (THANKS!)  For more information on this title, the author, the publisher, THIS TOUR, or those on the horizon, feel free to click through the links provided above.  Don't miss the rest of the tour (and the Instagram portion!) as it makes its way through the blogosphere for more bookish fun!

Until next time, remember...if it looks good, READ IT!
Posted by Gina at 3:19 AM