What's YOUR metal?: BOOK BIRTHDAY WISHES TO... Jed and the Junkyard series by Steven Bohls!

Well, I don't know about you, but I've been on a roll recently with some really AMAZING reads.  Whether it's the story, the writing, the characters, or perhaps something I might not have previously tried that turned out curiously awesome, there have been quite a few.  Today's featured title falls squarely in that last category...curiously amazing but might not have tried had it not arrived on my doorstep (well, in my P.O. Box).  It's the second release in the "Jed" duology and yeah, that means I'm about to blow your mind with not ONE, but TWO titles.  Are you ready?  Yeah, you might THINK you are, but trust me, you're not really ready for this...and THAT'S the beauty of it all!  Readers prepare for the BEST junk storm you've ever seen as we laser in on today's books of choice... 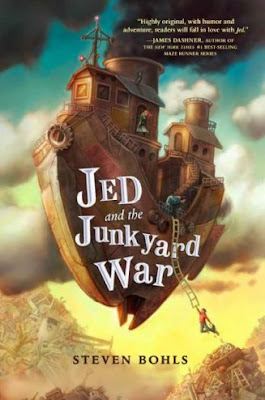 The first book has us learning all the itchy scritchiness that exists with the mouses, and dreads, as we meet and greet our boy, Jed.  His life up until now has been anything but normal, and yet it's about to go a few steps, nay...a few LEAGUES beyond that when his twelfth birthday goes a bit, shall we say... awry?  Well I mean, what else would YOU call it when EVERY day of your life (except birthdays!), your parents drop you off randomly somewhere with a few random things and expect you home in time for dinner (or sooner!) by your own means...odd, right?  Even more odd that THIS BIRTHDAY was apparently fair game for the same...or was it?

Seriously, I did not know what I was getting into, but once I started reading, I just couldn't stop. Why?  Well if you asked me at the time, I'd be completely unable to explain it other than saying it was odd, and curious, but interesting, and I had to see exactly where it was all leading.  Having finished it, I couldn't really clear things up any better...it was still odd, curious, and interesting, but also so filled with imagination, fantasy, and wonderfully weird world building that you couldn't help but get sucked into it all.  Then when the going got tough, the newly toughened (but not really because he was really reeling from a scritchtastic revelation!) Jed got going leading us to today's BOOK BIRTHDAY celebrant and book two... 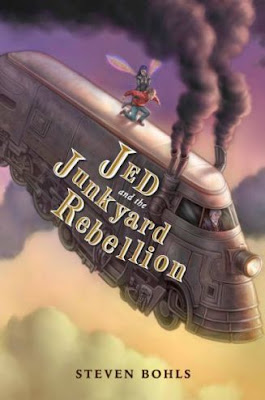 About the book....
With a turn of a key, Jed discovers he’s more (and less) than he could have ever imagined. But as more questions than answers surface, Jed digs deeper into his history-and goes further into himself. Who is his father? Where is his mother? What is this place? How did these dreadnaughts get here? And . . . why is this happening to him? Strange truths, unexpected twists, and powerful revelations unfold as Jed confronts his past and contemplates his future.

Now Jed has seen the light, or should be say the golden glow, and is more confused than ever.  Never mind the fact that his mind is not exactly his own right now.  Never mind his memories aren't truly there, and his family still hasn't truly been found, and now dear old dad (but not that one!) is seeking him like a bloodhound after a criminal, and the danger levels are increasing exponentially with every new dread ship's arrival.  Oh yes, there will be loss, junk storms aplenty, and danger up the wazoo, but there will also be discoveries about what truly makes family family, and how sometimes the only way to move forward is to truly let go of it all (or you know destroy a bunch of things in a major way, but you know...same same here).

Once again, I started reading and simply couldn't stop. The world built here takes hold of your imagination and doesn't let go.  Long after you finish the final page, you'll still be remembering the battles with the dreadnoughts, the desperate searches and last chances, the mysterious disappearances and unusual characters, and all the other "junk" you may have been tempted to ignore, but won't be able to forget.  It's EXCITING, it's STRANGE, it's a thousand other descriptive words you don't normally reach for when describing a FANTASTIC READ, and yet they SO work right here.  So, what am I saying?  Get yourself to your favorite book retailer and snag your copy today before the new King Mouse is crowned and you miss out on all the fun!

Special thanks to the Disney Hyperion team for the copies for review.  (THANKS!)  For more information on these titles, the author, or the publisher, feel free to click through the links provided above.

Until next time, remember...if it looks good READ IT!

What sound like two amazing reads with great covers to boot, you really are on a roll.