Hi guys!
Welcome back to the site that aims to bring it all and then some...well bookish front at least...Satisfaction for Insatiable Readers.  Yesterday, we played host to the up and coming blog tour group Partners In Crime and author Laurel ﻿Dewey as we took a look at the grit behind her Jane Perry novels.  Today, we take an entirely different route with a whole new guest...and add a little more contest fun.  Sound good?
I thought it might.

Without further adieu, may I introduce author Jeremy Robinson aka Jeremy Bishop!
Take it away sir!

“Hurray for free Kindles!” you say, but who the hell is Jeremy Robinson? Allow me to introduce myself. I’m the author of eleven mixed genre novels, published in ten languages, including the popular fantasy YA series, THE LAST HUNTER, and the fast-paced Jack Sigler series (also known as Chess Team—not nearly as nerdy as it sounds), PULSE, INSTINCT and THRESHOLD from Thomas Dunne Books/St. Martin’s Press. I’m the co-author of an expanding series of novellas deemed the Chesspocalypse, which take place in the Chess Team universe. If that doesn’t wet your whistle, I’m also known as Jeremy Bishop, the #1 Amazon.com horror author of THE SENTINEL and the controversial novel, TORMENT. For more about me, or my books, visit http://www.jeremyrobinsononline.com/.
I have watched for years as my fellow authors held online events called blog tours. Some would visit ten blogs. Others, as many as ninety. And every day they would bring something different, waxing eloquent about a multitude of topics. When I finally decided to have a blog tour of my own, and settled on doing each and every weekday in October, my first thought was, “This will be cool,” which was immediately followed up by, “Holy crap, I can’t think of something interesting to say twenty times in one month!” I can barely think of something worthwhile for my own blog just once a month. The solution is what follows; each blog participating in the tour could ask me ANY three questions. That means, if the subject matter bores you, I’m not to blame! Huzzah!
But fear not. There are other rewards for sloughing through the questions and answers. I’ll be giving away two Kindles to two randomly selected readers who sign up for my newsletter. Details on the giveaway can be found below. On to the Q&A!


1)  What inspired you to become an author?

I began my career as an artist. I drew just about every waking moment of my life up until age 22, when I was illustrating comics. Drawing comics led to writing comics and I had an epiphany—my drawings were stories. I wasn’t creating fine art. I was telling stories. And as it turns out, that’s what I really love to do, whether that be through words, images or movies. Telling a good story and entertaining people is what I’m all about.

2)  Why zombies as opposed to other paranormal creatures or everyday life?
Honestly, I have no idea. From a marketing perspective, they’re hot right now, and have been for a few years. But I don’t follow the trends. I write what’s on my mind and for some reason, zombies have always appealed to me. That said, my zombies are very different than traditional zombies. If I don’t come up with something new, I like to twist something that’s already popular, in this case zombies. In TORMENT, they’re definitely undead, but some readers have said I can’t call them zombies because they don’t eat brains. In THE SENTINEL, the zombies are actually Draugar, which is the Viking legend that both modern zombies and vampires are based on. So while my books might be labeled “zombie” don’t come expecting more of the same.

3)  Maybe it's the time of year, or maybe it's the fact that you write horror novels, so the question begs to be asked....what scares YOU the most and why?

What scares me is actually the basis of TORMENT. The book asks the question “Are you ready to die?” and explores the possible ramifications of not being ready. Death is less frightening if you believe in God, and Heaven, and are sure that’s where you’re headed. But death, without knowing which way I’m headed, or if I’m simply going to cease to exist…those possibilities terrify me. And I think that fear resonates with many people who read the book because a lot of readers get really angry upon finishing it. And they’re not leaving bad reviews, they’re leaving angry reviews. Which, from my perspective, is a very cool thing. It means the book invoked an emotional response. Made them think. Made them truly afraid.

Hope that was as good for you as it was for me. Now how about that kindle giveaway? 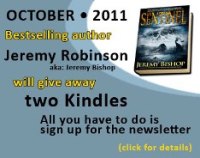 Here’s the deal...
...to be entered to win one of two free kindles all you have to do is visit my website—http://www.jeremyrobinsononline.com/ — and sign up for the newsletter. That’s it. The first kindle will go to a randomly chosen newsletter signup on October 31. For the second kindle, there’s a catch. The second giveaway will only be triggered if one of my kindle books hits the Amazon.com bestseller list (top 100). So pick up some books (most are just $2.99 a pop) and spread the word! If one of the books squeaks up to #100 for just a single hour, the second kindle will be given away to another randomly chosen newsletter sign up on October 31.

** I will announce winners via Twitter, Facebook, my blog, and newsletter (which you will be signed up for!) but I’ll also e-mail the winners directly—I’ll need to know where to ship those kindles!

Thanks for spending some time with me today.
Hope you enjoyed the Q&A, and good luck with the kindle giveaway! 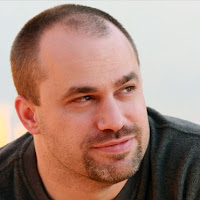 -- Jeremy Robinson
~~~~~~~~~~~~~~~~~~~~~~~~~~~~~~~~~~~~~~~~~~~~~
Thank you Mr. Robinson...err, Mr. Bishop...for that entertaining post and for humoring my brief inquiries on your writing.  Best of luck on all your future endeavors!  Special thanks as well to Stan at Find the Axis for the opportunity to participate in this fabulous tour.  Be sure to check out all the other stops along the tour because really...three questions....ANY three questions?  That can be a dangerous...and fun....reveal each and every time.
So...you heard the man!
Get to it!
The means of entry is simple and the bookish rewards waiting for you are unending.
Until next time...good luck everyone...and happy reading!

Thanks to Jeremy for a great author interview. I'd love to know why zombies are so popular of late, is it we are just tired of vampires? AND also are zombies more popular amongst males than females? After all vampires have a certain amount of sex appeal whilst werewolves, well, werewolves are just over-grown dogs (always popular with the girlies?) but zombies are just kind of gross.

Petty Witter: Good question! I've yet to understand the draw to this particular paranormal critter, but then again I've only read one story featuring them. Hmm...haven't written them off for good, but I think I need a bigger pool of comparison. ^_^ If I had to guess, I'd probably say more males than females...the gross factor plays into that part A LOT.

Hey all. Thanks for for having me!

As for zombies, the best explanation that I've heard is that post-9/11 zombies became mega-popular because, like terrorists, zombies they kill without remorse, for no apparent reason, and their hatred can spread. The collective unconscious of U.S. pop culture processed those fears by telling stories about surviving the evil, nameless, killing hordes. And we don't feel guilty when the survivors hack, shoot and bludgeon their way to safety, because zombies are already dead. It's catharsis.

Keep in mind that I didn't come up with this. It's just the most well thought out explanation for zombie popularity that I've heard.

Jeremy Robinson: Hmm...certainly sounds believable. Thanks for that insight!