How are you this fine fair morning?
Good I hope. Fall is DEFINITELY in the air, even down here…well at least til the sun reaches its full power and blasts the cool breezes out to sea…and that puts me in the mood for a few autumnal things; colored leaves and crisp mornings, caramel apples and…spooky reads. How bout you? Are feeling the “must-read-something-spookilicious” bug about now? If not, perhaps you will after today’s post because it is anything but typical.

Today we welcome another blog tour to the site…what’s that? Why ANOTHER one? Well, let’s just say I have trouble turning down those titles that I have an interest in and when they happen to be on a tour that will help spread news of it’s release to the masses…all the better! This one fits perfectly into the fall spiel of things in more ways than one and some of those ways are DEFINITELY not apparent from the outside. Shall we jump right into things like a big, freshly raked pile of leaves? (hehe) I say, let’s! Today’s book of choice is…. 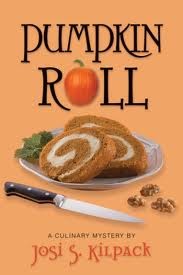 From Pump Up Your Book…


Sadie Hoffmiller is looking forward to spending her favorite baking season of the year making delicious New England recipes in Boston, Massachusetts, with her favorite leading man, Pete Cunningham, as they babysit his three young grandsons. But when the boys insist that Mrs. Wapple, the woman who lives across the street, is a witch, Sadie and Pete are anxious to distract the boys from such Halloween-induced ideas. However, it gets harder and harder to explain the strange things that keep happening, particularly after Sadie learns the eccentric Mrs. Wapple has been attacked in her home. As the unexplained occurrences escalate, Sadie finds herself embroiled in yet another mystery with life-or-death consequences. Can Sadie discover whoever—or whatever—is behind the mystery before anyone else gets hurt? Or will this be Sadie's last case?


Alrighty, so we’re all set up for a good bit of mystery, intrigue, and a dash of paranormal, right? Ha! Wrong! What we’re REALLY all set up for is a mysterious story that changes course time and again from events that are perhaps blown out of proportion with an explainable cause to those things that can only truly be described as done by the unseen hands of something paranormal. *cue spooky music* ^^ghosts…I don’t see my flying ghosts!^^ Did I mention the hunger pangs as well? No? Oh, well please…be warned. Do not go into this book with an empty stomach or at least without a well stocked kitchen because it being a “Culinary Mystery”, there are several great food options mentioned along the way (hello, did you SEE the cover?) AND the recipes are INCLUDED in the book. Yep, I’ll definitely be trying out the pumpkin roll and perhaps the beans at the very least. Anywho, away from the food and back to the story…

Sadie Hoffman…err, I mean Hoffmiller (inside joke…read the book, you’ll see), is not your average Jane Gumshoe. She’s an investigator, yes. She’ll follow the course of the case from beginning to end with the help of her son and her growing list of contacts, yes. She’s not a 20-something buxom blonde out to show her assets to the world in order to get the information she needs, nor is she a hardcore knuckle-cracking gal who could freeze a polar bear with her icy stare. Why the strange analogies? Well, it seems that sometimes…not always….female P.I. types get one stereo type or the other tacked on to their characters and grant it, it’s done successfully, but a new perspective is always refreshing…hence, Sadie.

She’s a lady of years with cooking skills to boot and a penchant for being in the right place at the right (or wrong, depending on your perspective) time. Mysteries seem to follow this one around and they are not without excitement. Life and death even hang in the balance a time or two and the fact that her policeman beau can’t even get things straightened out (and the fact he’s hiding something) just adds to both their frustration and the mystery. Shawn, Sadie’s son and assistant on cases, is resourceful considering his distance from everything and Jane, her partner in crime reporter acquaintance from her last case, is anything but subtle. Mrs. Wapple plays her part flawlessly albeit at times calling to mind a particular cake confection often shared at Christmas time.

This is book six in this deliciously titled series with book seven just on the horizon (Banana Split, 2012) and while I haven’t read any of the preceding novels, I was still able to grasp the story fully without feeling like an outsider looking in. Her past cases are mentioned now and again but to only a degree of comparison or remembrance, not actual detailed recognition. Would I be interested in checking out the rest of the series? Sure…though I will not shy away from a truth I must share.

The beginning of the book….for me, dragged in a major way. I mean after I gather who she was, who he (Peter) was, who the kids were and where they were, I was ready for a bit of action, but it was slow in coming. There were tidbits here and there to pick up along the way to help ease the journey and then about a third of the way in …BOOM. The magical seeds grew into a bean stock leading straight on to a giant of a mystery to be solved…and the novels trickier nature is revealed. Just as you think things are going to go one way, the author switches back to surprise you with an outcome you weren’t prepared for…in a good way….often inducing gasps, laughs and small chuckles at how easily you were led.

In summary, though slow to catch fire, a worthy mystery nonetheless and the timing for it couldn’t be better. You get to visit the Northern side of the US of A at a beautiful time of year and share in the sites and sounds that surround…all while trying to solve a mystery unfolding right before your eyes. Try as you might, you won’t be able to guess the ending….I (pretty much) guarantee it. The twists and turns it takes will make you retrace your steps a time or two in search of lost clues, but rest assured things come together in the end, leaving one with a particular jones for a Banana Split. (Oh look…there’s a sample after book’s end…. *grabs literary spoon*)

Special thanks to Tracee at Pump Up Your Book for the review copy and chance to participate in the tour. (THANKS!) For more information about this tour (continues through October 28th) as well as those upcoming, feel free to visit them online. For more information about the author (and her fabulous contest going on right now), be sure to check out her site and/or blog. Last but not least, the publisher (Shadow Mountain) can be found in cyberspace as well, just click here to connect with them and see what other bookish treasures are waiting to be found.

A “Culinary Mystery”, now I look the sound of this.

"Slow to catch fire" is a great way to describe how felt about the last one I tried in this series. Great review.

This is the first I've heard of this series. Very curious now, they sound fun and I'll have to check them out.