MONSTER NINJAS: Fancy yourself IN books? Now's your chance!


Hi guys!
Welcome back to the Friday edition of Satisfaction for Insatiable Readers….where you never know what adventure we’ll embark on next, but you can be sure it’ll be bookish.

Today’s post sees the work of author Ryan Jacobson taking a new turn. You may recognize his name from a past post or two here on the site….remember the Can You Survive literary series? Yep, that’s him! Same amazing talent now applied to an all new venture….an online comic series. Sound somewhat average? Ah, but you haven’t heard what it’s about. Two words…MONSTER NINJAS. Pretty cool, right? Even cooler when you see them in action. Drack, Cleo, Frankie, and Wolf band together to fight the forces of evil led by Leeland Vance. Don’t be fooled by the mundane name for the baddie, despite his association with the government’s Monster Division, he’s up to no good.

Perhaps one of the coolest parts of this series aside from the awesome illustrations is the frequency of which new panels are released. It’s old fashioned in that sense, building up the anticipation as you wait for the latest installment every Monday…but you’re not left empty handed other days of the week. Each Friday, there’s a new freebie on the site….this week happens to be an all too cool original drawing available for download. 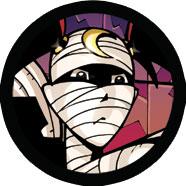 Then you have the blog posts detailing the comics journey from random thought to published online reality….the latest “how it all began” features Cleo the Mummy, a she who was almost a he. It’s a great look at how the wheels turn in the mind of an author and how just because things start out one way, doesn’t mean they won’t be tweaked a thousand times before they see the light of day. Encouraging to those of you that hit a writers block moment and end up needing to back track a bit, don’t you think?

Anywho, the point of this post is to clue you in the to the awesome that is MONSTER NINJAS. If you like the classic monsters of old but fancy a new twist, or ninjas just happen to be your fave, you NEED to check out this fantastic combination of both worlds. Now, I have a question to pose to each of you….

Have you ever imagined seeing yourself IN books?

I don’t simply mean identifying with the characters or the situations experienced, I mean LITERALLY seeing yourself pictured in a book.

Well now, thanks to author Ryan Jacobson and artist Shane Nitzsche, one lucky reader can! That’s right. One lucky reader will have the chance to have themselves drawn into this online comic as none other than….a ZOMBIE. Betcha didn’t see that one coming. ^_^

Here’s how to enter….

FIRST
...stop by the official website and read through MONSTER NINJAS; trust me, you’ll be glad you did.

SECOND
…spread the word so that you can share this FUN-tastic web comic with your fellow readers and give them the chance to win too!  It's your choice HOW you share this great site, just be sure not to keep it all to yourself!  ^_^

THIRD
…leave a comment with your favorite character from the comic and why they are your top pick! Be sure to leave your email address so if YOU are the lucky winner, we can get in contact with you to be zombified.

Entries accepted NOW through July 27th, 2012 so the artist has enough time to create the next masterpiece starring you! Open to one and all, near and far, young and young at heart. 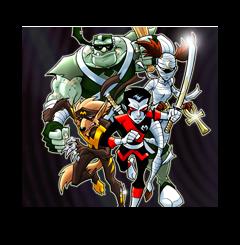 So, what are you waiting for?
Check out all the fun…spread the world…leave your comment and you’re in it to win.

Wow, how good would that be. I remember how excited our nieces and nephew were when we invested in one of those books in which their names etc were incorporated in the story but this is something else.

Love, love, love that cover of "The Call of the Wild!"

Ooh Ooh love this! LOVE! Frankie is my fav lol. I love that he doesn't get sarcasm. Wolf comes in a close second though! *jumps out all actiony*