Hi guys!
Welcome back to Satisfaction for Insatiable Readers...the place where good books come to celebrate with all their bookish friends.  (Moi included!)

Today, we're playing host to a Meryl L Moss Media blog tour featuring a newish release you may want to add to your 2014 reading list.  Did I?  Honestly, no...but that doesn't mean it won't be YOUR cup of tea.  Oh, and once you're done reading the "what" of the post, be sure to stick around for the party favors.  They're pretty kickin'.

Ladies and gents, readers of varying ages, let's shine the spotlight on today's book of choice.... 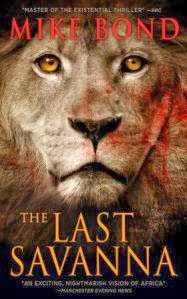 THE LAST SAVANNA
By Mike Bond

At the age of 19 author and former foreign correspondent Mike Bond took off on foot across the Sahara, experiencing the euphoria and terror of wandering across the blazing, uncharted desert mountains from Tamanrasset to Timbuktu. Since then he has travelled and explored many thousands of miles through Africa’s jungles, deserts and savannas, and has participated in
military operations with Kenyan rangers against elephant poachers. These experiences have ignited a life-long fascination and involvement with the African continent, which comes blazingly to life in his existential thriller THE LAST SAVANNA (Mandevilla Press; January 15, 2014).

Former SAS officer Ian MacAdam is wearing his retirement like an ill-fitting suit. Uncomfortable at home on his Kenyan ranch watching his wife slip into alcoholism, he accepts an assignment by an old government friend to hunt the one creature that is truly worth hunting—man.

Leading a team of commandos against ivory poachers, he is horrified to learn that these criminals have kidnapped the young archaeologist who still has an unexpected grip on his heart. Soon he is on a desperate trek to rescue Rebecca—and perhaps, himself.

THE LAST SAVANNA is an unflinching look at the beauty and violence of Africa, the horror of the slaughter of the great beasts, the delicate balance of tribal life, the growth of terrorism and the timeless landscape. Its insights into how elephant poaching and drug sales are used to fund Islamic terrorist activities by Al Qaeda offshoots like Al-Shabaab are shockingly relevant and little known. And, as Bond points out, “at the heart of the book is the truth that preserving East African wildlife is the best way to fight fundamentalism. The animals are not only essential to the environment; they fuel tourism, which in turn fuels the economy.”

MIKE BOND has been called the “master of the existential thriller” by the BBC and “one of the 21st century’s most exciting authors” by the Washington Times. He is a bestselling novelist, environmental activist, international energy expert, war and human rights correspondent and award-winning poet who has lived and worked in many remote, dangerous parts of the world. His critically acclaimed novels depict the innate hunger of the human heart for what is good, the intense joys of love, the terror and fury of battle, the sinister vagaries of international politics and multinational corporations, and the beauty of the vanishing natural world.

Thanks to the fab folks at Meryl L Moss Media, YOU get a chance to win an AWESOME Wilderness Survival Backpack chock full of goodies to get you through most any outdoorsy situation. 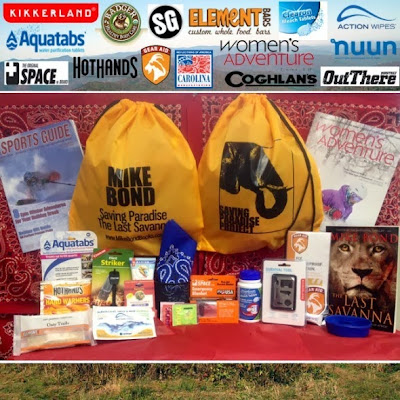 Ready to enter?
All you've got to do is submit your information below and BAM; you're in it to win it.
Entries accepted TODAY through midnight CST, January 17th, 2014.
US only; no P.O. Boxes please.

Special thanks to Alissa at Meryl L Moss Media for the chance to participate in this tour.  (THANKS!)  For more information on this promotion as well as those forthcoming, be sure to stop by their official site, like them on Facebook or follow along on Twitter.

What a striking cover and such an amazing giveaway.

A happy 2014 to you and yours Gina and happy reading.