Lend Me Your Ears: It's a DOUBLE Audiobook Review!

So, today marks a first as I am sharing my thoughts on a recent AUDIOBOOK I finished...make that, two.  Shocked?  I know I was and while I won't be converting to the format anytime soon (sorry, the narrator in my head RULES!), I DID in fact enjoy the stories themselves, and appreciate the additional venue for "reading" to take place.  I mean, it's not safe to read and drive, right?  (JK!)  Anywho, back to the stories at hand...first up, a ghost of a tale... 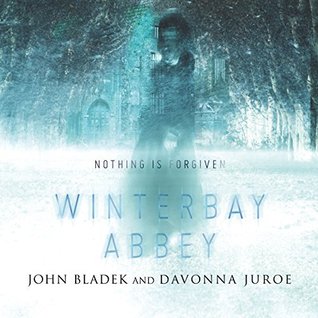 About the book...
Will Larson has one last chance to save his stagnant career as an architect: design a grand restoration for a long-abandoned abbey. Looming above the breathtaking, windswept coast of Maine, Winterbay Abbey offers a picturesque spot for a charming hotel. But the locals harbor a peculiar distaste for the ruined Gothic convent.

After witnessing a drowning within sight of the abbey, Will wonders why the police seem disinterested in the case. He begins looking deeper into the incident, gradually uncovering chilling secrets behind the old nunnery’s walls. Will’s wife, Emily, becomes convinced the drowning is a ghostly replay of a past tragedy. But their investigation into the abbey’s frightening history soon becomes a desperate struggle to escape Winterbay’s dark curse.

So, I actually listened to this one on Audible.com thanks to a win with the author (sweet!).  We started off on a high note, getting to know our lead characters, and diving head first into the history of Winterbay from the locals.  Let's just say that "colorful" doesn't do it justice.  From a convent to a home for wayward girls to the severely creepy shell that remains today, aside from the location having a great (and dangerous!) view...it's beyond me why anyone would want to set foot there.  Certainly not Will Larson, especially after everything he learns AND experiences.

We are shown echoes of the past as Will explores the Abbey for all its worth.  He's trying his best to secure a good life for both himself and his growing family, but while he's plagued by his own missteps, these new intrusions are seriously making him question his sanity.  Strange additions to his drawings, mysterious blankets with a rather familiar signature, figures on the beach calling out for...help?  Revenge?  Justice?  Just WHY was he the one reached out to?  Was there no other soul to connect with that would understand the strangeness of what was going on...the lingering hurt from generations of bad deeds done in the name of good?  There was much to puzzle and several leaps of imagination to take as the story twists and turns, binding you to its bones like so much cement in a foundation.  I will admit that the seagulls outside my work totally had me flashing back to the Abbey and not in the most pleasant of ways after having finished a fairly precarious scene before having to pause things and head into work.  *-*

In the end, though certainly not in a format I favor, the story itself was definitely a winner! If you're a fan of gothic horror or simply love a good spooky story, this one's for you.  The characters are memorable for so many reasons and the perilous nature of everything as it currently stands will keep you on the edge of your seat.  Try to guess along the way just how things will turn out...and even if you're a stickler for details thinking you might rival the great Holmes himself, I bet you don't see everything coming.

Now, our second venture into audio land takes us back to another place, another time, and a totally different type of story.  I've actually reviewed the book here on my site, but when the audio version came out, the author asked if I'd like a listen.  Considering the type of story, I was game and I wasn't disappointed either... 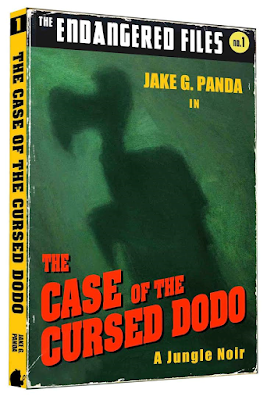 The Case of the Cursed Dodo
The Endangered Files
by
Jake G. Panda

About the book...
Listen up! This is not your garden variety audiobook. Recorded in Jungle Stereo, this audio adventure follows Jake G. Panda, famed wildlife investigator, on a globe trotting mystery that is a throwback to old time radio serials. When trouble calls, Jake is always there to answer the phone.

This hilarious audio installment of THE ENDANGERED FILES is a wild and woolly tale involving a missing guest, a green bird, and a bunch of double-crossing critters. It's designed to introduce young readers to the subject of endangered species in a fun and informative way. 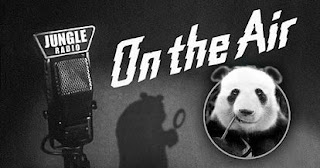 As I'm not one to rehash the details, you can read about my adventure through the pages HERE...as for the thrill ride my ears took while listening to this one, I gotta say, it was a win!  Again, SO NOT AN AUDIOBOOK PERSON...but this story, the style it's written in, the genre it claims, the fact that it's more fiction than reality (don't tell the panda!) lends itself a certain permission, if you will, to play with the voices, and be as dramatic as possible.  Even when I was reading, I found myself reading aloud, doing alterations to my own voice for the various characters, and affecting a Bogart-esque way of speaking when in Jake's shows...err, paw prints....so the liberties the author took in utilizing those same variances to bring it to life audibly, worked wonders.  I can easily see audiobook fans digging into this one as well as it being a rather stimulating story time "read" for a group or classroom setting.

Special thanks to author Davonna Juroe and Jake G. Panda for the audio versions to peruse.  (THANKS!)  For more information on either title, or the authors, feel free to click through the links provided above.

Until next time, remember...if it looks (or sounds!) good, READ IT!