Today, we're joining The Children's Book Review for a stop along their current tour featuring none other than...Moose'r McDan!  What's that?  You don't know Moose'r McDan?  Well then, you're in for a treat because as everybody knows (well, at least now they know), he's the friendliest moose in the land!  Ready, set, let's read all about today's blog tour guest and book of choice... 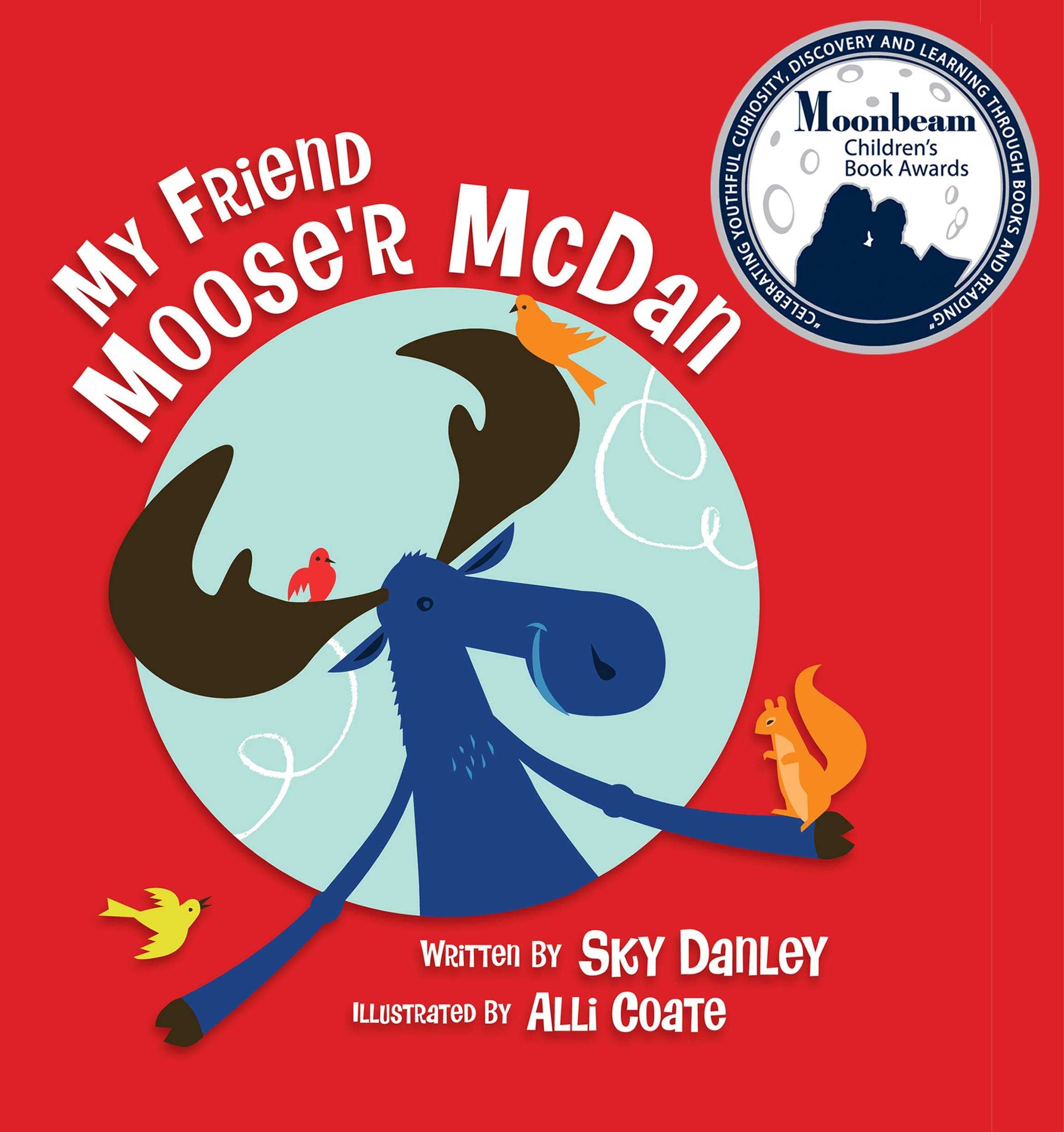 About the book...
An aggressive hunter bear meets a gentle moose who is looking for a new friend. The moose is so friendly that the bear decides to drop his gun and stop hunting altogether. Instead, the bear learns that it’s more fun to just hang out with a new friend, playing games and enjoying nature. However, after the fall colors change, it’s time for the bear to go back home. The gentle moose is sad because he lost his play friend, so he is again looking for a new one. He invites whoever is reading the book to become his new friend.

It's a simple book filled with lovely illustrations and a message fit for young and old...make peace not war....or in this case specifically, make FRIENDS not trophies.  Moose'r McDan is quite the character and I love him for it. He's kind to EVERYONE; the birds, the bees, the chattering chipmunks, and even a bear that is decidedly less than playful.  He just knows that with his charming rhymes and positivity, he can overhaul any situation, any heart to a better way of being.  When all the fun and games have been had and their ways must part, the author took the story one step further into our reality by extending a personal invitation, if you will, to any wee ones reading that want to be friends too!

It's a great way to remind little ones that violence is not the answer, and friendship can yield bounty much more than we could ever dream.  Combined with the joyful images, I can see this one becoming a fast favorite for the younger set, while still holding a place in the hearts of adult readers.

SKY DANLEY was born in the quintessential midwestern town of Peoria, Illinois — a town so ordinary that Hollywood producers famously ask, “but how will it play in Peoria?”

During his childhood, Sky’s father worked as a computer programmer at the company that built NASA‘s Onboard Apollo Guidance Computer, a technological marvel that enabled man‘s dream to land on the moon.

Watching this engineering feat as a child motivated Sky to a lifelong passion for the dreams of aviation and the ideals of innovation. Sky even attempted, with his childhood friends at the time, to build a rocket-propelled flying bicycle.

Following this passion, Sky attended Purdue University, earning a Bachelor of Science in Aeronautical and Astronautical Engineering, majoring in aerodynamics and minoring in rocket propulsion.

After completing a GE-NASA contract for the computer modeling of airflow, Sky entered and served as a commissioned officer in the United States Air Force, earning his wings as a USAF Pilot.

Sky later flew as a Captain for the legendary Trans World Airlines (TWA), an airline once owned by the famed aviation innovator Howard Hughes, whose Hollywood connections forever christened TWA, “The Airline of the Stars.”

Also drawn to the Stars, Sky now dreamed of modeling innovative visual stories for the film industry, and with that goal, he enrolled at Harvard University, earning a Master’s Degree in Film and Studio Arts, concentrating on visual story and writing his thesis at The Walt Disney Studios in Burbank, where he cataloged and documented the unique story creation processes of Walt’s original 1930s story department, which emphasized the visual over the dialogue.

A copy of My Friend Moose’r McDan
A plush moose

Open to legal residents of the 50 United States and the District of Columbia, who are thirteen years of age or older in their state or territory of residence at the time of entry. Void where prohibited by law.

Special thanks to Bianca at The Children's Book Review for the chance to bring this tour to you as well as the copy for review. (THANKS) For more information on this title, the author, the publisher, this tour, or those on the horizon, feel free to click through the links provided above. This title is available now, so see thee out a copy at your favorite online retailer so it can cast a spell on you!


Until next time, remember...if it looks good, READ IT!﻿