BLOG TOUR: The Thing Is by Kathleen Gerard - Review + CONTEST!

Today, we're welcoming back the gang from Tribute Books Blog Tours (Hi, Nicole!) as we play host to a stop on their latest promotion.  It stars a Women's Fiction/Romantic Comedy title that will touch your heart in more ways than expected while reminding you that love in its many forms is the most powerful thing in this world.  Ready Freddy...and everyone NOT named Freddy?  *smirk*  Here comes our latest book of choice and blog tour guest... 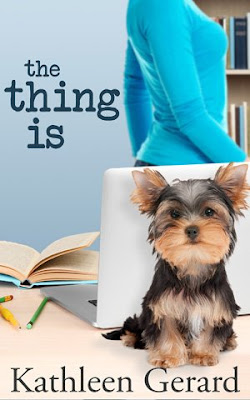 About the book...
Can a woman mired deep in the throes of grief have her heart and soul rallied by a therapy dog named Prozac who possesses supernatural wisdom and a canine Mensa IQ?

Meredith Mancuso is depressed. Ever since the death of her fiancé, she has shrunk from the world. Even with her successful writing career, she's not motivated to work. When her sister, Monica, begs for a favor, Meredith wants nothing more than to say no. But she’s ultimately roped into pet-sitting an orphaned Yorkshire terrier named Prozac.

Blessed with spiritual wisdom and a high IQ, Prozac is an active pet therapy dog. To heal broken-hearted Meredith, he rallies his fan club at Evergreen Gardens, an independent living facility, where he visits each week.

Prozac and the community of resilient older folks challenged by losses of their own propel Meredith, often against her will, back into the land of the living. Meredith learns that most people carry some sort of burden, but it's still possible to find meaning, purpose, and joy—and even love—along the way.

This is the story of one four-legged friend's desire to see his name in lights.  Okay, not really...but that IS on his bucket list IF he accomplishes the latest assignment given to him by the Canine Dispatch Board.  What?  You've never heard of them?  They are in charge of all the Spirit Guide Dog arrangements, from well-being to training, best matched placements to opportunities to grow, and they take their jobs seriously, as our dear friend Prozac is about to find out.

Prozac...I know, I know.  How in the WORLD does a dog end up with a name like that?!  Let's just say the lady in charge of this litter was married to a pharmacist and call it a closed case, okay?  Anywho, he entered this world with his eyes on the prize imagining time spent with his elderly charge was going to be a cakewalk, and while initially true that whole "to be determined" part of the case file he initially read should have been questioned a little harder.  The TBD in this case is one Meredith Mancuso who comes into Prozac's life so unwillingly it hurts...as in my sides hurt from LAUGHING.  Only dog owners can attest to the truthfulness the author embedded in Meredith and Prozac's first days.  The unexpected swirly, the race through the house stark naked trying to catch a sopping wet pup, the unfortunate step into a warm present left behind, and oh so many more.  Seriously, Meredith may not have been laughing, but I was on her behalf.  *ahem*  Anyway...

Push comes to shove and Meredith seems stuck with her four legged companion for the time being. It's okay, she's a big girl...she can handle it...right?  Right...umm, did I fail to mention the dog as an UBER active social life that's going to impinge on her daily attempt at writing schedule and force her to associate with strangers on a daily basis JUST because the darn dog is so cute and friendly?  Yeah, I knew I forgot something.  Will this thrust into social land crack her well insulated shell wide open or will all the ill-gotten attention force her to burrow deeper within herself?  If Prozac lives up to his name and demeanor, she won't have much of a choice in the end...

The alternating chapters within the book allow readers to get to know both Meredith AND Prozac that much better.  We can see just why Meredith is the way she is, stunted in life, closed off from others, and perfectly content to live that way.  She has a violent heartache inflicted upon her that did some massive scarring, but the truth of the matter is...SHE'S STILL HERE.  She's still alive...she's just forgotten how to live.  Enter our little canine companion, Prozac, who seems to only be missing a little red cape.  Okay, that's not entirely true because in HIS chapters, we get inside his mind to discover just how he REALLY feels about all those visits, how much puppy intuition he actually possesses, and just what it takes to capture his puppy attention.  They play off each other well and despite some missteps, you couldn't ask for a better match.  Now, these two are far from the only characters (term used literally AND in quotes) worth a mention, but you'll have to get to know Razzle-Dazzle-Radcliffe (aka David...and does anyone else notice how the name is akin to a particular boy wizard...and the magic connection?), Judge Thea (oh, that woman!  So coniving!), and the rest of the Evergreen Gardens gang on your own time.  Trust me, it's worth the personal introduction.

To conclude, a book I enjoyed from cover to cover with characters that were easy to lose yourself in and a fur baby with heart and snark to spare.  It'd make a great addition to your summer reading list to wile away an afternoon in the sun, or tucked into your favorite reading nook with a fur baby by your side.  I will "warn" readers that tissues may be needed at some point in the work, but believe me when I say that it's all sorted out in the end.  Open your hearts to this lovable pup and take in the lessons he and his human charges have to offer.  Recommended read for Women's Fiction, and Romantic Comedy fans...the romance is VERY light but the heartfelt passion of the emotions burns bright. Kathleen Gerard writes across genres. Her work has been awarded many literary prizes and has been published in magazines, journals, widely anthologized and broadcast on National Public Radio (NPR). Kathleen writes and reviews books for Shelf Awareness. Kathleen's woman-in-jeopardy novel, IN TRANSIT, won "Best Romantic Fiction" at the New York Book Festival.

Special thanks to Nicole for the invite to this tour as well as the copy for review.  (THANKS!)  For more information on this title, THIS TOUR, the author, the publisher, or those promotions on the horizon, feel free to click through the links provided above.  This title is available now via Red Adept Publishing, so be on the lookout for it on a bookstore shelf or virtual retailer of your choosing.

BEFORE YOU GO...
DON'T FORGET TO ENTER THE TOUR WIDE CONTEST FOR YOUR CHANCE TO WIN A $25 AMAZON GC OR PAYPAL CASH!  JUST CLICK HERE!

Gina, I knew you'd love this book :) Thanks for the stellar review!

Thanks so much for this great review, Gina! I am so pleased to know you enjoyed the book! :)