Today, we're playing host to a TLC Book Tour starring an unusual work of Fiction whose title delivers a truth that's meant well, but hard hitting like a punch to the gut...or face. *ahem*  Curious?  I thought you might be, and that is also what my initial reaction to the book was at both the start AND finish.  Without further ado, I give you today's book of choice... 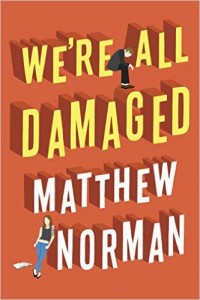 About the book...
Andy Carter was happy. He had a solid job. He ran 5Ks for charity. He was living a nice, safe Midwestern existence. And then his wife left him for a handsome paramedic down the street.
We’re All Damaged begins after Andy has lost his job, ruined his best friend’s wedding, and moved to New York City, where he lives in a tiny apartment with an angry cat named Jeter that isn’t technically his. But before long he needs to go back to Omaha to say good-bye to his dying grandfather.
Back home, Andy is confronted with his past, which includes his ex, his ex’s new boyfriend, his right-wing talk-radio-host mother, his parents’ crumbling marriage, and his still-angry best friend.
As if these old problems weren’t enough, Andy encounters an entirely new complication: Daisy. She has fifteen tattoos, no job, and her own difficult past. But she claims she is the only person who can help Andy be happy again, if only she weren’t hiding a huge secret that will mess things up even more. Andy Carter needs a second chance at life, and Daisy—and the person Daisy pushes Andy to become—may be his last chance to set things right.

Unusual. Unique. Unsettling.
A lot of "U" words there, but all terms that I rattled from my brain while reading and upon finishing this title.

Andy is a man that's hit rock bottom, or rather had it hit HIM...right in the face....twice.  The "love of his life" (a phrase in quotes because honestly, I don't think they were perfectly matched) having ditched him for the LITERAL guy next door decides to end it all over Sizzling Chili Lime Chicken at Applebee's with the uber upbeat 'Wake Me Up Before You Go-Go' playing in the background.  Talk about a scene set, well played, and certainly memorable.  I gotta agree with Andy though, future generations that uncover that song will indeed wonder what we were on at the time...ha!  Anywho, needless to say "the ex" (aka Karen, aka she-who-should-not-be-named) didn't win any points for her let down of our lead man, but then again...he doesn't really win too many points himself at first...until there was Daisy.

I'm sorry, I know Andy is our lead and his coming home for his dying grandfather (so sad), dealing with the new family order, and attempting to evade the Glitter Mafia (it's a thing apparently...curious) are what this book was truly about, but Daisy played a huge part in it all and really stole the show.  Her quirkiness, her individuality, her honesty and straightforward nature (well, sorta), were so off when considering the other characters here, but worked so perfectly well together.  How she brought Andy out of his shell while still remaining partially in her own.  How she managed to hold up several charades at once without batting an eye, and once they all fell down, she was no worse for wear.  She was a girl of many colors with literary tattoos to boot (loved that detail!), and a heart broken by love the same as anyone else.  The times she and Andy shared weren't romantically charged per se, and yet their hearts were definitely on their sleeves...cotton or ink wise.

In conclusion, to say it's not a cheery book is an understatement...it certainly floats right above death's door and hanging in there, but it's as real as fiction can be with the bruises to prove it.  I don't know many that wouldn't have enjoyed putting "Don Johnson" in his place (not the actor...in case you were wondering) even if it did mean waking up to the face of someone you'd rather not existed (nope, not spoiling that one).  I also can't imagine there'd be a huge line up for having your life image made over in a 90's movie sorta way with some added humiliation, and yet here, it works.  The characters are three dimensional, the feelings feel-able, and the struggles real...as well as the realization that we ARE all in fact damaged, but it's what we do with the remains that really counts.

Recommended read for adult readers due to language, and some limited content. 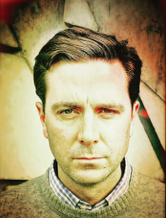 Matthew Norman lives in Baltimore with his wife and their two daughters. His writing has appeared on Salon, the Good Men Project, and the Weeklings. His first novel, Domestic Violets, was nominated for a Goodreads Choice Award in Best Humor.

Special thanks to Lisa at TLC Book Tours for the chance to bring this promotion to you as well as the ARC for review.  (THANKS!)  For more information on this title, the author, the publisher, or those tours forthcoming, feel free to click through the links provided above. This title just celebrated its BOOK BIRTHDAY the beginning of this month via Little A, an imprint of Amazon Publishing, so be on the lookout for it on a bookstore shelf or virtual retailer of your choosing.

Interesting that you write 'to say it's not a cheery book is an understatement' as that was my first thoughts on having read the book blurb.

Undecided as whether this sounds like a refreshing change to all those'Happy Ever After' novels or just plain depressing, I'm tempted to give it a read for myself.