Today, I'm honored to be a part of a very special blog tour from Walden Pond Press starring a recent release in the Children's Fiction arena.  It'll inspire, motivate, teach, and by book's end, move you to tears...and that's only HALF the story.  Ready or not fair readers, please join me in welcoming today's blog tour guest and book of choice... 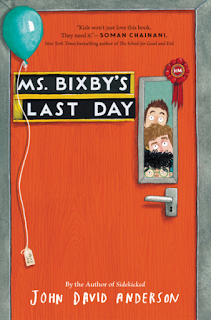 About the book...
Everyone knows there are different kinds of teachers. The good ones. The not-so-good ones. The boring ones, the mean ones, the ones who try too hard. The ones you’ll never remember, and the ones you want to forget. But Ms. Bixby is none of these. She’s the sort of teacher who makes you feel like the indignity of school is worthwhile. Who makes the idea of growing up less terrifying. Who you never want to disappoint. What Ms. Bixby is, is one of a kind.

Topher, Brand, and Steve know this better than anyone. And so when Ms. Bixby unexpectedly announces that she is very sick and won’t be able to finish the school year, they come up with a plan. Through the three very different stories they tell, we begin to understand just what Ms. Bixby means to Topher, Brand, and Steve—and what they are willing to go to such great lengths to tell her.

John David Anderson, the acclaimed author of Sidekicked, returns with a story of three kids, a very special teacher, and one day that none of them will ever forget.

John David Anderson is the author of many books for young readers, including Sidekicked and The Dungeoneers. A dedicated root beer connoisseur and chocolate fiend, he lives with his wife, two kids, and perpetually whiny cat in Indianapolis, Indiana.

This is a book that celebrates educators and their students to the second power.  While the title can be taken many ways, the actual meaning within the story is more powerful than you can at first imagine.

You go in thinking, okay, a teacher is saying goodbye to her students, no big deal, right?  WRONG!  It's not just the start of summer.  It's not simply the "bird class" you're trying to get through to get a better GPA.  It's your FAVORITE teacher, the one that made you realize you DO have something special to offer even if it seemed like a crazy out there idea, and she's facing something that no one should have to go through...the big "C".  Though this news comes as a shock to both the students and readers, the way in which Ms. Bixby handles it deserves a gold star.  She doesn't want to worry her students, but she also doesn't keep them in the dark.  When the timing is right, she shares her news, as well as her unexpected early start to summer vacation, and allows plans for a "au revoir" party to commence.  The problem is cancer doesn't work on your schedule.  It takes no prisoners and changes everything you once thought secure.  Their party plans were tabled...unless three resourceful students, three boys that were paying attention in class even when it seemed they may not have been, get creative to the upteenth power. The results of their initial brainstorm lead to a VERY adventure filled day of firsts, but the final act before the curtain drops is what it all boiled down to and trust me...you'll be moved to tears.

The story is told through the eyes of the three lads, Topher, Steve, and Brand, who each call Ms. Bixby their own in some special way.  For Steve, it was in elevating an Honorable Mention to noteworthy status (not that is wasn't, but having him realize it was something else entirely)...and the E.T. moment between them with the "Be. Good." was the cement in my affection for her.  For Topher, it was the realization that perhaps his dreams aren't so far fetched and the sharing of a certain red folder that no one would have known existed.  For Brand, it wasn't so much the teaching in the classroom, but the open heart.  His life had several obstacles the others didn't and her ability to share a bit of her strength with him did more than any straight A report card could.  Ms. Bixby was inspiring in all the right ways, yet human.  I concede to the boys description of her as "one of the Good Ones"...and hopefully everyone has had someone like that in their lives at some point or another.  Speaking of which...

Outside of the reviews, this tour has an extra special element to it that makes it THAT much more personal.  We were invited to share a memory of that one special educator that touched our own lives in some way that we'll never forget.  I admit, when I started thinking about it, I had SEVERAL come to mind and in relation to the story shared here, there were a few connections I could draw to my own history.

There was Mr. Boss (MY sixth grade) who had a true passion for teaching and it was on display in every subject he covered.  I must also note that he was easily led OFF topic and loved regaling us with stories either from his own life or history, so I was totally reminded of him while reading.  Then there were my seventh grade Language Arts teachers, most notably Mr. Ahearant and Ms. Daffin.  Let me tell you, their styles were totally different, and I may have got along more famously with one (though others didn't) than the other (which pretty much NO ONE did...sorry, ), but their tough love, formidable instruction, and desire to see us succeed were  woven into every assignment, each pop quiz, and all the "read-your-work-in-front-of-the-class-despite-the-fact-you-are-painfully-shy" moments you can muster.  Ultimately, these two shapers of young minds are what infused in me a love of the English language, proper grammar (though social media allows us to create our own), an eye for typos (and my cringe reaction when finding them in HUGELY publicized pics and posts), and an extra oompf in my bookish nature.  One I will say that really stuck with me though, as much  if not more so than the ones I'm mentioned thus far, would have to be my eighth grade teacher who never could quite remember that my LAST name was my last name, not my first (*smirk*), Sister Laurenta.

That's right.  I went to a Catholic school and we had a few nuns in residence.  Two were teachers, and one was the school principal.  Though all of them poured their hearts into guiding our young minds, I have to say Sister Laurenta left the biggest impression.  In the classroom, she was a formidable educator, always making sure that we captured what she was trying to convey, but she did so in such a fun and interactive way, there was rarely a question as to the class picking up on it so long as they were paying attention...I know I sure was.  We did science experiments testing chemical reactions and creating food as a result such as caramel and ricotta cheese (which I actually ended up exploding my beaker all over the desks...*ahem*).  We dissected preserved cow hearts, and held fish eyes in our hands to examine the texture.  If ever there was a way to work a field trip or party into our studies, she was there with bells on...first on the sign up sheet, and last to suggest the fun was done.

When studying colonial times, she insisted we take a trip to an authentic village over state lines.  During the holidays, a potluck wasn't simply enough...she baked cookies at the convent and invited the girls over to help her, and of course insisted a selection of movies be shown during the feast.  I still laugh when I think of her watching MY FATHER, THE HERO and laughing out loud at the "I'm dying now!" exclamation from the father to his daughter when she's telling him the latest in a string of lies she fed to her boyfriend...*chuckle*.  The thing is, she wasn't always conventional, but even when she was, she was remarkable.  You could always tell that she enjoyed her life work (not just her calling from higher up, but TEACHING) with her very soul and THAT in turn inspired me to do the best I could in every thing I tried.  Win or lose, it's the TRY that mattered, not the outcome.  The fact that I could say I did my best was worth more than a thousand first place ribbons. 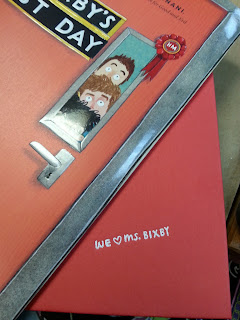 In closing, I would like to say THANK YOU to all the educators that have touched my life along the way as well as extend it one step further to those in the role of teacher today. Your efforts don't go unnoticed and their effects will be felt long after the final school bell rings.  I highly recommend this read to the target age group but perhaps even more so to the adult readers reading this right now.  I'm telling you, it'll really touch your heart, through and through.


Special thanks to Debbie at Walden Pond Press for the chance to participate in this AMAZING tour as well as the copy for review.  (THANKS!) For more information on this title, the author, or the publisher, feel free to click through the links provided above.  This title is IN STORES NOW via Walden Pond Press, an imprint of HarperCollins Publishers, so be on the lookout for it on a bookstore shelf or virtual retailer of your choosing.


BE SURE TO CATCH ALL THE STOPS ON THE TOUR FOR OTHER POINTS OF VIEW AND AMAZING SHARES!

Yeah! Let's here for all the educators out there. Loving the cover of what sounds like a great story. The Ms Bixby of my school years was my RE (Religious Education) teacher Mr Solly.