Today, we're playing host to a Pump Up Your Book tour starring book two in the Lauren Reardon series by Alex Gordon via Harper Voyager.  Now, I know what you're thinking....how am I going to get into the series if you're starting with book two?  Not to worry friends...that's why MY post is a TWO book celebration.  You're welcome!  ^-^ So, what do you say, fair readers?  Should we get this party started?  First up, we have book one leading the way into paranormal territory that you've got to read to believe in....

About the book.....
When Lauren’s father dies, she makes a shocking discovery. The man she knew as John Reardon was once a completely different person, with a different name. Now, she’s determined to find out who he really was, even though her only clues are an old photograph, some letters, and the name of a town—Gideon.

But someone—or something—doesn’t want her to discover the truth. A strange man is stalking her, appearing everywhere she turns, and those who try to help her end up dead. Neither a shadowy enemy nor her own fear are going to prevent her from solving the mystery of her father—and unlocking the secrets of her own life.

Making her way to Gideon, Lauren finds herself more confused than ever. Nothing in this small Midwestern town is what it seems, including time itself. Residents start going missing, and Lauren is threatened by almost every townsperson she encounters. Two hundred years ago, a witch was burned at the stake, but in Gideon, the past feels all too chillingly present . . .

This was a stunning introduction to what promises to be an amazing series.

I'll be the first to admit, this was a HEAVY read.  I'm not talking size though, but rather material.  It steeps itself in history to some degree but builds its own world around a particular ill-fated event that sets everything in motion.  We are reminded that things are not always what they seem, time and time again, as Lauren learns that everything she knew was simply a version of truth.  Awfully disheartening at any age, but when familial loss is the catalyst that breaks the peaceful bubble we've been in, it hits us THAT much harder.  Poor Lauren, I really felt for her as she navigated this foreign land that she seemed ill-prepared for, but I kept the faith and was richly rewarded with both a strong character and an amazing read.

Though several characters well worth mentioning on the side of good AND evil, I feel I have to show my loyalty for Lauren herself.  She was thrown into something she knew nothing about, threatened beyond measure, and still showed up ready for more.  The secrets she uncovered were enough to unsettle most, and while she too was rattled, she didn't let it break her.  She pooled her strength, and owned her new abilities like nobody's business, leading to a spectacular showdown you won't see coming...

Now for the real star of today's tour.... Un unearthing her father’s secret past, Lauren Reardon discovered a shocking truth about herself. She is a Child of Endor, a sect of witches who believe they are the guardians of the “thin places”—areas across the globe where evil can seep through the divide between the worlds separating the living and the restless dead. At any time, she can be called upon to close one of these breaches and prevent demons from infiltrating our realm. When Lauren has a disturbing vision of an Oregon forest, she is drawn back to the familiar woods of the misty Pacific Northwest to investigate.

Locals had long whispered about an abandoned logging camp known as Jericho—of the strange disappearances and eerie sounds heard in the woods deep in the night. But these ghost stories only hint at the true evil lurking within the camp’s dilapidated buildings, a primeval malevolence far more terrifying than Lauren’s darkest imaginings. And now, Lauren must face this evil, even if it takes her life . . . even if it costs her soul.


Yes, you CAN read this title as a stand alone, but really....WHY would you want to?

Having the first book under my belt, I was much more comfortable with all that was to come, even if it was SO CREEPY, at times stomach turning, and all around evil.  *gulp*  Yep, just when Lauren might have thought she'd get a bit of a break, things take a turn for the magical-interference-required and she's called away to tend to the first of presumably many unusual situations that the original Mistress Mullins was referring to when she turned Lauren out from the wasteland.  Well, the first of several if she SURVIVES that is.  Again, having gotten to know our leading lady during book one, we already know her pension for jumping head first into danger and giving selflessly until there's nothing left in order to see a problem to resolution.

The only thing is that she's NEW to all of this and there are those that would lead her astray as easily as they breathe if it suits their needs...and trust me, it certainly does this time around.  Lives hang in the balance as does the future of Gideon and other magical communities, but if someone doesn't do something, there are worse things than financial ruin and ghost towns awaiting them.  Things much MUCH darker.  Things that wait in the night and answer only to their master .  Things that can cross over from our nightmares to our waking hours and wreak as much havoc in day as in night.  Things that I'd avoid at all costs...though it doesn't look like Lauren will have the luxury.

All in all, a series I'd highly recommended, but not to be entered into lightly.  We've formidable adversaries with an untrained leading lady suppose to lead the way from darkness to light, but truly just trying to stand on their on two feet. As I said, it's pretty heavy in material but the payoffs are well worth it in the end. 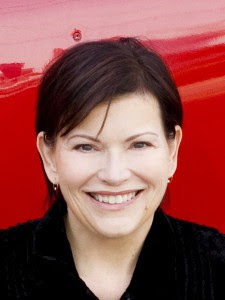 Alex Gordon resides in the Midwest. When she isn’t working, she enjoys watching sports and old movies, running, and playing with her dogs. She dreams of someday adding the Pacific Northwest to the list of regions where she has lived. She is the author of Gideon.

Special thanks to Tracee at Pump Up Your Book for the copies for review and chance to bring this tour to you.  (THANKS!)  For more information on these titles, the author, the publisher, or those tours on the horizon, feel free to click through the links provided above.  BOTH titles are available now via Harper Voyager, so be on the lookout for them on a bookstore shelf or virtual retailer of your choosing.

Superb. Just enough information to let us know what we're in store for but not telling us the entire story. Way to go superb reviewing