BLOG TOUR: Read Me Like a Book by Liz Kessler

Today, we're playing host to a Candlewick Press blog tour starring ﻿a title that just celebrated its book birthday this month.  It's from an author that has established herself in the Middle Grade arena and is now making the jump to Young Adult Fiction with a story that 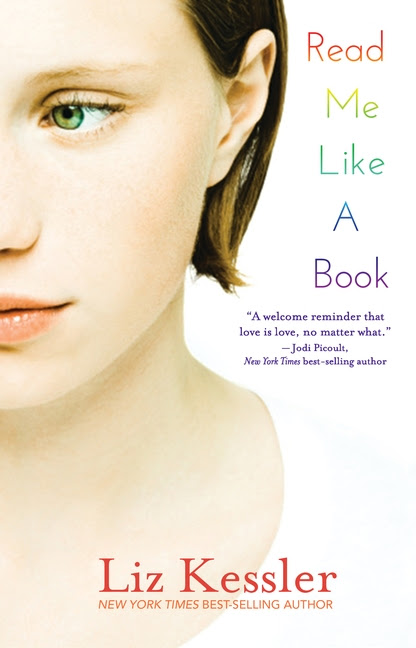 About the book...
Ashleigh Walker is a mediocre student with an assortment of friends, a sort-of boyfriend, and no plans for the future. Then a straight-from-college English teacher, Miss Murray, takes over Ash’s class and changes everything. Miss Murray smiles a lot. She shares poetry with curse words in it. She’s, well, cool. And she seems to really care about her students. About Ashleigh. For the first time, Ash feels an urge to try harder. To give something — someone — her best. Before she knows it, Ashleigh is in love. Intense, heart-racing, all-consuming first love. It’s strong enough to distract her from worrying about bad grades and her parents’ marriage troubles. But what will happen if Miss Murray finds out Ashleigh is in love with her?

This is the story of one young woman's awakening to not only the world around her, but to her true self.

Ash is pretty much a good kid.  She's not the most popular, most outgoing, or highest achieving, but like the rest of us (and her fellow teens), she's just trying to find her way.  It's an obstacle at any age to truly find oneself, but in our formative years with university looming, and adulting on the horizon, it can feel like the weight of the world.  Add to that a home life in chaos, a friendship on the rocks, and a pregnancy scare, and yeah...I think we can agree that the stress is pretty monumental...but what if something unexpected happens.  What if one piece of the puzzle all of a sudden feels like it fits better than ever?  What if that one piece had to do with school but not JUST school in general but one particular teacher (a substitute, no less) that just seems to really SEE you, leaving you seeing yourself as never before?  Now you're questioning things you never imagined and the foundation you've built your world upon is cracking like the desert sands under the hot sun.  Your future was unknown before but now, seeing the road itself regardless of the direction taken seems an impossible task.  The good news for our leading lady is that she has a good head on her shoulders and despite the momentary break up with her bestie, she'll have the support she needs...but finding her balance is gonna take more than a shoulder to lean on.

I gotta say, I wasn't certain where this story was heading at first.  I mean obviously I liked Ash's character, and while Cat was a bit of a bad influence (and a terrible liar), she was actually pretty cool, but at a certain point I was worried it was going to take a "headliner avenue" I wasn't prepared to travel.  Much to my relief and the integrity of the story, the author knew just what she was doing and led us as well as her characters to a somewhat safe harbor.  The obstacles she faces as the awareness breaks over her felt very real, as did the unfortunate reactions of some within her inner circle.  The most shocking perhaps was that of her mother versus father.  I wouldn't have guessed the acceptance and rejection split as they were and from the parties it was directed from.  Honestly, I wanted to hug the one and smack the other.  I mean, it was hard enough for Ash to acknowledge what she felt let alone be let down by her parents yet again.  Honestly, perhaps I was just spoiled, but I always knew I could depend on dear old mom regardless of the issue.

In the end, we meandered back to somewhat what I was expecting and told a story that was something more than it first seems. It's not about a sweeping plot line or earth shattering conflict, but it's quiet and loud all at the same time.  It speaks to being your true self in all aspects of your life and how the only truly wrong way to live is in hiding oneself away.  Ash was an endearing character as was the influential Ms. Murray, and I think teens (and adult readers) will really recognize their own struggles within her voice regardless of how mirror image they may or may not be.

Liz Kessler is the author of the best-selling Emily Windsnap series, the Philippa Fisher series, and the middle-grade novels North of Nowhere, A Year Without Autumn, and Has Anyone Seen Jessica Jenkins? She lives in Cornwall, England.

Special thanks to Anna at Candlewick Press for the ARC for review as well as the chance to bring this tour to you.  (THANKS!)  For more information on this title, the author, or the publisher, feel free to click through the links provided above.  This title is available now via Candlewick Press, so be on the lookout for it on a bookstore shelf or virtual retailer of your choosing.  To discover more points of view on today's selection, catch up with the rest of the tour as it makes its way through the blogosphere....