#TGIM: Your BEST and WORST with Jessica Brody's, #AWeekofMondays!

For those already making the blog rounds, this is post TWO of the day here no the site.  This time around, we're still in the Young Adult arena, but not in a review capacity.  Tricked you, didn't I?  Not to worry, Monday's can be that way sometimes.  After all, who wants to celebrate a Monday?  Ah, but that's just the thing, WE DO...along with my fellow bloggers, readers, and bookish folks at MacMillan Children's Publishing Group.  That's right!  We've teamed up with these fab people to bring you a celebration most unlike those you've seen.  It's aim is to up the excitement about a forthcoming release, here's a quick 'about the book' for those of you that just can't wait... 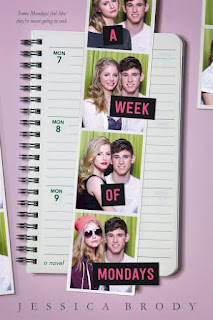 ...and to get Monday's off the hook for their bad rap. After all, they didn't ASK to be put smack dab at the beginning of the week now did they?  I mean, perhaps they WANTED to be a Friday, or perhaps they are content with their placement in the seven day stretch because it doesn't just mean the end of weekend fun but the POSSIBILITY of the wonders the week has in store?  Something to think about...at another time, because today we're bringing you something special, something different, something creative with a tinge of reality and a dose of wishful thinking.  It all began with a writing prompt...

Curious...curious...CURIOUS.
I mean, the possibilities are endless because we're not restricted to reality.  No, siree!  We've been given free reign to write our own Mondays, no strings attached!  So, I did what any wordy, bookish person would do.  I didn't limit myself to FACT (as in could actually happen) or FICTION; I chose BOTH.  Oh and by the way, this was WAY harder than it sounds!  Creative license to do anything you want is a BIG BALL OF YARN to let loose!  Let's see what I came up with, shall we?  ^-^

FACT:  I keep plugging away and reach my dream job of working in the publishing industry bringing the joys of reading to the masses and generations to come.  In the process, I become well known for a keen eye, friendly demeanor, and compassionate heart, earning the respect of all those I work with, attracting the love of my life who is my match heart and soul, and earning a reputation that precedes me in the best way possible.

FICTION:  I'm Jenny (from my favorite YA trilogy, The Forbidden Game) and I've not only saved my friends from their worst fears, but faced my own while still managing to finagle a way for Julian to live...and not just as a stranger.  His self-sacrificing turn at what should have been the end of our story spoke volumes and though a seeming mismatch at first, it's easy to see that all along, he really cared.  So, I say goodbye to the boyfriend, and hello to a new beginning with eyes wide open and that pesky board game burned to the ground.

FACT:  Anything to do with harm coming to my family, friends, or fur babies.  The details would be inconsequential because I would be inconsolable and no matter what was said or done, you might as well talk to a brick wall.  I'd either be wallowing with a river of tears pooling in my shoes, or ready to blow things with the sheer power of my mind.  You don't mess with this girl's family.

FICTION:  I was chosen to be Katniss Everdeen in a new version of the Hunger Games but instead of opponents that could potentially be allies, the other contestants were newly made zombies, and werewolves fully committed to their new way of life with no thoughts of turning back.  The events would be televised as is protocol, but any successes I achieved would be scrapped on the virtual cutting room floor so as not to encourage any in favor of my actually making it out alive.  The real icing on the cake would be that I WOULD make it out against all odds, only to find out that my promised freedom was more of a joke than Snow growing a conscience.