I am thrilled to be hosting a spot on the HEIR OF LIES blog tour by Mallory McCartney, hosted by Rockstar Book Tours! Check out my post and make sure to enter the giveaway! 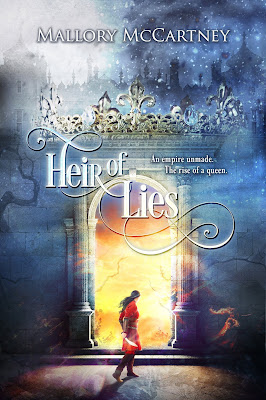 “Hope was a dangerous thing. It could consume every dream and make them take flight, becoming wild daydreams in one’s heart and mind. Or hope could incinerate everything you thought you knew, burning you down to your core, leaving you raw and exposed for the world.”

Emory Fae has only known one thing—life at The Academy, a school for those who have special abilities. Following in her parents’ footsteps, the pressure to uphold their dream falls on her and one of her best friends—Adair Stratton. An outcast and feared by most, Adair longs to break away from the expectations dictating his future. With whispers of dark magic spreading across Kiero, Adair starts to doubt The Academy is all it seems.

An unexpected visit ignites new tensions as the roguish king from across the Black Sea, Tadeas Maher of the Shattered Isles, and his heir, Marquis Maher, sail to Kiero. Notorious for their pirating and wrath, for the first time in years, they demand the Faes listen to their proposition for a new treaty. Caught in the middle of politics, Adair and Emory, with the help of their best friends Brokk and Memphis, search for the one thing that matters the most—the truth.

Their world is tipped upside down as unlikely alliances are made, and war ravages Kiero. Through the throes of betrayal, lies, hidden magic, and love, Adair is faced with a life changing decision. Will he fight or bow to the darkness within?
But, Adair’s decision will change the course of Kiero forever, setting in motion irreversible destinies for everyone at The Academy as Emory Fae rises as heir.

Heir of Lies is the first book in the bestselling Black Dawn series.

The Black Dawn series is re- releasing and “Heir of Lies” (book one) is coming April 21 2020! This edition will have an exclusive map and bonus content!

Hope was a dangerous thing. It could consume every dream and make them take flight, becoming wild daydreams in one’s heart and mind. Or hope could incinerate everything you thought you knew, burning you down to your core, leaving you raw and exposed for the world.  As Brokk walked down the hallway, looking for Memphis, his world was ripped apart in a split second. The hallways were quiet, which should have been his first sign that something was off. Class had just ended for the afternoon, and like every other day, Brokk’s blood was boiling after seeing Iasan. His teacher had become predatory toward him, trying to push him to his edge but always in ways only noticed to Brokk, putting on the persona for the other teachers.  Iasan was only trying to ensure a bright future, they said. By grooming him into a lethal weapon that would kill on command. Swearing under his breath, Brokk was hoping for the blissful distraction that the hallways of the Academy always provided. His fellow classmates had a flair for the dramatics; it was guaranteed he would be swept away in their display, along with his thoughts. Instead, his footsteps echoed as he continued on, dread pooling in his stomach and making it churn. Turning the corner, he was about to stop and go back when he saw him. Crumpled in the middle of the hallway, his blond hair splayed out around him and his skin drained of any color, he looked dead. Alby’s appearance flickered as he turned invisible in a panic.  “What happened?!” Brokk’s voice cracked, as he sprinted, dropping to his best friend’s side in an instant. Alby’s eyes were wide, as he grappled with his words, his mouth opening and closing. Brokk urged, “Alby, what happened?” The doors at the end of the hallway were thrown open, and Brokk stood, slowly taking in the group rushing toward them. Roque stormed down the hall, Nei and Bresslin at his heels, Tadeas and his entourage flanking them. Roque looked at them, narrowing his eyes to slits. “Foster! What are you doing here? I told the teachers to issue a temporary room curfew effective immediately.” Roque’s words were just white noise, as Brokk saw Adair filing slowly in at the end of the hallway, looking like he had just been through a war.  “Foster, I suggest you answer the question,” Roque spoke quietly and slowly, and Brokk flicked his gaze up to the man for a second, truly taking him in. And what Brokk saw, for the first time in years, scared him. Rage contorted their leader’s features into one unrecognizable. One that consumed the man and left a person that had nothing left to lose. He took a step back. “I was just looking for Memphis.” Alby cut in, “He did it. Adair used his ability against Memphis.” Brokk barely took in the next couple of seconds. Roque stiffened, turning slowly to look at Adair limping behind them all, his hooded eyes swept down to the floor, not realizing that everyone had focused in on him. He hurt Memphis.” 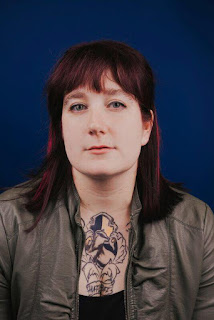 Mallory McCartney currently lives in Sarnia, Ontario with her husband and their three dachshunds Link, Lola and Leonard. When she isn’t working on her next novel or reading, she can be found day dreaming about fantasy worlds and hiking. Other favorite pastimes involve reorganizing perpetually overflowing bookshelves and seeking out new coffee and dessert shops.