Today, we're teaming up with TLC Book Tours to kick off the bloggy celebration starring a forthcoming release via Permuted Press!  It features the THIRD and FINAL BOOK of the Initiation from author Chris Babu, a Young Adult Dystopian series/trilogy you don't want to miss.  If you're familiar with the first two books, you KNOW you're in for a treat, and as I'm not one to deprive others, let's DO this!  Ready, set, let's welcome today's blog tour guest and book of choice... 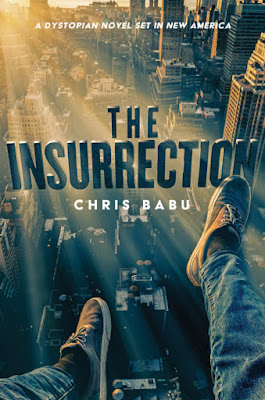 About the book...
Having survived the Initiation and expedition, one battle remains: the fight for the heart and soul of New America.

Drayden and his friends, enlisting the help of Professor Worth, must find a way back to New America before the Guardians imperil their return. But for these teens, their problems are only beginning. The Bureau, which never expected them to survive the expedition, will do everything in their power to prevent New America’s darkest secrets from getting out.

Drayden’s only hope is the insurrection led by ally Kim Craig. The David versus Goliath battle between good and evil, between truth and lies, will push Drayden to his breaking point and require bravery, self-acceptance, and above all, belief in himself. Backed by the will of the citizens, he’ll need to engineer an ingenious strategy to defeat the all-powerful authoritarians. The question is, will it be enough?

This was the story readers were waiting for...

Here, we catch up with Dray, Charlie, Catrice, and Sidney, just after everything has gone down that went down in book two...and no, I won't spoil it for those that haven't read it.  So much has transpired, but so much is still in store for this motley crew that it's not even funny.  Okay, well some of it is, but more in the oh-my-gosh-we're-so-stressed-out-that-we're-more-than-a-tad-punchy sorta funny, than the HA HA HA kind.  I was beside myself through most of the story as I saw the girls trying SO HARD to score that money for the boat ride to save their families, Charles struggling to operate at full capacity after that hella bad accident, and Drayden hoping against hope that he could find his mother once again.  The bonds they forged thus far are seriously put to the test, but they're about to discover (with a little outside guidance along the way) that there is nothing they can't achieve when they put their hearts and minds to the task, and no danger is insurmountable when they have each other's backs.

In the end, it's filled with the unharnessed emotions of teenage-dom, responsibility beyond their years, dangers that would make the strongest Guardians quake in their camos, and an ending that you won't soon forget.   If you haven't had the pleasure of reading this trilogy as of yet, I highly suggest you start at the beginning and binge your way through. 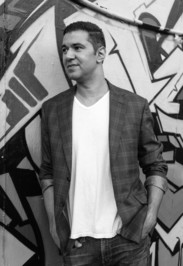 Chris Babu grew up in North Haven, CT, playing soccer and the violin in his free time. After devouring The Shining under the covers with a flashlight when he was eight, Chris was hooked on fiction. He’s always had a thing for young adult books. But he’s also a major science and math nerd—physics being his favorite—and he has a math degree from MIT.

For nineteen years, he worked as a bond trader on Wall Street, riding the subway to and from work every day. He traded mortgage-backed securities for Bank of America and then Deutsche Bank, where he eventually ran the MBS trading desk. Now Chris writes full-time, always with his trusted assistant Buddy, a 130-pound Great Dane, who can usually be found on his lap. They split their time between New York City and the east end of Long Island. Their omnipresence at home drives his wife Michelle and daughter Lily crazy

Special thanks to Trish at TLC Book Tours and Devon at Permuted Press for the chance to bring this tour to you as well as the copy for review. (THANKS!) For more information on the series, the author, the publisher, or this tour, feel free to click through the links provided above. BE SURE TO CHECK OUT THE REST OF THE TOUR IN THE BLOGOSPHERE AND OVER ON INSTAGRAM!

I love a trilogy that really delivers in the end!