Today, we've a stop along the Rachel's Random Resources tour featuring the work of Deborah Klee. From the sound of things, it's a story that will move your heart while making you ask yourself, am I truly living my life or just going through the motions?  But that's just my own first impressions...let's see what YOU think!  Ready or not, today's title in the spotlight is on deck... 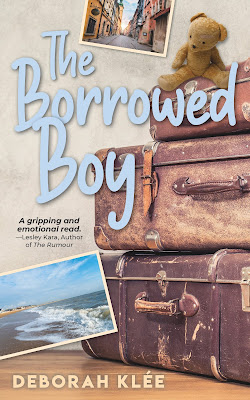 The Borrowed Boy
by
Deborah Klee

About the book...
A borrowed boy, a borrowed name and living on borrowed time.

What do you put on a bucket list when you haven’t done anything with your life? No interesting job, no lovers, no family, no friends. Believing she has only weeks left to live, Angie Winkle vows to make the most of every minute.

Going back to Jaywick Sands, is top of her bucket list. Experiencing life as a grandmother is not, but the universe has other plans and when four-year-old Danny is separated from his mum on the tube, Angie goes to his rescue. She tries to return him to his mum but things do not go exactly as planned and the two of them embark on a life-changing journey.

Set in Jaywick Sands, once an idyllic Essex holiday village in the 70s, but now a shantytown of displaced Londoners, this is a story about hidden communities and our need to belong.

Angie arrives in Jaywick with Danny. She has carried him for nearly two miles and they are both hot, tired and exhausted. It is getting late and Angie needs to return Danny to his mum that day. She carries him into the sea to try and freshen him up a bit.

Danny clung to her at first, a look of fear and then excitement creasing his face. A wave lifted them and Angie shrieked, ‘Whee!’

Danny’s arms relaxed around her neck as he searched for the next big wave.

‘Is it coming? Is it coming?’ Angie dipped down so that the sea reached their chests, ready to catch the next wave.

‘Whee!’ Danny whistled in her ear.

It was great fun. The cherry on the cake of a perfect day but somehow, they had to get back to London. They were both soaking wet, no towel or change of clothes, apart from a spare pair of knickers Angie kept for emergencies. It was past eight and she had no idea how she was going to get them back to Clacton, let alone London. ‘What are we like, Danny boy? What are we like?’

Angie retraced the route she had taken so many times before, from the sea back towards Grammy and Gramps’s chalet. But nothing was the same. What had happened to the pretty gardens? The handkerchief lawns bordered with marigolds and nasturtiums?

An abandoned fridge balanced against a low brick wall in one front yard, black sacks of refuse in another. A TV with a smashed screen and an old pushchair spilled onto the pavement from a garden strewn with debris. Angie swung Danny onto her hip. He couldn’t walk barefoot here – not like the old days. She saw a supermarket trolley dumped in a garden and dragged it out onto the street. Shame she hadn’t found it sooner. Angie swung Danny into the trolley; it would serve well as a pushchair.

What had happened to Jaywick? Angie kept expecting to turn a corner and see everything as it had been back in the seventies. But there were no wide clean streets. No neighbours sitting out, drinking tea and chatting. They reached the main street, the one they had to cross to reach Grammy and Gramps’s. It was just as grey and dismal.

In the seventies the street buzzed with happy holidaymakers. Angie recognised the pub, a café, and the amusement arcade, but there was little else. Shops were boarded up and graffitied. There had once been a hairdresser and a toyshop. All that had gone. Tarnished and damaged.

Angie bit back her disappointment. She was a fool thinking that she could turn back time. The world was a dark and dirty place.

Angie sat on a garden wall opposite the Seashell Café – a closed sign on its door. At least their clothes had started to dry in the sun. At times like this Angie wished she owned a phone. She didn’t have the energy to push Danny in the trolley back to Clacton and they were both too tired to wait for a bus. That’s if there was a bus to Clacton that evening.

A car engine turned over, then died. Again – it whirred, then spluttered. A girl with a funky haircut, longish one side and shaved the other, sat at the wheel. She tried again.

Angie peered into the car. ‘You’re not going to get her going like that.’

The girl glared. ‘Fuck off.’

The girl sunk back in her seat. ‘Fuck, fuck, and fuck!’ She slammed the steering wheel and blasted the horn.

‘Release the bonnet.’ Angie knew everything there was to know about Ford cars produced between 1965 and 1980. She had a full set of Haynes manuals and had pretty much memorised them. Couldn’t drive, but she could do basic maintenance and repairs.

The girl got out of her beaten-up Ford Fiesta. ‘I’ve gotta get her going. I need a car for my work.’

‘Watch Danny and I’ll take a look. If I get her going the deal is you give us a lift to Clacton.’

‘Sure.’ The girl shrugged.

‘There’s nothing wrong with the battery or starting system.’

Angie rooted in her bag for the wet knickers, the next best thing to a rag. She prodded and poked. Cars had changed a bit since the eighties but not so much that she couldn’t apply her basic knowledge.

‘I reckon the compression in your engine cylinders is low. Have you got her wet or used dodgy fuel?’

The girl shrugged again. ‘Yeah and yeah. Rain leaks in because of the rust and I’ve cadged containers of petrol when I’ve run out – so could be. But can you fix her?’

Angie wished she could get the car working that evening. It was their only hope of getting to Clacton. 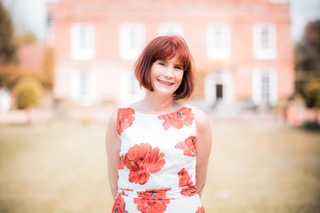 Deborah has worked as an occupational therapist, a health service manager, a freelance journalist, and management consultant in health and social care.

Her protagonists are often people who exist on the edges of society. Despite the very real, but dark, subject matter her stories are uplifting, combining pathos with humour. They are about self-discovery and the power of friendships and community.

The Borrowed Boy, her debut, was shortlisted for the Deviant Minds Award 2019. Just Bea, her second novel will be published in 2021.

Deborah lives on the Essex coast. When she is not writing she combines her love of baking with trying to burn off the extra calories.