WILD HORSES ON THE SALT by Anne Montgomery - REVIEW!

Hi there!
Welcome back to Satisfaction for Insatiable Readers.
Today, we're shining the spotlight on a title released a few months back from author Anne Montgomery.  I've read her work once before (The Scent of Rain) and was thoroughly moved, so when I was approached about this release, I wasn't hesitant to agree, but rather curious what her story would bring.  This time around, it's a work of Contemporary Fiction featuring a leading lady that needs a fresh start far from the hard times she's been living in, but that new beginning may come at an awfully high price when her past comes round to haunt her.  Ladies and gents, today's book of choice is... 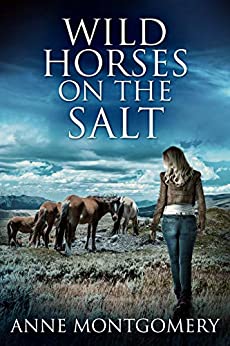 Wild Horses on the Salt
by
Anne Montgomery
9788649678124
Liaison: A Next Chapter Imprint
About the book...
Can Rebecca find hope in the wilds of the Arizona desert?
Escaping her abusive husband, Rebecca hops the red-eye to Arizona. There, Gaby Strand - her aunt’s college roommate - gives her shelter at the Salt River Inn, a 1930’s guesthouse located in the wildly beautiful Tonto National Forest.
Becca struggles with post-traumatic stress, but is enthralled by the splendor of the Sonoran Desert. Soon, she meets Noah Tanner, a cattle rancher and beekeeper, Oscar Billingsley, a retired psychiatrist and avid birder, and the blacksmith, Walt. Thanks to her new friends and a small band of wild horses, Becca adjusts to life in the desert and rekindles her love of art.
After Becca's husband tracks her down, she has to summon all her strength. But can she finally stop running away?

AMAZON  |  BOOKSHOP.ORG
~~~~~~~~~~~~~~~~~~~~~~~~~~~~~~
We meet Becca at the lowest point in her life.  Her aunt has just help secret her away from her abusive husband, and she's just coming to grips with the reality of it all.  The systematic way her cut her off from everyone and everything she loved.  The violent turn from flattering gentleman caller to degrading possessor, as he no longer built her up, but tore her down every chance he got.  The outbursts that were no longer outbursts but everyday moments that simply had no end, and the endless stream of doctor appointments to fix the damage he'd inflicted with oh so many excuses as to what happened.  Enough was enough...it wasn't getting better, it wasn't going to get any better, and it was time to go.  And go she went...but trouble not faced head on has a way of cropping up again when you least expect it...and just when Becca is starting to gain her footing once again in this magically healing place, the worst happens with potentially deadly consequences.  Good thing she has friends now that will stand by her side.  Good thing she has someone to love that is good for her soul.  Good thing she is stronger now than she ever thought she'd be because when the moment comes, it's gonna take everything she has to face it AND him down.
While we're watching Becca grow back into her self, we also get to discover more about the wild horses living in this part of the country, and more specifically one stallion that admits an unusual addition to his team.  This particular beauty is hurt by some seriously dullard humans, and while the rescue group is trying to aid in his recovery, you heard about wild horses and fences?  Yeah, they're not so keen on them.  He makes a getaway and so begins a long journey back to his family with a wooly little companion by his side.  I'm sorry, but that little add in, that little friend, made him stand out not only to those whose paths they crossed along the way, but to me as well.  It showed what true empathy is, what true family is, what truly caring for life in all its forms really is, and that's a lesson we humans certainly need a good brush up on.
If I've learned anything from this story, it's that there's still beauty to be found in the world even when you think you've reached your rope's end, your true self is enough for those that REALLY count, and there's no shame in admitting you were wrong or asking for help. Recommended for adult readers due to some violent content; possible trigger issues regarding abuse...it's not openly on display, but there's enough to get the gist, and a scene separate from that issue of violence.
~~~~~~~~~~~~~~~~~~~~~~~~~~~~~~
About the author...
Anne Butler Montgomery has worked as a television sportscaster, newspaper and magazine writer, teacher, amateur baseball umpire, and high school football referee. Her first TV job came at WRBL-TV in Columbus, Georgia, and led to positions at WROC-TV in Rochester, New York, KTSP-TV in Phoenix, Arizona, and ESPN in Bristol, Connecticut, where she anchored the Emmy and ACE award-winning SportsCenter. She finished her on-camera broadcasting career with a two-year stint as the studio host for the NBA’s Phoenix Suns. Montgomery was a freelance and/or staff reporter for six publications, writing sports, features, movie reviews, and archeological pieces. Her novels include: The Scent of Rain, Nothing But Echoes, and A Light in the Desert. Montgomery teaches journalism at South Mountain High School in Phoenix, is a foster mom to three sons, and is an Arizona Interscholastic Association football referee and crew chief. When she can, she indulges in her passions: rock collecting, football officiating, scuba diving, and playing her guitar.
FACEBOOK  |   SITE  |  TWITTER  |  INSTAGRAM
~~~~~~~~~~~~~~~~~~~~~~~~~~~~~~
Special thanks to Lindsey at Smith Publicity, Inc, and to author Anne Montgomery for the copy for review. (THANKS!) For more information on this title, the author, the publisher, or those promotions on the horizons, feel free to click through the links provided above. This title is available now, so be on the lookout for it at virtual retailer of your choosing.
Until next time, remember...if it looks good, READ IT!

I love your review especially the last paragraph. I haven't heard of this book tho, thanks for putting it on my radar.

Thank you for your kind words, Gina.