Hi guys and gals!
Welcome back to Satisfaction for Insatiable Readers.
Today, I am OUT OF THIS WORLD excited to be joining Walden Pond Press as they make their way through the blogosphere with the latest release from author John David Anderson!  It's a Children's Science Fiction novel, the first in a planned duology (oh the suspense!), that while dealing with many different races, species, and planets...still has a very human takeaway message...or five.  So, if you're ready to see just what lies beyond the horizon, GET READY because we're blasting off with today's blog tour guest and ebook of choice... 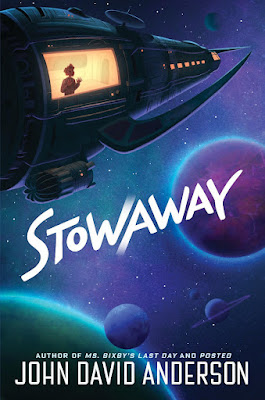 Stowaway
by
John David Anderson
9780062985941
Walden Pond Press
About the book...
The beloved author of Posted and Ms. Bixby's Last Day returns with the first book in a coming-of-age sci-fi duology about Leo, a kid trying to navigate the galaxy in order to save his family—and, possibly, the planet Earth.
When scientists discover a rare and mysterious mineral buried in the Earth’s crust, they have no idea that it just happens to be the most valuable substance in the entire universe. It’s not long before aliens show up to our little corner of the galaxy offering a promise of protection, some fabulous new technology, and entry into their intergalactic coalition—all in exchange for this precious resource. A material so precious that other alien forces are willing to start a war over it. A war that soon makes its way to Earth.
Leo knows this all too well. His mother was killed in one such attack, and soon after, his father, a Coalition scientist, decides it would be best for them to leave Earth behind. It’s on this expedition that their ship is attacked, Leo’s father is kidnapped, and Leo and his brother are stranded in the middle of space. The only chance they have is for Leo to stow away on a strange ship of mercenary space pirates bound for who knows where and beg the captain to help him find his father.
But the road is dangerous, and pirates, of course, only look out for themselves. Leo must decide who to trust as he tries to stay alive and save his family, even as he comes to understand that there aren’t many people—human or alien—that he can count on in this brave new universe.
🪐     🚀     🌑     🚀     🪐 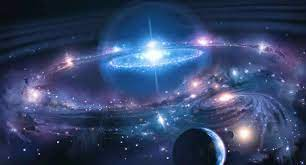 Guys.  GUYS.  Guys! GUYS!
This story?  The one we're diving into right now?
Well, it may sound cliché, but it was OUT OF THIS WORLD!  Whether you're a die hard science fiction fan or simply a dabbler that loves a good story no matter where it takes place, this one is for you!
Leo is our little leading man, despite not knowing that it the direction his story is heading.  Once upon an EARTH, he had an ideal life.  Mom and Dad at hand, a loving yet annoying older brother close by, a house, a cat, neighbors, trees, and beaches along which to collect seashells.  It may not sound like much, but it was paradise...until one day that paradise came to be noticed by others not of this world.  It seemed like a peaceful match, sharing knowledge, technology, RESOURCES, and things went well, until they didn't and they landed smack dab in the middle of a galactic war.  They joined the good fight, making choices that were suppose to hold their shrinking family together, and managed to do so for a while.  They built a life they never asked for in a place they never imagined, but heartache came knocking once again, and this time it was out for annihilation.  Some quick thinking on a big brother's part managed to secure someone a chance to make it through, but the obstacles ahead, Leo's inability to leave them behind, and that overwhelming desire to see his family once again, may put them all in harm's way.  Good thing quick thinking runs in the family.  Good thing leading with one's heart is a virtue not a hardship.  Good thing there are still those in the universe that we can call friend...even if they may be the most unlikely of candidates.
Guys, guys, GUYS, GuYs, GUYS!  The adventure that awaits at every turn of the page will leave you feeling like you've just gazed at the most amazing starfield and can't look back down.  I loved how we got caught up on the past while still driving forward in the present.  I loved the varied cast of characters and how you could never really pin them down in the best way possible!  I loved the unexpected moments of laughter, violence promised (but not overtly so!), and awkward moments defused in ridiculous ways!  Boo's kiss...Skits rescue...Leo's inhaler...all moments among the moments I won't soon forget and YOU should watch for!  And yes, it ends with loose ends because it IS a duology, but not so many that you don't get a clear picture of where we've landed after all is said and done.  I know I'll be eagerly awaiting the second release much as Boo awaits his hot cup of gyurt!
🪐     🚀     🌑     🚀     🪐
About the author...

John David Anderson is the author of many highly acclaimed books for kids, including the New York Times Notable Book Ms. Bixby’s Last Day, Posted, Granted, One Last Shot, and Stowaway. A dedicated root beer connoisseur and chocolate fiend, he lives with his wonderful wife, two frawesome kids, and clumsy cat, Smudge, in Indianapolis, Indiana. You can visit him online at www.johndavidanderson.org.

Special thanks to Debbie and the Walden Pond Press team for the chance to bring this tour to you as well as the ARC for review. (THANKS!) For more information on this title, the author, or the publisher, feel free to click through the links provided above. This title is available now, so click on over to snag your copy today, and be sure to check out the rest of the tour for more bookish fun!
August 15, 2021
Nerdy Book Club
August 17, 2021
Writer’s Rumpus
August 23, 2021
A Library Mama
August 24, 2021
Unleashing Readers
August 26, 2021
Satisfaction for Insatiable Readers
Until next time, remember...if it looks good, READ IT!
Posted by Gina at 12:30 AM