WHAT'S THE BUZZ?: The Brides of London by Vanessa Riley - REVIEW!

Hi there!
Welcome back to Satisfaction for Insatiable Readers.
Today, we're spreading a little pre pub BOOK BUZZ for a NEW 2-n-1 title COMING THIS MONTH from author Vanessa Riley and Entangled Amara!  Do you like Historical Romance?  Do you enjoy multi-cultural stories?  Do you love LOVE and tales that take you away from your current state of affairs, immerse you fully in someone else's somewhere else, and leave you not just fully satisfied, but wanting more?  Yeah, ME TOO and this is the book for you!  Ready or not, let's take a look between the epages of today's title in the spotlight... 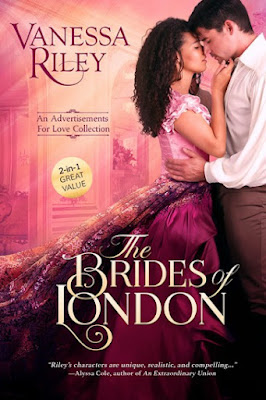 The Bittersweet Bride
Book 1
Widow Theodosia Cecil needs a husband to help protect her son. The former flower seller turned estate owner posts an ad in the newspaper, and no one is more surprised than she when her first love, the man she thought dead, reappears. Ewan Fitzwilliam has been at war for six years. Now, the second son of a powerful earl is back but his beloved Theo needs a husband and will not consider him. She believes
Ewan left her—in desperate straits—so she denies the feelings she still harbors for the handsome, scarred soldier. Theo and playwright Ewan must overcome bitter lies and vengeful actions that ruined their youthful affair. Theo must reveal her deepest secret in order to reclaim the love that has long been denied.
I had a hard time getting into this one initially, but once I connected, once I felt what Theo felt, once I understood where Ewan was coming from, once I knew how much each would give for the other to be simply happy, I knew I was hooked.  Seeing Theo gain her footing and take strength from the name given to her while others were still trying to take it all away.  Watching her protect those she loves with her body and soul, even to the detriment of her own happiness.  Being there when it all comes together at book's end to share in the...ending.  Hey, I'm not spoiling it for you and there is MUCH that happens straight through to the end in this one!  As for Ewan, I admit I wasn't his fan initially, especially when he kept being so easily swayed by those that would have anything but his best interests at heart.  However, once he got out from under their influence, once he realized everything he believed may have been something else entirely, he was much more likeable and easier to see as the potential happily ever after for our gal Theo.
- - - - - - - - - - - - - - - -

The Bashful Bride
Book 2
A friend's newspaper advertisement for a groom nets the most famous actor in London, Arthur Bex. Shy heiress Ester Croome proposes to elope with the handsome man, who she's secretly loved for two years, in order to escape an impending engagement arranged by her overbearing family. Trying to outlive the shadow of his villainous uncle, Bex needs to marry quickly—to a woman of good character. And smart, beautiful Ester fits the bill. But a harrowing trip to Gretna Green and dangerous abolition rallies prove to be a more treacherous stage than either imagined. Infatuation and a mutual love for Shakespeare might not be enough to bind a couple looking to outrun the chains and secrets of family and the past.
Now this one, I connected with immediately.  Was it the fact that I just came off reading the prior book and was in the right frame of mind?  Was it I was just exposed to the author's writing and was eagerly anticipating more?  Was it because the leading lady was someone bookish that held a crush from afar and couldn't possibly fathom how fortune may smile upon her?  Yeah, I'm going with the third option...but don't think that fortune part was all sunshine and roses.  It began with a sprig of lavender and an answered newspaper advertisement that wasn't even hers, and ended with a rush to the altar, a stark realization of what changes were to come, and an understanding of how different things would be than what they ever thought.  Their foundation seemed to be built on truth, and yet with all the hard realities they faced, or really SHE faced, one small secret, one blast from his past might simply be enough to blow a fatal hole in what they might have, if given the chance.
I adored Ester's character.  She seemed meek and mild, but when threatened or when those she holds dear were threatened, she was a force to be reckoned with.  She went from her sweet, sensible self to a temptress to a free working woman to a voice to support the cause, with the adaptability of the most seasoned actress...all in the name of love.  Speaking of the stage, her soon to be husband, Bex, is quite literally her dream come true.  He's been her heart's desire since she first saw him on stage, but he'd be the first to tell you not everything is as it seems...and in his case, he has a secret buried so deep that he's not sure who can be trusted with it, ever.  He's not a bad man, just a man with a past he'd rather not be connected to, and despite his attempts to expunge the unwarranted guilt from his conscience, it never seems to be enough.  But perhaps if he had one person in his corner, one person that could help him show the world that he is more than the past they hold him to...maybe, just maybe he can move forward.  That determination, that pureness of heart, that ability to see every man and woman as a man or woman, all endeared him to my heart.  Even when it seemed all was lost, I still held out hope for him, not something that can be said about the male lead in most of these types of stories.
So yeah, a great leading lady and a great leading man, with obstacles they didn't foresee and a future that may just not be...but glued to the page is most certainly where YOU will be!
~~~~~~~~~~~~~~~~~~~~~~~~~~~~~~~
About the author... Award winning, Amazon Bestselling author, Vanessa Riley, worked as an engineer before allowing her passion for historical romance to shine. A Regency era (early 1800s) and Jane Austen enthusiast, she brings the flavor of diverse, eclectic peoples to her stories. The author of Madeline's Protector, Swept Away, Unmasked Heart, The Bargain, and Unveiling Love, she has won the Beacon Award, the Colorado Award of Excellence, and placed in the International Digital Awards for her Regency romances. Vanessa Riley is a historical buff who has spent many years researching Regency society. During her undergraduate studies at Penn State, she gained a love of Western Civilization and took as many classes as she could while pursuing Bachelors and Master’s degrees in Mechanical Engineering. Her love of history has given her a passion for conducting precise research in architecture, customs, and rituals of the times. She lives in Atlanta with her career military husband and precocious child. You can catch her writing from the comfort of her southern porch with a cup of Earl Grey tea.
SITE  |  TWITTER  |  FACEBOOK
~~~~~~~~~~~~~~~~~~~~~~~~~~~~~~~

Special thanks to Riki at Entangled Publishing for the ebook for review. (THANKS!) For more information on this title, the author, this series, or the publisher, feel free to click through the links provided above. This title is set to celebrate it's book birthday August 31st, 2021 (woot woot!), so mark your calendar or click on over to your favorite online retailer to pre order your copy today!
Until next time, remember...if it looks good, READ IT!
Posted by Gina at 12:30 AM