Today, we join TLC Book Tours for a stop along their current promotion featuring a Historical Romance available now via Entangled Amara. The star of the show is a bookish young woman looking out for her family, and she'll do whatever it takes to set things right. Even take a fall...quite literally, I might add...and risk losing everything, including her heart. Ladies and gents, get ready, get set....READ ALL ABOUT today's blog tour guest and ebook of choice... 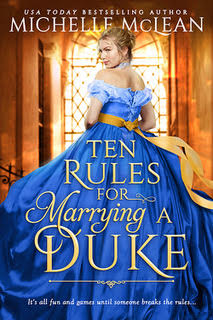 Ten Rules for Marrying a Duke
by
Michelle McLean
Entangled Amara
About the book...
Bookish Arabella Bromley never gave a fig for society’s rules...until her sister ran off with a man below her station. Now Arabella is desperate to restore her family’s ruined reputation to favor amongst the ton. She’ll have to marry quickly and well. But in order to carry off her plan, Arabella needs a duke...and she has just the rakish fellow in mind.
The Duke of Whittsley has an ungentlemanly tendency to disregard the rules. Unfortunately, a sense of mischief doesn’t excuse a high-ranking noble from family duty -- especially where it concerns producing a son. And that’s where he can’t quite resist Arabella’s distinctly outrageous plan: if he saves her family, she’ll give him an heir.
Now the deal’s been struck. They have one year to achieve their goals and ten iron-clad rules to keep them on track. And the only thing that can ruin their plan is the one thing they never planned on: love.
AMAZON
~~~~~~~~~~~~~~~~~~~~~~~~~~~
This story was absolutely darling!
Any bookish gal readers out there will easily see themselves in the smart shoes of this lovable leading lady as she strives to straighten out the mess her elder sister left behind in order for her younger sister to have a chance at a better future.  It matters not what position it puts her in because she is selfless like that, although she doesn't truthfully view herself as such.  She simply believes she is doing what any caring sibling would do for the others without regard for herself.  The thing is, it's often when we're NOT looking for something that it sneaks right up on us, and while she nor he wishes to be wed for traditional reasons, her ill-stated-but-smart plan fits them both rather perfectly.  The rule making session was to die for as they exchange witty banter, and wild ideas providing a few blush worthy moments, and lots of promising encounters to come...though I don't mean that exactly the way it sounds.  *ahem*
One of my favorite scenes revolves around the Duke's realization that she simply wants him...for his library!  (*uncontrollable laughter*)  Seriously though, her end game DOES in fact include access to a personal library, but it doesn't make the scene any less amusing or warmth inducing.  If you're anything like me, you'll fall for both characters straight from the start.  You'll wish with all your heart that they would simply TALK to one another at times instead of assuming they know how the other is feeling, or broaching the subject of rule bending, nay BREAKING.  For goodness sake, the miles that could have been saved by a few simple words and a dose of courage...but I digress.  That particular failure to present their true heart lead to another rather touching moment involving books, a note, and a rather specific piece of artwork.  *sigh*
All in all, a wonderful read that Historical Romance fans won't be able to keep their hands off of!
~~~~~~~~~~~~~~~~~~~~~~~~~~~
About the author... 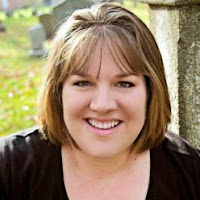 Michelle McLean is a jeans and t-shirt kind of girl who is addicted to chocolate and goldfish crackers and spent most of her formative years with her nose in a book. She has a B.S. in History, a M.A. in English, and loves her romance with a touch of suspenseful mystery. She resides in PA with her husband and two amazing children.
TWITTER  |  FACEBOOK  |  PINTEREST
~~~~~~~~~~~~~~~~~~~~~~~~~~~

Special thanks to Lisa at TLC Book Tours and the Entangled Publishing team for the ebook for review. (THANKS!) For more information on this title, the author, the publisher, this tour, or those on the horizon, feel free to click through the links provided above. This title is available now via Entangled Amara, so click on over to your favorite online retailer to snag your copy today! Be sure to CHECK OUT THE REST OF THE TOUR making its way through the blogosphere for more bookish fun!
Until next time, remember...if it looks good, READ IT!
Posted by Gina at 12:00 AM

I've been adding more historical romance to my reading list lately, looks like I have another to add! Thank you for being on this tour. Sara @ TLC Book Tours