13 Monsters Who Should Be Avoided by Kevin Shortsleeve

How has your year in reading been so far?
Busy?  Mine too.
So many great books have already been released and so many more are just around the corner, it's a bookish smorgasbord for readers wherever you turn.  Here to add to your piles of bookish goodness yet to be devoured, ME (hehe)...with another book you should know about.  The story is fun, the rhyming in measure, but there's a reason the picture books are called picture books, and this one is a fine example of it.  Today's book of choice is.... 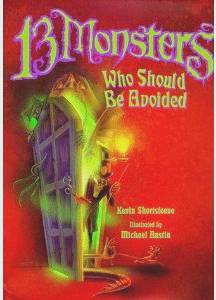 Professor LeGrand is on a mission.  He seeks to make you aware of a few monsters that you may want to avoid at all costs.  How can he make these recommendations?  He hails from LeGrand University....which apparently specializes in monster diversity; in other words, he's an educated expert that seeks to share his knowledge with the world and readers just like you and me.  The real question is...are you willing to listen? 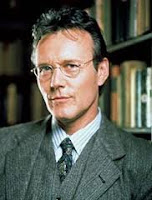 It may be just me, but Professor LeGrand reminds me A LOT of Giles from the TV series Buffy the Vampire Slayer.  Seriously!  In not only his demeanor (except for his hidden penchant for danger, but that's a topic for another post altogether), but his chosen line of work (education and preparation against monsters of all varieties)...and not to mention his appearance.  If you've read the book, you know what I mean as there is a great close up of him that really bares his resemblance....if you haven't, sit a little closer to the screen and take a peek at the cover.  He's just inside the doorway, behind the little critter getting pulled back into the door (O_O).  I think we all need a character like that though.  Bookish and worldly all at the same time and the Professor serves as a great guide to the world of monsters to which we are being introduced.

Learn about the Whichwayawawa's and their incesant indecisiveness (say that ten times fast).  Check out the star hopping Thumple-haired Land Ants and their tea craving.  Catch a glimpse of the Rare Re-Arranger who just might make a visit to your room and move everything from where it was to where it thinks it should be (NO!  Don't touch my books!  Back I say....back!).  As the introduction of the book warns you (nice touch by the way), these monsters are real...and any resemblance to imaginary ones is pure coincidence. 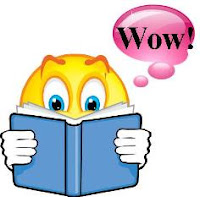 This is one of those rare books that leaves a reader like me a bit awestruck.  How so?  Well, while the story was great (which I love), the prose imaginative and full of feeling befitting the scenes and creatures being described (great descriptions really), it was the artwork that completed the picture (no pun intended).  Truly.  Each turn of the page leads you to some new fantastical (and sometimes a wee tad scary, but in a fun way...like a roller coaster...) monster you want to keep on your "should avoid" list...with good reason.  Their portraits as so created by the illustrator are of them in the act of doing what they do best....whether that be annoy, scare, sip from a river, or steal away in the dead of night with your socks (so that's where the matching sock always goes!  It's all the work of a Three-toed Albanian Snoring Sock Bat!).  It's a wonder how he managed to get them all to hold still long enough to create the visual masterpieces residing within these pages.  Though they have one chosen hue per page, they are not lacking in detail in the least; in fact, the heavy handedness with one color invites you to investigate the picture more thoroughly then you otherwise might have.  (Hmm...perhaps at heart he's a monster hunter --as his bio in the book alludes to-- and enjoys tracking them down one by one to share with the world.)

Anyway you look at it, from start to finish or finish to start, this is one for the child in us all...and especially for those curious in nature as you KNOW how they can get themselves into trouble (~whistles~).  Special thanks to Peachtree Publishers for the review copy.  (THANKS!)  To find out more about this book and all their magical reading adventures, be sure to seek them out online in one of their many haunts.  To get you started, they're on Twitter, have a blog (they are also celebrating their one year blogoversary so be sure to stop by and share a congratulation or two), and of course, their website.

Suitable for a 3 year old? Sounds like fun but I always wonder about some scary pics. Gosh I loved Buffy and Giles certainly grew on me through the years.

Michelle: Good question! Hmm..a three year old. Official word from the publishers website suggests starting age as 6. You never actually see the monsters in all their glory, more parts of them....a tentacle here....feet in the air there. (Oh and yes...much love for Buffy and all of the great cast. Love that show!) ^_^

Yes, I willing to listen. Sounds like a great book even if we don't get to see the monsters in all their glory. I think we sometimes worry about how scary these books are but surely they are not any more so than the books we were brought up on. That said I'm not too sure Hansel And Gretel didn't do me lasting psychological damage.

Looks awesome! You have an incredible number of followers, posts. and comments!

In fact, I'm your newest follower!

Petty Witter: Too right there....you hit the nail on the head with that one. ^_^

Keith Schoch: Hi there! Nice to meet ya and thanks for the follow! I try to run a follower/reader friendly site....feel free to look around.