Welcome back to another week here at the site...and my second post via smartphone. (This time I remembered to put it on the right blog...hehe.) Today we are part of a 8bookish birthday celebration for a new children's fiction novel from an unexpected source. How so? Well, this particular writer is well known for their works of adult fiction but the kid lit scene is a whole other ballpark. Truth be told though....I think you're really gonna like this one.&nbsp; Ready for it? Here goes. Today's book of choice is...


Middle School, the Worst Years of My Life


Rate Khatchadorian is like most middle school kids. Life is all about fun....okay not really In fact, for Rafe life is about as far from fun right now as you can get but it's about to get a whole lot more interesting if he has anything to say about it. You see, he and Leonardo the Silent have come up with a full proof plan to make this the best year ever. How?  By setting out to break every rule in the book ....the school rule book that is. Better still, the more elements of daring incorporated into the actual act, the higher the point value of the deed.  That's right...there's a point system and Rafe is aiming for the ultimate high score.  But will his actions net him the her of his dreams or will he end up with more trouble on his hands than he could have imagined? After all, rules were created for a reason....


Let's see. Where to begin. I came across this ARC as it arrived at the bookstore and I must say it pass actually passed on by my super at the time. You see, the cover was unique and vaguely reminiscent of the "Wimpy" series...in short, not their style. Me on the other hand though I've not cultivated an interest in the aforementioned series was greatly intrigued. I mean how could you not be? The cover (of which I've included my ARC one here) addresses the rules for pre-publishing via some nifty hand drawn people one can only assume will be in the book....and that assumption would be most accurate too.

Then you have the fact that the author was kept a mystery. That's right...you were reading blindly so to speak. Interesting concept and I could totally see why it worked in their favor because I've seen first hand the surprise on people's faces when they discover the new Grisham book they came to buy is on fact a Kids Fiction title. For some reason authors (and readers for that matter) get boxed in, making it seem as though the only type of book they can write is adult fiction or crime but if they have the desire, the story within them to share that just so happens to be outside their first 'field of expertise' why shouldn't they be allowed to pursue that dream as well and have it read by readers with an open mind? We'd want the same chance, wouldn't we? Anywho, let's move back to the story.

As the title suggests, it's about life in middle school and the trials and tribulations that go along with that impressionable age but that's only scratching the surface. Along the way we discover so much more about Rafe and Leonardo (not to mention the bully, his teachers and home life), the special relationship they have and how for better or worse they are always there for each other. The reasons behind his acting out are revealed in due time and trust me, you won't see this revelation coming. Oh and lest I forget, along with the touching aspect of the story with also step a bit toward the serious with Rafe's home life though I must say the way things are handled provides a great example for young readers.

As for the pictures....oh wait, I'm sorry. Did you not think there would be pictures? Think again. As it seems, rafe is an artist and gracing the pages throughout the story are his artistic interpretations of events as they unfold. It adds even more depth to the story and a rather fun edge too. Would it be good without them? No doubt...but their inclusion gives it that little sonething extra.


In short, a book of surprising depth presented with kid appeal from an author breaking the mold on their presumed genre box. This story has style, attitude, but most of all heart. Recommended read for the middle schooler in your house or anyone wishing to see those years through a new creative set of eyes. It has equal appeal to boys and girls, and may even snag the attention of those more reluctant readers. 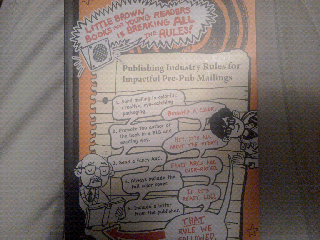 It's so difficult to associate James Patterson with middle grade books :D I am glad to know that this book turned out to have more depth to it. Perhaps I will recommend it to my younger cousins.

I have a bit of a love/hate relationship with JP, I wonder if i will fare any better with this?