The Healing Crystal: Heir to Power by Michele Poague 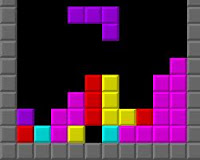 It's me again.  Betcha didn't think you'd get TWO bookishly good posts today now did ya?  Admit it.  You were skeptical....can't say I blame you though what with my recent schedule (I was skeptical too!).  ﻿This week it's back to back work and very little time to squeeze in the reading...but squeeze I shall!  All those years of playing Tetris as a child pay off in the puzzle department, even where time is concerned.  (If you have to ask what Tetris is...O_O...please don't; just Google it...it's not nice to make the blogger girl feel older than she is.)
Today's review features a title that I literally just finished....as in this morning.  Yep.  I was going to finish last night but it turned into the wee hours of the morning and yeah....I needed to grab just a smidge of sleep.  Once my eyes opened again, I was back to the book.  It's not a light read in any sense of the word but it IS a good one to say the least.  Allow me to introduce the book of choice for today..... 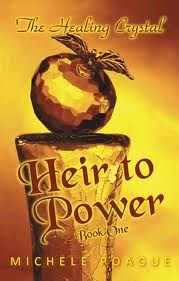 The Healing Crystal:
Book One, Heir to Power
by
Michele Poague
From the website....

The colony of Survin has been hidden for centuries, protecting an ancient religious artifact called the Healing Crystal from men who would steal or destroy it. Kairma, heir to the Crystal, is destined to mate with the handsome Naturi and become the leader of the reclusive colony, but she is too young to realize the peril soon to arrive. At sixteen, Kairma is too young to realize many things ....
Kairma would rather go spelunking with her brother and his best friend than study ancient medicine and religious laws, but the discovery of a tomb containing ancient artifacts leads Kairma to question her religion and the true nature of the Crystal. To further complicate Kairma's ascent, a childhood illness has left her resembling a nearby race of men both hated and feared by the people of Survin. Because of this, Kairma's younger sister Kinter, who is in love with Naturi, believes she is the rightful heir.

Disease and infertility have decimated Survin, but bigotry and religious laws forbid the introduction of new members so things heat up when a traveling archeologist stumbles upon the reclusive colony and introduces a powerful new weapon. Forced into a larger world, the Survinees discover they hold an object of unimaginable power, a power other men covet, a power that might save or forever damn the human race.

Sounds exciting, right?  Now grant it, it takes a certain level of interest in stories that delve into the past and feature native societies in all their rich color....which despite my lack of enthusiasm for the 'Historical Fiction' genre, I have in abundance.  For me, it's not the accuracy of such stories that holds my interest (I don't want to measure everything against a timeline to see if events were researched down to the second), it's the story itself.  The mystical nature of such cultures in both how they lived and what they believed.  From the everyday comings and goings to the hard won battles against (or for) progress, it's the whole package in a story like this that had to pull you in or you may never find your footing...especially with a lengthy novel such as this.

As we've previously discussed, the first book in a trilogy or series is notorious for introducing us to the characters and general story, but not usually tackling anything rich and meaty.  In this case however, we get many an introduction but also quite a bit of forward motion in the storyline.  We glimpse the Healing family as well as the whole of the Survinee village in both childhood and present times.  We come to understand ,at least to the level that they understand, the teachings of their people and the value of the crystal beyond that of riches.  We see the struggles they face both now and ahead, especially with the interference provided by a recent influx of strangers.  Tie all of this together with an unexpected find within their temples, technology they certainly don't understand and a desire to keep the peace that when put to the test could withstand the blows of a thousand swords, this is one novel that doesn't suffer from the "book one syndrome".
Survin is an idyllic setting for a story such as this.  It's removed from the world as we know it allowing it to flourish and thrive for many many annums (years) without the forward motion of progress.  Some would say they should be pitied for being left behind, but for these people it's just another day, not another dollar.  Who wouldn't like to be stripped of all the worry that money troubles cause?  Grant it, I wouldn't be creating this post right now and my beloved books would be a thing of the past (or rather future?) but the ability to truly enjoy each and every day without that stress would be amazing...though don't get me wrong, they do have their own worries and at such a young age for some.  Hmm...perhaps no society is truly perfect, but at the very least this one is pure in their intentions even if those that surround them are not always that way.

Character wise, we've a wide range even in this small culture.  Kairma is a delight to see as next in line for the position of Miral.  She's uncertain, a bit rough and tumble, different in many senses of the word....in short, not whom you'd expect for such a set group of people, which is exactly why I love the position she's in.  It gives readers a chance to see that destiny does not always knock on the door of the most popular (hardly), the most beautiful (though she certainly is, just not in the most accepted way), or the most cunning (yeah, I think her younger sister Kinter got that gene...unintentionally);  sometimes it simply chooses us for who we are and let's the rest take care of itself.  Her sister Kinter is one of those characters you want to throttle at times for their infantile behaviour while her brother Zedic is the epitomy of all a brother should be.  Her mother Jettena is carrying more emotionally than first meets the eye (which comes out later in the story) while her grandmother, Miral Isontra steals the show in her quiet yet commanding ways.
Next we have the villagers with their many talents...and opinions.  What?  You didn't think everything the Healing family said was met without any disagreements now did you?  Ha!  Far from it.  Though most are settled rather quickly, opposition does show its war face now and then especially with several of the elders and their stiff ideas of what should and shouldn't be done.  Progress is the natural way of things...to a degree....even in this remote society.  When change is introduced to their long held laws, they are not quick to welcome it; certainly adds for some lively discussions.  Let's not forget about the city folk (from the distantly neighboring plains) and the mysterious White Ones (they live in the surrounding caves, attack passersby once in a while but who or what they are is never fully explained...yet) who round out the extensive cast.  Rest assured there are many waiting to make your acquaintance in this book... 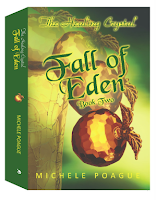 Moving on to two things we didn't see (and I know the author was simply holding out on us here)... first, the explanation of what they uncovered out at the God Stones.  I don't want to spoil it for anyone so I'll keep the details under wraps but it makes me curious about those that left it behind.  Are we talking future civilization or a past ahead of itself?  Only time will tell I'm afraid as the trilogy progresses.  Second on the list of things not seen....Kairma's Seridar.  It's sort of a coming of age party and her formal introduction as Vice Miral (or village healer)....as well as the time when the new Comad will be chosen, who just so happens to be her mating partner (aka husband).  Grant it, that's not the entire point of the story (the love interest portion at least) but it does provide for a rather interesting quandary as it flusters the characters involved, pushing them to sort out their feelings and stake their claim as it were before its too late.  I've got my favorite chosen...*cough*  Collin   *cough* ....but there is at least one other that is definitely in line for this role (Naturi) and he's certainly no "second choice" (as in if he's not off the market thanks to Kairma, there are many girls just waiting for their chance).  Hopefully this mini-cliffhanger will be answered in book two... *fingers crossed*
All in all, an enjoyable read through and through.  You get adventure, a taste of history, a smidge of romance, and danger all in one package making it easy for everyone to find some aspect they'd enjoy.  It's a book about the journey and time passing, not about a quick and tidy ending for a fast entertainment fix.  Best set some time aside when you start this 564 pager...yep, 500+ pages...as the people of Survin will invite you in with open arms so you'll never want to leave...even if you could.
Recommended for teen readers through adults as the intimate scenes are demure and violence is sparse on details.  Review copy received courtesy of publicist BetteRose and author Michele Poague.  (THANKS!)  For more information on this incredible trilogy, feel free to visit the official website, 'like' them on Facebook, follow on Twitter, link on LinkedIn, or seek out her work at one of these bookish sites...GoodReads, Shelfari or LibraryThing.  Book one and two (Fall of Eden) are on sale now with book three (Ransom) scheduled to round out the trilogy in December of this year. 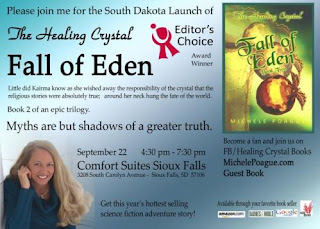 Special note....if you do happen to be in the Sioux Falls, South Dakota area September 22nd, don't miss the launch party for book two scheduled that evening.  For more details, check out the 'News and Events' section of the author's site.
Until next time....happy reading!
Posted by Gina at 11:46 AM

Sounds good, I'll be sure to check this series out.

LOL! Love your comment about Tetris! I had something like that come up the other day and I was dying. I'm not that old, but there are certain things like Tetris that do make me feel it around teens. :oP

This one sounds so complicated! I like the concept, but maybe not exactly for me? But seriously, really really good review! :o)