Good morning (or whatever time it is where you are), everyone!
Welcome to another installment of Taste Testing Tuesdays here at Satisfaction for Insatiable Readers!  Taste Testing Tuesdays was inspired by 'Teaser Tuesdays', a weekly bookish meme, hosted by MizB of Should Be Reading.
On the menu this week, a newly released Kids Fiction title from Walden Pond Press that you simply HAVE TO READ.  Why?  Because I said so....just kidding.  ^_^  No really...if the quirky title doesn't get you, the slew of fairytale familiars will and now you'll see what REALLY happened when "once upon a time" began.  Here's a tasty treat from my current read in progress....
~~~~~~~~~~~~~~~~~~~~~~~~~~~~~~~~ 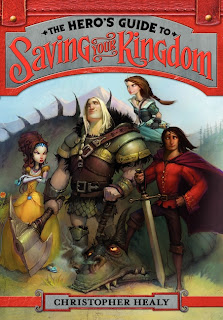 The Hero's Guide to Saving Your Kingdom
by
Christopher Healy
(ARC)

If we were to peek ahead to, say, Chapter 20, we would see our heroes in a small mountain town called Flargstagg, sitting in just about the worst tavern in all of creation:  the Stumpy Boarhound.  The Stumpy Boarhound is the kind of dank and miserable place where pirates and assassins play cards while plotting their next despicable crimes (which often involve robbing the tavern itself).
-- pg 3

Reactions...
...the first...does this mean our heroes are switching sides?
...the second...OMG.  What on Earth are they doing THERE!
This book so far has been a riot!  From discovering the true tales of what really went down to the princess-ly personalities of some princes versus the actual princesses (boy there were a lot of p's in that portion!), it's a smile, gasp, or chuckle a minute.  For more fun on my adventure, check out my GoodReads updates as I continue on my quest with these fellows....or pick up a copy for your own reading pleasure at bookstore near you!

This one sounds so stinkin' fun! Must try to get my hands on it soon...

Oh this does look like a very good YA fantasy read. Very nice! :D Thank you for sharing.

Great cover and I love the name of the tavern, The Stumpy Boarhound, how good is that?

Rebecca: DEFINITELY is. Highly recommend it.

Melissa: Technically kids fiction but works for all ages... ^_^ Ooh, off to check out your teaser now!

Petty Witter: Agreed! ^_^ Just arrived there (in the book) myself!

this sounds really good, and cool cover too!