Hi guys!
Welcome back to Satisfaction for Insatiable Readers…the place that would have you start and end the day with books if it had its way.  Quick reminder before the ball gets rolling, there's a contest going on right now open to one and all for an ebook edition of The Athena Effect by Derrolyn Anderson so once you've finished reading and adding today's featured title to your wish list (trust me, you will), click on the link in the right hand sidebar and WHOOSH...you'll be taken right to the post to get your entries in before its too late!  (Ends 11/11)  Now, back to the ball rolling we were speaking of...

Today, we are exploring…a book entirely different then I originally set out to explore.  How so?  Well you see, I was about to type up a review on a title and my normal process is to gather all the links, pics and quotes I need before and then create the post.  Upon looking for the needed info, I couldn’t locate the book ANYWHERE!  It was strange.  A little more digging and it looks like there may be a title change coming as well as a bump in the release date so back on the “to be reviewed” pile it goes.  Good thing I’m flexible, right?  ^_^  Anywho…

Today, we’re exploring the world as we know it (sort of) in a time so many years in the future (but only just) that takes everything you think you know and turns it on its ear.  It’s a recently published Young Adult title (the first in a trilogy, in case you were wondering) from an author that is leaving her mark in the proverbial timeline and beckoning you to consider things as they are…and how they could be.  Be prepared readers!  This trip is a doozy but once you get a handle on the ins and outs of Spinsters, they’ll be no turning back.  Today’s book of choice is… 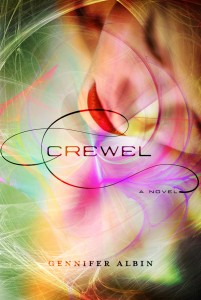 What a tangled world she weaves…
For generations, Spinsters have been called by ’s Manipulation Services to work the looms and determine what people eat, where they live, how many children they have, and even when they die. Gifted with the rare ability to weave time with matter, Adelice is exactly what the Guild is looking for, and in , being chosen as a Spinster is everything a girl could want. It means privilege, eternal beauty, and being something other than a secretary. It also means the power to embroider the very fabric of life. But once you become a Spinster, there is no turning back. Now caught in a web of lies and intrigue, Adelice must decide who to trust: her kind mentor, Enora; the handsome and mysterious valet Jost; or the charismatic Guild ambassador Cormac Patton. They each have secrets, but Adelice is about to unravel the deadliest one of all, a sinister truth that could destroy reality as she knows it.
In a powerful and original debut about a world where the Guild decides everything, one extraordinary girl dares to defy the power of men and the boundaries of love.

It’s a remarkable tale exploring the very fabric of our lives; the reality AND the fantasy.

Adelice is a fantastic lead character.  She’s fire and ice and frankly doesn’t know when to just “stuff it” but that’s okay; it works in her favor and endears her more to us.  Good thing too because this girl is hurting for some friends…even if potential love interests are sprouting up left and right (Hello Jost!  Hello Erik! ^_^)!  Speaking of love interests, it might interest you to know more about the society presented or rather created here.

The story takes place in a world not unlike ours entirely but with some major differences.  The Guild pretty much controls all and the citizens…like it.  *-*  I know, right?  Mind blowing.  I mean I know going all pampered and catered to (well, provided for…their lives aren’t plushy, just balanced) seems to be the dream, but who doesn’t want a choice now and then?  Food and shelter is provided.  Jobs are distributed based on skill and need.  Babies are woven in after approval.  Yes, woven in…as in woven into the fabric of the family in the cloth that represents .  Got that?  Okay, hang on to it because it gets a bit more complicated before things level out…

Back to the lack of choices, girls and boys also live segregated.  I don’t mean separate bedrooms either; I mean different towns, different houses.  The reason?  To maintain purity standards so that the young girls can be prepped, primed and tested for their Spinster abilities.  Now, Spinsters are those women behind the actual upkeep of .  They are able to deftly work with the threads of time, manipulating them on their looms to create rain when needed, new buildings when required, food transfers when supplies are low and any number of other sometimes unpleasant things (including those with sinister intents).  Are they working on their own?  Heavens no!  They live in the , monitored…I mean protected by men (yes, there is an equality issue here despite the roles of “power” women seem to hold) and receive their orders from higher up still.  Yes, theses young ladies are prized for their abilities and rewarded for their contributions with beautiful things, fabulous foods, and the possibility of traveling outside their home cities…but as with all things that seem to good to be true, there’s a catch.

Girls taken can never return home.  They never see their families again.  They never experience the usual joys of growing up, matchmaking sessions, or the usual toil and turmoil life brings.  They will be beautiful for life and prized for their skills but pedestals are uncomfortable places and the only direction to go from their heights of majesty is usually down.  That’s why Adelice was taught how to stay under the Guild’s radar.  That’s why she was told to run when they came for her.  That and the fact that her abilities though doused in doubt are beyond her wildest dreams…some of which she doesn’t even know how to dream yet.  They knew what it would mean for her even if she didn’t…and trust me, the Guild knows too.  How much?  Only time will tell…or will it since Adelice seems to be able to control that too?

The cast of characters surrounding our leading lady are just as fascinating as the world they live in.  From Maela her cunning and cruel instructor who fancies herself in a greater position of power than she currently occupies to Cormac the gent (term used VERY loosely) in charge of almost all that enjoys the company of far too many Spinsters and a good power trip every other second.  From Pyrana who seemed to be a possible friend in an otherwise cold new world (Ha!  Think again….thanks to Maela…) to Valerie who shares a bit much with Adelice considering she’s there simply to help her dress and impress, but never steers her wrong.  Later on we meet Loricel who is definitely one to make note of not simply for her abilities but also for her candor as well as Enora whom one can’t help but appreciate for her kindness and motherly ways.  Then we have the potential love interests…

Erik is Maela’s right hand man (no comment), suave and debonair with blue eyes that could sweep any girl off her feet let alone one that hasn’t been exposed to the male species in all her youth.  But can she trust him?  Better yet, SHOULD she.  In the opposite corner, we have Jost…equally stunning but in a more ruff and tumble sort of way.  He’d be the “bad boy” option if there was one.  He’s part of “the help” as is Erik, just lower on the totem pole…meaning he picks up the scraps and keeps the place running but underneath all of that beats a heart true and strong…that just might include a place for Adelice.  Again with the trust question though because if there’s one thing rampant in the it’s secrets and boy do these two have them in spades!  You’ll root for them both at various times throughout the story, but I think my allegiance would be to…Jost.  Or Erik.  Or…can I plead the fifth til the next installment?  *-*

So, where does all of this leave us?  With a stunning addition to the Young Adult lit scene that is sure to have people talking, that’s where.  I love the fact that although the world seems perfect, flaws exist; people fight the system, moments can be made somewhat off the grid.  I love that the characters feel so real that when the remapping occurs, you too mourn the loss of a confidante.  I love that although Adelice had her eyes open to the wrongness of what was happening around her, she didn’t let it stifle her into silence.  The concepts are big but at the heart of it all it boils down to what’s right and what’s wrong; to control others or be in control of ones self; THAT is the real question.  You can’t keep people in the dark forever no matter how treacherous your threats become.  Truth has a way of being exposed and Adelice is just the girl to do it…for better or worse.

Recommended read for teen readers and beyond!  There’s a beautiful world between these pages just waiting to be discovered, all you have to do is reach out and touch it.  Curious for more?  If you can't run out to your local bookstore just yet, ebooks aren't our thing or you simply are in a state of "need-to-know-more" before picking up your own copy, check out this FIVE CHAPTER sampler from MacMillan...or the Modified collection sampler or even the Fierce Reads sampler.  Too cool...and much appreciated, right?  To explore more of the Crewel world, be sure to visit the website and stop by the official Facebook page.

ARC for review courtesy of Ksenia at Macmillan Children'sPublishing Group.  (THANKS!!)  For more information on this title as well as their complete catalog of wonders, be sure to visit their official website, the teen section, like them on Facebook, pin them on Pinterest, or follow along on Twitter.  To connect with author Gennifer Albin, check out her site, read her blog, like her on Facebook, or follow along on Twitter.  This book is the first in a trilogy (woo-hoo!) released just last month from Farrar, Straus and Giroux and should be available now on a bookstore shelf near you.

Wonderful review! I have this one in my TBR pile, which unfortunately is in storage right now. :(

But your review was awesome and I'm so excited to read it now! Can't wait!

I love the cover of this book and your review did have me putting a star next to it on my list. It sound so intriguing. I can't wait to read this one!
~Jess

Glad to be back. A great review, Adelice does indeed like a good strong character.

DMS: Yay! *high five* Agreed on the cover...and it illustrates something very important in the book! ^_^

Petty Witter: Great to see you back on your feet! ^_^ Yes, she's a great character, can't wait to see how she continues to grow.