Dare to be different...

Hi there!
Welcome back to Satisfaction for Insatiable Readers…the place that aims to satisfy the reader in you but if you walk away having learned something new, that’s the icing on the cake.

Today, we’re exploring a children’s storybook based on the life of an individual so infamous I can’t imagine anyone not having some notion of who he is, that reminds us that the greatest ideas can have the humblest of beginnings…and you don’t have to be BIG to THINK BIG.  Ready to view the world at the speed of light…or how about examine it through the eyes of someone that did?  Today’s book of choice is…

When he was born, Albert was a peculiar, fat baby with an unusually big and misshaped head. When he was older, he hit his sister, bothered his teachers, and didn’t have many friends. But in the midst of all of this, Albert was fascinated with solving puzzles and fixing scientific problems. The ideas Albert Einstein came up with during his childhood as an odd boy out were destined to change the way we know and understand the world around us . . .

Now see there’s a reason I chose today to share this story, aside from it being an interesting read that definitely falls under the category of edutainment.  Today marks the anniversary of the Einstein refrigerator being patented some 82 years ago.  That’s right!  According to the patent records (which I discovered online thanks to your friend and mine, Google), Einstein and a former student by the name of Leó Szilárd co-invented an absorption refrigerator with no moving parts that used heat as the only input.  Pretty cool, right?  Okay, so I only got about half of that but its still pretty nifty.  Anywho…so why do you have a Frigidaire instead of an Einstein in your kitchen?  As it turns out, companies were just as interested in protecting their technology back then as they are now and most of their promising patents were purchased by the competition…including this one.  Cie la vie!  It didn’t stop his mind from churning in the least…

We remember to think at least SIX impossible things before breakfast thanks to a Mad Hatter and a girl named , but Einstein was doing that and more so many years ahead of the curve.  His humble beginnings as a small often angry and misunderstood boy with a large head on his shoulders helped mold him into the thinker we know today.  The solitude he reveled in while remaining within arms reach of his family allowed his mind time to ponder the bigger things in life…even if they caused a bit of friction in his youth.  How so?  Well, in school they sorta prefer you to follow the curriculum set before you and while math was his first love and music a close second, reading, writing, and the rest fell by the wayside. Needless to say the sole focus placed on his areas of interest proofed foolhardy when the opportunity for higher learner presented itself, but Einstein was not to be deterred.  He saw the problem, buckled down and found the solution…long hours of studying!  It may not be the most fun a boy could have but it helped him reach his goal so I’d say that trumps “fun” any day of the week wouldn’t you?

In the end, I’d like to say his hard work paid off…I’d like to say that but I can’t for the fruits of his labor would not be reaped until many years had passed.  That time though did nothing to diminish his mind for everywhere he went, every step he took whether this way or that, the wheels were turning until one day they bloomed into something so incredible that we still see the benefits of his discovery today.  Where you might ask outside of a physics classroom?  Think television, automatic door openers and space travel.  Yep, they all grew from one small idea about a very BIG theory. 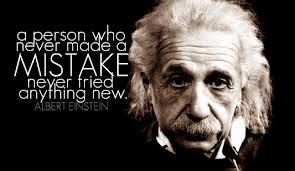 So you see fair readers, it’s not how BIG or small you are or where you get your start; it’s how BIG you think, how far you dream and the how much heart is in those steps you take to reach them.  After all, Einstein could have simply been a snarly little boy that liked math and music but despised sports and Latin…and yet, he wasn’t.  He grew and changed, honing his skills to become one of the greatest minds we’ve known…how’s that for just desserts to those that said he’d never amount to anything.

Recommended read for all ages as the story is both educational, inspirational, and entertaining all wrapped up in illustrations that highlight the mundane nature of the times as well as the explosiveness of one small idea.  Review copy from my own personal library…yes, I do read books from my own shelves from time to time.  ^_^  This book was released in paperback some time ago by the great folks at Houghton Mifflin Harcourt (site, like, tweet!); seek it out on a bookstore shelf or online retailer near you.

I need to get this one!

What an amazing sounding book. As well as great for home reading this sounds like a great resource for any school library.