BLOG TOUR: Working It Out by Rachel Anderson

Hi guys!
Welcome back to the site that shares your pain...you know, the one that will only go away when you can fill your day with nothing but pages and pages of reading....Satisfaction for Insatiable Readers.  ^_^

Today, we're playing host to a stop along the I Am a Reader, Not a Writer blog tour featuring an title that Women's Fiction fans will be clamoring for.  With a male lead totally crush worthy despite the chaos he brings to most situations, and a female lead that is both beauty and brains, it's a smile a minute and full of weak-in-the-knees moments that will keep you glued to the page.  But I digress, I've said too much and you've yet to officially meet book cover to face!  Today's book of choice and blog tour guest is... 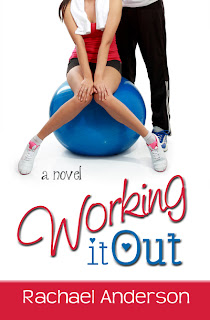 Working It Out
by
Rachael Anderson


A chance encounter . . .
Grace Warren’s life is safe and predictable—exactly the way she likes it. But when she gets roped into going to an auction to help out a friend, everything changes. She meets Seth Tuttle—a guy who unexpectedly kisses her then disappears, leaving her flustered and upset. If she never sees him again, it will be too soon.

A chance for love . . .
Weeks later, when Seth limps into Grace’s rehab clinic post surgery, she immediately recognizes him. Unfortunately, he’s every bit as frustrating and annoying as she remembered. Yet there’s something about him that makes her second-guess her carefully placed boundaries even though he’s everything she’s sure she doesn’t want in a man. But maybe Seth is exactly what Grace has needed all along—assuming she’s willing to risk safe and predictable for a chance at love.

It's a case of boy meets girl.  Boy frustrates girl.  Girl meets boy again but doesn't recognize girl.  Boy realizes error, over corrects with several bouts of foot-in-mouth syndrome, yet eventually things seem to align themselves to where it just might have a shot at working out...if they are ever on the same page at the same time.  (LOL!)

No seriously, it's a riot that's full of heart, tenderness, and a little revenge (not in the harshest way, but in the you've pressed my buttons at the wrong moment and hey, now you're in pain kinda way).  Trust me, it makes it that much sweeter.  Grace is girl that knows where she's going, is her own person, and cares oodles about those that touch her heart.  She's smart, dedicated and....seemingly the polar opposite of her latest patient, one Seth Tuttle, who just so happens to have more than recovery on his mind.  He's the worm in her apple, the fool's gold in her mine, the male lead with a heart of gold that if he could just get past his verbal vomiting, would be just fine.  LOL.  Anywho, though these two are our stars, there are others that leave their mark...including Lanna, who is connected to Seth, and Alec, who is connected to Grace.  Coincidence?  Well, yes and no...but it all works out in the end and they are both equally memorable for the obstacles they overcome and the kindness of their hearts.

From start to finish, it's a tale of what one can do with the life we are given no matter the hurdles placed in our way so long as we learn to make time for work AND play. So if you're a fan of reads with heart, hope, laughter and love potential, this is definitely one to add to your wish list.  Ebook for review courtesy of I Am A Reader, Not A Writer.  (THANKS!)  For more information on this tour as well as those forthcoming, be sure to stop by her official site, like her on Facebook or follow along on Twitter.  To discover more about the mind behind the work, be sure to stop by Rachael Anderson's site, Facebook page, or Twitter feed.  This title is available now in both print and ebook form, so seek thee out a copy on a bookstore shelf or online retailer of choice.


ALSO...don't forget to stop by the official tour page and enter to win a $25 Amazon Gift Card or Paypal cash now through September 10th!

Email ThisBlogThis!Share to TwitterShare to FacebookShare to Pinterest
Labels: 2013, blog tour, book review, Contemporary Romance, I Am a Reader Not a Writer

This does sound like a cute fun ride with these two. A lighthearted fun read. :) Thank you!

Wow, you definitely have a way with words. I loved that review! :) So cute and fun. Thank you! I might even have to make you write my next blurb for me. :)