Hi guys!
Welcome back to Satisfaction for Insatiable Readers...the place where age is just a number; it's the size of your IMAGINATION that really counts.

Yep, just as I suspected.
You measure up rather nicely.
^_^

So, today we are breezing through a recent release and a recent read of mine that fell squarely into the Storybook category but with a little surprise to yours truly.  You see, I often find with books of this nature, I am drawn in by the images but ensnared by the tale...with this one, it took a little more effort on my part.  Don't worry folks, it was good and the surprise aspect really nets out in the end but before the big reveal, let's introduce each other properly.  Book, this is your reading audience.  Readers, this is today's book of choice.... 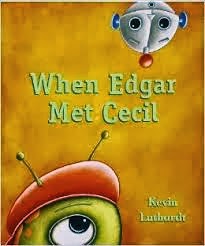 See?  The cover.  How can you NOT be curious as to which one is Edgar, which one is Cecil and why in the world it all matters?!  I know I was...and the simple truth is that it boils down to a lesson (or two) often times hard to learn for most youngsters.

The first lesson is that the most constant thing in life is CHANGE, in this case a move from Edgar's hometown filled with "people" he knew to a place that looks WAY different with WAY different people and a WAY different way of doing things.  (Hmm, I wonder if I broke any records for using "way" THAT many times in a sentence...^_^)  Hey, just because kids tend to adapt easier doesn't mean that it's lickety-split.  There's a transition times for everyone and depending on the person, young or old, it can take its toll...spoken from someone with experience in that department.  Anywho, Edgar perseveres in a lonely way until finally the one person that spooked him most...turns out to be the best things to happen to him since sliced bread, or in his case, WD40.  (Robot humor...oh come on, I HAD to make one!)  Which brings us to the second lesson...

Don't judge a book by its cover.  It sounds simple.  It sounds like something that applies to inanimate objects only but take it as you do most sayings of old, with a grain of salt and an open mind/ear.  In Edgar's case, it means just because someone or something looks new, scary, out of sorts, and out of this world (in a not-so-good-way), doesn't mean that it's actually the case.  Sometimes the best surprises in life happen to us when we let our heart instead of simply our eyes lead the way.  For Edgar, it chances an uncomfortable situation seemingly out of his hands into something fun, magical and wholly unexpected.

So you see, this isn't simply a story about a robot meeting a monster and the dire or less-than-dire outcome of said one on one but a tale of change, a story of giving people and places a chance, and a lesson of allowing others to see our true selves and inviting them to do the same.  Back to that surprise I mentioned earlier...it's not like a "BOO" surprise but more of a "hey-that-would-be-fabulous-to-put-on-the=BOOKS-FOR-BOYS-list" type of surprise.  While it works for all ages and gals as well, there can sometimes be a distinct shortage of books that work REALLY well for little lads, whether it be the characters sex, the "fu-fu"-ness of the story, or a myriad of other things.  This one stars two little fellows, takes us for a walk on the playground from a young boy's point of view, and finally lands us in the arms of friendship with a fist bump of welcome.  Like I said, add it to the list. 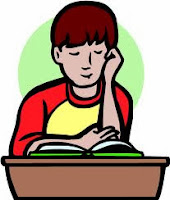 Review copy received courtesy of Peachtree Publishers.  (THANKS!)  For more information on this title as well as their complete catalog, be sure to stop by their site, or follow along on Twitter.  There are MANY other options to connect with them socially, but I'll let you explore those on your own.  (It's more fun that way ^_^.)  This title is newly available this month so be on the look out for it on a bookstore shelf near you.

I so agree with you about the shortage of books for boys.