A Space Opera Begins... The Silver Ships by S.H. Jucha

Today, we're embarking on a reading mission to the outer most parts of the known universe...and beyond.  Yes my friends, we're exploring the recesses of space, planets unknown, beings both foreign AND familiar, courtesy of a new-to-me series that I'm about to entice YOU into.  That's right.  My mission is clear...expose the wonder within so as to bring the masses to the media ready for your consumption.  I've accepted it...now will you?  Today's book of choice is... 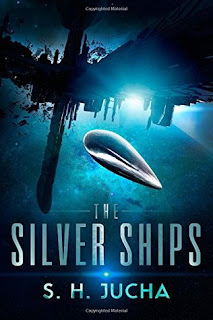 About the book...
An explorer-tug captain, Alex Racine spends years in space, harvesting ice asteroids for New Terran's water-hungry outposts. His existence is both routine and solitary...until his ship's computer detects a damaged alien craft drifting into system. Recognizing a once in a lifetime opportunity to make first contact, Alex pulls off a daring maneuver to latch on to the derelict.When Alex boards the Reveur, he encounters the ship's AI. The entire craft is riddled with holes, damage that could only have come from a fight. While confronting the AI for answers, Alex is shocked to learn that eighteen survivors, trapped in stasis, are on board. Like the New Terrans, the Meridiens are human-both settlements originating from colony ships sent from a dying Earth-but oddly the Meridiens' technology is hundreds of years ahead, which makes their story all the more terrifying.The Reveur was attacked by an unknown craft, the first of its kind ever encountered. The mysterious silver ship made no contact before firing its beam weapon, and its attack was both instant and deadly.Intrigued by the Meridiens' story, and even more so by their leader, the exotic Renee de Guirnon, Alex decides to help them repair their ship and return home...but not without the means to protect themselves. For, he was haunted by one thought: where there was one, there might be many 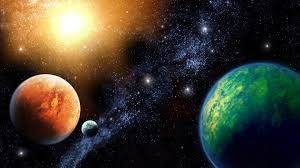 For those that are frequent readers here, you already know that space is not usually my chosen frontier.  I prefer keeping my feet on the ground and letting my imagination take the flights of fancy...but that is the beauty of having a blog like my own.  I purposely chose to NOT pigeon hole myself, that is to not stick to a particular genre.  Does it win me extra readers?  Not always...sometimes people prefer the consistency, the familiarity that comes with "knowing" what they are clicking into, but I prefer to keep you and I both on our toes.  The way I see it, you never really know where your next favorite read will come from and by allowing my site to focus on things that capture my attention no matter the genre, I'm open to experience THAT many more opportunities in the reading world...as are YOU.  So, if you stop over one day and find a Picture Book, be prepared...the next day may bring Horror, Christian Fiction, or a particularly tantalizing Memoir.  You just never know.  Anywho, back to THIS adventure...

Though I've never read the books, the story unfolded in my mind's eye similar to Alien (the movie series)...and I can't say that I was disappointed! I really loved Alex Racine, our initial pilot to Captain turned Admiral.  He was a charming abrasion to the beauty and finesse of the Meridien's. In short, he was very HUMAN, recognizable to ourselves in many ways, thus enabling the reader to have an instant connection to what will turn out to be a fascinating character.  The way his mind works, how he carries himself, the way he cares about EVERYONE involved.  For a person who chose to be in the company of one most of his life, he sure isn't lacking in social graces.  Renee didn't know what hit her when he appeared on the scene, and yet they had much to learn from each other, equally opening the other's eyes to new ways of considering things.  Speaking of which, the question of humanity in regards to Julien and the other SADEs (self aware digital entity) as well as their treatment was a big focal point.  How does one converse with a shipboard computer that is in control of so much yet seems so human?  It's a conundrum that plagues all...all except Alex that is, to which more respect is owed because of it.

Story wise, we're traversing the galaxy to investigate an anomaly and in the end trying to save a race of people that doesn't even know their own bloodline's fate.  The events that transpired putting their ship in the state it was found (think Swiss cheese but trying to sustain life still) did not occur just yesterday but many MANY years back which leads us to question...what happened to those back home?  There are several options, but many of them are less than acceptable, which only fuels the fire for them to find a way to get back home.  With the help of their New Terran champion, that just might be a possibility...though with what outcome is anyone's guess.

In the end, my first mission to New Terran and Meridien is complete with much success. I'm loving the world created as well as the cultures and technology aspects, but the connections are what really have me. It's a new world for all of them and their progress and desire to grow together is applause worthy. Definitely looking forward to more with Admiral Alex and Renee in the next installment, and here's hoping the future remains bright! 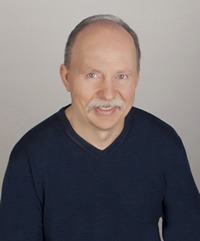 Special thanks to Mallory at Smith Publicity Inc for the copies for review.  (THANKS!)  For more information on this series, this title, the author, or those promotions on the horizon, feel free to click through the links provided above.  This title is available now in tree and ebook formats, so be on the lookout for it on a bookstore shelf or virtual retailer of your choosing.  Be sure to tune in all week as we explore the rest of this three some as it draws towards what I'm hoping will be a stunning conclusion....for now (it's slated to be a FIVE book series with a possible spin off!).