Today, we're joining a blog tour already in progress via MacMillan Children's Publishing Group starring the second installment of a fascinating Young Adult trilogy you've got to read to believe.  Trust me, you're in for quite a few twists, turns, and surprises that will knock you for a loop, but before we get too far into things, I must warn you....this is NOT a standalone title, nor should it be read as one.  I know a lot of series, trilogies, sets, etc can be read this way and I'm not one to normally tell you what to do but believe me, you want to read the first one because it IS fabulous, but you NEED to read the first one in order for what transpires here to make a shred of sense.  If you need a refresher, here's a link to my review of the first one; if not and you're raring to go, far be it from me to hold you back.  In fact, allow me to introduce without further delay, today's blog tour guest and book of choice... 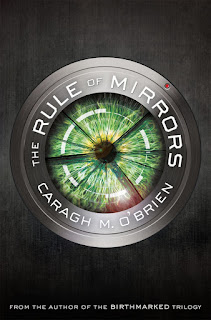 About the book....
The fast-paced, psychologically thrilling sequel to The Vault of Dreamers follows Rosie after her consciousness has been split in two.

The entire country was watching when Rosie Sinclair was expelled from Forge, the prestigious arts school that doubles as a reality TV show. But few know how Dean Berg was mining students' dreams in laboratories deep below the school. And no one, least of all the Dean himself, knows that when Rosie's dreams were seeded into the mind of another patient, Rosie's consciousness woke up in that body--a girl far from Forge, a girl with a completely different life from Rosie, a girl who is pregnant.

Told from alternating points of view between Rosie as she makes sense of her new identity and the shattered subconscious that still exists in her old body, The Rule of Mirrors will keep readers on the edge of their seats and leave them hungry for more.

OMG.
Where do I even begin?!

First of all, let me reiterate, THIS IS NOT A STANDALONE.  DO NOT READ IT AS SUCH!  No, I'm no being compensated to say that in order to sell more copies of the first book.  I'm simply a fellow reader that has already swam the murky waters within this book and know that had I not had the backstory from the first book, I would have been BEYOND lost.  Does that take away from this book and it's magnificence?  No!  It just means this is a trilogy (well, it will be anyway) that was meant to be read in its entirety and in order or release.  Case closed.  Nuff said.  Moving on...oh, and there may be a spoiler or two if you keep reading without having read book one, so like I said, read it!  (^-^)

Secondly, Rosie is back and better than ever...BOTH of them!
Confused?  Yeah...it's a curious concept to grasp and without the one-on-one semi-demanded interview with a VERY unexpected character, a theory I may not have been able to fully understand on my own seeing as I don't generally swim in the science fiction style dramas.  The dream mining that took place in book one?  Yeah, we see a good portion of what they were REALLY up to here and also discover the fate of Rosie, one half at a time. That's right.  The scary scene at the end of the first leads us right into what happens when one's conscious splits and each part fights for self-preservation.  So now we have two Rosie's or rather a Rosie that looks like Rosie and a Thea who THINKS like her but isn't, yet is.  Try to stay with me because it is SO worth it, especially when the bodily Rosie escapes her imprisonment from the oh-so-evil-you-want-to-hurt-him Berg.  *grr* Things get really hairy along the way for BOTH girls, so much so that there's not only an escape but kidnapping, attempted murder, stalking, drugging, sneaky surveillance, and a disappearance along the way.  That's not including all the feels cropping up for both Rosie's in regards to personal connections, re-connections, and utter hatred.  Yes, lots of feelings to work through and an ending that will leave you gasping for breath.

All in all, it's definitely not a series suffering from a sophomore slump and it certainly serves as more than a bridge to carry us over to the third and final installment.  We get to reacquaint ourselves with characters we thought to be lost, figure out who among those newbies introduced can really be trusted, and see just how it might be to be of two minds in a literal sense.  I mean I've always heard it's okay to talk to yourself but if you start answering, then you've got  trouble.  I wonder how that holds up if the one doing the answering is OUTSIDE of you and in a different voice?  *-*

Recommended read for Young Adult fans in their teens and beyond.  It's one exciting read with fascinating scientific aspects explored AND questioned that'll leave you breathless...and ready for the final book in the trilogy.  I know I'll be counting the days.

Caragh M. O'Brien earned an MA in the writing seminars at Johns Hopkins University. Her novels Birthmarked and Prized were named YALSA Best Fiction for Young Adults. She lives with her family in Connecticut.

Special thanks to Mary at MacMillan Children's Publishing Group for the ARC for review and chance to bring this tour to you.  (THANKS!)  For more information on this title, the trilogy, the author, or the publisher, feel free to click through the links provided above.  This title celebrated its book birthday 02/16/16, so be on the lookout for it on a bookstore shelf or virtual retailer of your choosing, and for more exciting reads like this, be sure to check out FIERCE READS.  Seeing as this is a blog tour, please be sure to visit the other sites participating for other points of view, shares, and more!  Just click through the links below... 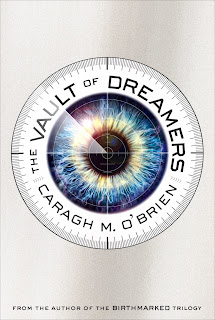 Open to US residents only; no P.O. Boxes please.
Entries accepted now through March 5th, 2016.  Winner will be drawn and contacted with 48 hours to respond with their full mailing information for prize send out.  If a response is not received in the given time frame, a new winner will be chosen.  SFIR is not responsible for lost or undelivered prizes, though if you let me know, I'll gladly contact the sponsor to follow up!  Good luck!

The cover grabbed my attention immediately. It's been getting exciting reviews and the synopsis makes me want to read this series.

Thanks for this great feature and your excellent review which captured my interest.

I loved the Birthmarked series so I would love to read this one too!

The cover and the premise really make me want to read this book.