Today, we're joining Penguin Young Readers for a stop along their current tour featuring a NEW RELEASE to the world of Middle Grade Fiction books that is sure to raise a few eyebrows...or at least make them bushier.  If you've ever harbored thoughts about traveling through wooded forests at night alone, think again.  If you've ever wondered fiercely what that strange barking sound was rising up over the eastern horizon just after midnight strikes, best not to investigate.  If you've ever sought a place you truly belonged, a place and/or people to call your own...NEVER STOP LOOKING...and join me for a curiously strange and unusual story that will have older readers bark-ening back to literary classics, while the kiddos are being newly introduced, even if they don't EXACTLY know it.  Ready, set, here comes today's blog tour guest and book of choice... 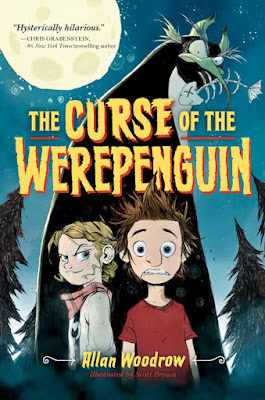 About the book...
All orphan Bolt Wattle has ever wanted was to find his true family. When a mysterious baron in far-off Brugaria sends for Bolt, he wonders if he's getting closer to finding his long-lost parents. But Baron Chordata appears to be a twelve-year-old boy who wears tuxedos all the time, shouts at everyone, and forbids Bolt from asking questions. Things couldn't get any worse . . . until midnight, when the Baron bites Bolt and turns him into a half boy, half penguin. Then things really couldn't get worse-- nope, wait, they get a lot worse. With the help and hindrance of a plucky girl who just might be the world's greatest bandit, a whale cult led by a man whose weapon is a stale loaf of French bread, and a sinister but friendly fortune-teller who can't stop cackling, Bolt's on a quest to reverse the curse, return to human form, and stop the Baron from taking over the country of Brugaria with his army of mind-controlled penguins in what might be the weirdest--and funniest--middle-grade novel you've ever read.


Ironically as I'm typing this, I just let out a pair of abnormally large SNEEZES, and while that simply sounds like oversharing to the average reader, for those that have already partaken of the adventure we are exploring, it might actually be displaying an unknown ALLERGY.  (inside joke...read the book!)  Anywho...

Have you ever wondered what would happen if Frankenstein and Young Frankenstein met Dracula, decided to introduce themselves to the Wolfman, while perhaps becoming blood brothers with the cast of Princess Bride?  Ah, I see...well, neither did I, but that's a curious yet accurate summation of what you'll be getting between the pages of this Middle Grade Paranormal adventure, along with a great big helping of just how important FAMILY truly is...and fish.  Lots and lots of fish.  No really, FISH in SO MANY WAYS, cooked and non, catapulted and served, seasoned and chocolate covered...*shivers*.

Our unsuspecting leading man and potential hero, Humboldt Wattle (better known as Bolt), is quite the character indeed.  Despite his less than exceptional start in life, he keeps hope alive, and his stuffed penguin at his side.  He dreams of one day finding his true family, and even when things seem at their darkest, all hope fleeing like so many schools of fish before a whale, somewhere deep inside his changing body...a seed of that precious hope remains.  He keeps his heart pure, gives him strength to fight, and eventually leads him to...his ultimate purpose.  No, I shan't be ruining the surprise for you, but trust me...it's good.  Our second leading lad, Baron Chordata (*faraway SCREAM....THUD*), is a remarkable fella as well, but in much darker, cringe worthy ways with his darker goals, sinister threats, and easily tapped anger issues.  I mean, he's been alone (sort of) for a bit (*snort*...understatement!), so you can sort of understand how he might have turned from the lighter side of things, but yeah...not to this particular level.  Let's just say that if anyone offers to be BFFs and you're distracted by some personal version of nirvana...take a break from the distraction to LISTEN to what's actually being said/agreed to!  Our third leading guy is actually NOT a guy, but a GIRL...and the best bandit the Brugaria Forests have ever seen...or at least will be when her name is known a bit more.  It's Annika, and her history is just as twisted and sorted/assorted as the fellas mentioned before her...and yet she excels where she wishes to excel, conquers what needs conquering, and never let's anyone tell her what she can't do JUST because she's a girl.  (Woot woot!)  Grant it, she gets into trouble as easily as out of it, but that's all a part of learning, right?  Right!  Now that I've made this paragraph RIDICULOUSLY long, let me just say that while they are the leads per se, there are SO MANY MORE that you'll want to PAY ATTENTION to along the way because you NEVER KNOW where connections are going to come from.

So, to conclude before I write my own story at this point, while you thought you were simply getting an exciting new paranormal adventure fit for middle grade readers and beyond, NOW you know better!  You're getting that plus a whole other barrel of fish that'll have you REALLY thinking the next time you consider the penguins at your local zoo habitat and just what they have been up to lately...


Allan Woodrow is the author of many books including The Pet War, Class Dismissed, Unschooled, Field Tripped, and now, inspired by Dracula, old werewolf movies, Young Frankenstein, and an odd affection for fish sticks, The Curse of the Werepenguin. When Allan isn't writing, or noshing on breading-coated seafood, he's often presenting to schools, libraries, and conferences. You can learn more about Allan at allanwoodrow.com

Oh and since I never know when enough is enough, time to give you a little more!  The author was kind enough to share TEN (plus five) MAYBE TRUE FACTS all about our tuxedo-ed little friends...

In anticipation of The Curse of the Werepenguin, here are the top 15 maybe true penguin facts…

Special thanks to Friya at Penguin Young Readers for the ARC for review as well as the chance to bring this tour to you. (THANKS!) For more information on this title, the author, or the publisher, feel free to click through the links provided above. This title hit bookstore and virtual shelves August 13th, 2019, click on over to order your copy today! Be sure to check out the rest of the stops as this tour makes its way through the blogosphere for more bookish insights and fun...

Oh yes, definitely one for my penguin obsessed friend ... her son might enjoy it as well :-)

Great title, wonderful cover and what sounds like a fun read. Intrigued by your nod towards that inside joke (Hmm! I wonder), thanks for a great review and some interesting facts.