Today, we're joining Rachel's Random Resources for a stop along their current tour featuring the first book of The Muse Chronicles.  It's a Paranormal Romance that's a bit of mythology, a dash of romance, and a whole lot of danger!  Ready or not, here comes today's title in the spotlight... 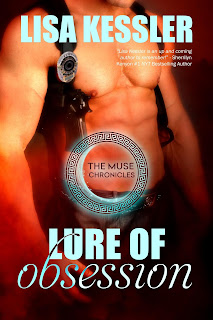 Lure of Obsession
The Muse Chronicles, Book 1
by
Lisa Kessler

About the book...
The Prophecy - "Every generation the nine daughters of Zeus are reborn, and with their rebirth are also nine Guardians. They will be marked by the gods, and given gifts to protect his treasure. Their abilities will only be unlocked when they find their muse."

Melanie Jacoby is the human vessel for the Muse of Tragic Poetry, but she isn't prepared for the tragedy of finding her roommate dead at the bottom of the stairs.

Nate Malone is the detective assigned to the case, but as the evidence points to an accidental fall, the visions begin. He sees a killer in a gold Kronos mask.

Mel is the next target, but Nate's determination to protect her is almost as strong as his desire for her.

And tragedy isn't part of his plan.

"Another beautiful series from an unbelievable author. She gets me every time." #1 NYT Bestselling Author Sherrilyn Kenyon

Thanks for having me on the blog! I’m Lisa Kessler and I write paranormal romances with tortured heroes and strong heroines.  This is their first kiss in LURE OF OBSESSION. Since he met his muse, a new ability has awakened inside of him, and suddenly his life just got very complicated!


Nate arrived first and nursed a Coke at the bar. Although his back was to the door, he was aware of her presence the second she opened it. How was that even possible?

She took the stool next to him, resting her hands on the bar. “What’s so important?”

On an impulse, he placed his hand over hers and braced himself. Nothing. Well. Far from nothing. In fact, his entire body sizzled with need. But he had no visions. He hadn’t had any at the hit-and-run earlier, either. Maybe the visions had been a one-time thing. Or a brain tumor.

“Sorry.” He pulled his hand away. Thankfully she didn’t seem offended, but confusion lined her brow. He got up and pointed toward a corner table. “Let’s talk somewhere more private.”

He followed her, grateful she didn’t mention his inappropriate physical contact.

Once she was seated, her gaze locked on his, her full lips struggling to hold back a smile. “I hope I didn’t come down here to hold hands.”

He raked his fingers through his short hair. “Sorry about that.” He leaned in closer. “Solving crimes is like following a spiderweb. Everything is connected in some way, it’s just figuring out where things intersect so I can find the spider in the middle.”

He shrugged. “Is there a reason you didn’t mention the Muses were daughters of Zeus?”

Her smile faded. She rested her forearms on the table, leaning closer to him. “You were asking about Kronos, not Zeus.”

“Your theater is for the nine Muses, Zeus’s daughters. If I were a crackpot on Team Kronos, I’d hit Zeus where it hurts—his beautiful girls.” He moved even closer to her, pulled in by some unseen magnetic force, an unquenchable thirst to be near her parching him.

“You might be on to something, Detective Malone.” Her breath warmed his lips as she spoke.

“Nate…” she whispered as she closed the distance between them. Her lips brushed his .

Fireworks erupted behind his eyelids, landscapes rolling through his consciousness in a constant stream he couldn’t comprehend. Greece, Rome, Paris, Crystal City. He pulled back, struggling to clear his head.

She frowned. “See what?”

Maybe he needed to get more than his birthmark checked out. He ran a hand down his face. “Sorry. When I’m around you…”

“Please don’t apologize, you’ll hurt my pride.” She almost smiled. “And I kissed you. Just so you know.”

He was usually smooth when it came to women, but Mel wasn’t like anyone he’d ever met. She threw off his equilibrium, and the crazy visions weren’t helping. He shook his head. “I wasn’t apologizing for the kiss.” He chuckled. “In fact, I’d be willing to try that again sometime.”

Lisa Kessler is a Best Selling author of dark paranormal fiction. She's a two-time San Diego Book Award winner for Best Published Fantasy-Sci-fi-Horror and Best Published Romance. Her books have also won the PRISM award, the Award of Excellence, the National Excellence in Romantic Fiction Award, the Award of Merit from the Holt Medallion, and an International Digital Award for Best Paranormal.

Her short stories have been published in print anthologies and magazines, and her vampire story, Immortal Beloved, was a finalist for a Bram Stoker award.

When she's not writing, Lisa is a professional vocalist, and has performed with San Diego Opera as well as other musical theater companies in San Diego.

Stay up-to-date on new releases and giveaways by subscribing to Lisa's newsletter!

Special thanks to Rachel of Rachel's Random Resources for the chance to bring this tour to you. (THANKS!) For more information on this title, the author, this tour, or those on the horizon, feel free to click through the links provided above.

Whilst the mention of 'bit of mythology' got my attention, alas I don't think this a read for me.