RRR presents... WE ARE ANIMALS by Tim Ewins - SPOTLIGHT + EXCERPT!

Today, we've teamed up with Rachel's Random Resources for a stop along their current promotion featuring a rather curious title that...well...you sort of have to see and read about to believe.  No, really...I'm not quite certain how to describe it exactly, but the curiosity factor is exactly what drove me to share it.  So, without further ado, make way for today's title in the spotlight... 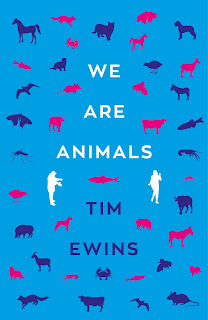 We Are Animals
by
Tim Ewins

About the book...
A cow looks out to sea, dreaming of a life that involves grass.

Jan is also looking out to sea. He’s in Goa, dreaming of the passport-thief who stole his heart (and, indeed, his passport) forty-six years ago. Back then, fate kept bringing them together, but lately it seems to have given up.

Jan has not. In his long search he has accidentally held a whole town at imaginary gunpoint in Soviet Russia, stalked the proprietors of an international illegal lamp-trafficking scam and done his very best to avoid any kind of work involving the packing of fish. Now he thinks if he just waits, if he just does nothing at all, maybe fate will find it easier to reunite them.

His story spans fifty-four years, ten countries, two imperfect criminals (and one rather perfect one), twenty-two different animals and an annoying teenager who just…

But maybe an annoying teenager is exactly what Jan needs to help him find the missing thief?

Featuring a menagerie of creatures, each with its own story to tell, We Are Animals is a quirky, heart-warming tale of lost love, unlikely friendships and the certainty of fate (or lack thereof).

For the first time in her life the cow noticed the sun setting, and it was glorious.

Thank you Gina, for letting me share an extract from We Are Animals with everyone at Satisfaction for Insatiable Readers! I chose the following extract, as it feels like a stand-alone story in itself. At this point in the plot, Jan (the protagonist) fails to see the beauty in the world around him due to romantic and family hardship. Little does he know that the cow down the beach has experienced something very similar…
I hope you enjoy it…

Prisha, the cow, had been born in a field not too far from Palolem. Her childhood had been a happy one, living with her cow-mother in a relatively grassy field. She could see her bull-father two fields along, and although he didn’t pay much attention to her, she loved him. Most days Prisha would eat the yellowing grass in her and her mother’s field and when the sun got too hot, she’d lie down next to the fence parallel to her bull-father’s fence.

Prisha couldn’t remember ever having any physical contact with her father but she watched him from her field every day. She knew everything you could know about a bull just from observing his daily routine, his movements and his expressions. She felt certain that he was a good bull, and if they were able to share a field, he would be a good father.

On one particularly hot day, when Prisha was watching her father sleep, a thin old man attached a large sign around him with two thick black rubber harnesses. Prisha couldn’t read, but if she could, she would have read the words ‘FIT FOR SLAUGHTER’ on her father.

The sign remained on the bull for a week. Prisha watched as the sign rubbed against her father’s back and left sores on his underside. By the third day her father couldn’t walk without discomfort and by the fourth he didn’t try. When the thin man came back to the bull’s field, Prisha’s father was completely motionless.

Prisha knew the thin old man. He gave her and her mother water every few days – water which they needed. Nevertheless, the thin old man had killed her father. The next time he brought water to the field Prisha charged at him. She knocked the thin old man over and ran out of the gate in a panic. Her mother did not follow.

The next few years offered a lonely existence for Prisha. She’d stand by the roadside, eating what little grass could muster the energy to grow in the scorching heat, and she’d try to moo at the occasional motorbike. She normally managed nothing more than a dusty breath.

It was her own holy status that kept Prisha alive. People she’d never seen before would stop and empty their own water supplies for her. She ate all kinds of strange foods on her journey – jelabis, curried goat and lamb samosa. Despite this, grass was not easy to come by and life was hard. Never – not once – did Prisha notice the sunset.

It was seven years before Prisha found Palolem. When she first arrived in 2007 the beach had been surrounded by green fields with palm trees leaning out towards the sea. There were a few beach bars and maybe two dozen foreigners wandering the sands and waters. Although the people, trees and bars did not interest Prisha, the fields were her Mecca.

Every morning Prisha would chew up some lovely fresh grass before being shooed away from the field by one of the farmers. She’d spend her afternoons eating unsatisfying dry sticks and driftwood on the beach.

Over the next few years more foreigners came to the beach. Not many stayed for more than a week, and almost none (bar one particular moustachioed man) stayed for longer than a month. A funny thing happened, though – as the population of foreigners increased, so did the number of beach bars and little shacks for sleeping. At the same time as beach bars and little shacks for sleeping increased, the number of farmers decreased, and as the number of farmers decreased the amount of time Prisha could spend eating their fields increased. It wasn’t long before she was eating her fill every day without being shooed away.

After Prisha had spent a week comfortably filling her now quite skinny body with nutritious grass, she returned to the beach. This time she visited the beach out of habit rather than necessity. She wasn’t hungry, and she felt no need to search for dry driftwood. Looking around her, she finally saw what the tourists were seeing – the beach was very pretty. The people she’d previously ignored were all smiling, and the bars were colourful. This was the first day that Prisha noticed the sunset, and it was glorious. 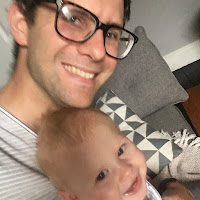 Tim Ewins has enjoyed an eight-year stand-up career alongside his accidental career in finance.

He has previously written for DNA Mumbai, had two short stories highly commended and published in Michael Terence Short Story Anthologies, and enjoyed a very brief acting stint (he’s in the film Bronson, somewhere in the background).

He lives with his wife, son and dog in Bristol. We Are Animals is his first novel. 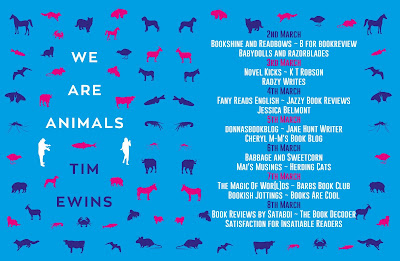