Today, we're joining Chapter by Chapter Blog Tours for a stop along their current promotion featuring a NEW RELEASE via Entangled Teen Crush!  It's a Young Adult Contemporary Romance with all the feels and a bit of familiarity, but we'll get to that in a minute, that just hit virtual shelves March 2nd, 2020.  Curious?  I don't blame you in the least!  Ready or not, let's take a SHOT at this sure BET as we train our eyes on today's blog tour guest and ebook of choice... 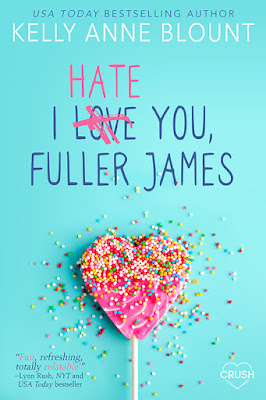 About the book...
I hate you, Fuller James.

I hate your floppy hair and your lopsided grin and those laughing blue eyes that always seem to be laughing at me.

I hate that you’re the most popular guy in school and I’m still the girl who sneezed and spit out her retainer on someone at a middle school dance. It’s just such a cliché.

I hate that I’m being forced to tutor you in English and keep it a secret from everyone. Because otherwise it might put our basketball team’s chances at winning State in jeopardy, and even though I hate you, I love basketball.

I hate that it seems like you’re keeping a secret from me…and that the more time we spend together, the less I feel like I’m on solid ground. Because I’m starting to realize there’s so much more to you than meets the eye. Underneath it all, you’re real.

But what I hate most is that I really don’t hate you at all.

What do you do when the one you loathe becomes the one you love?
Do you throw caution to the wind and embrace the change...
...or do you become super suspicious and question every move, motion, sign of devotion, and turn the whole thing inside out and on its head before it even has a chance?
In either case, I can't say I'd blame you.

Here we have Wren.  Tortured for years by Fuller and his crew, she's done fine for herself.  She has a few close friends, her academics, the cross country team, and a bright future ahead...until one day, a waylaid (or not!) handful of mashed potatoes brings her plans into question.  The only solution to wiping the slate clean...tutor the one person she swore she would never have anything to do with, Fuller James.  Thing is, things don't go exactly as planned, and feelings start to happen on both sides of this unexpected duo...but trusting in them is a tall order, and the faith placed there could seriously be a big mistake.  All is fair in love and war, right?

I ADORED Wren's character for all she was worth, and despite my inclination to fall victim to the title, I actually didn't mind Fuller either.  True, he gets better as the story goes on and that grand gesture is really above and beyond (even if slightly unbelievable), but it didn't really seem like he was such a bad person from the start, just misguided by some batting eyelashes and his high school fame.  When these two were able to see beneath the surface to what really makes them tick, it was a potential match made in heaven...no guarantees, but a definite pair in the making.  Marissa on the other hand (and even Fuller's cronies), I honestly couldn't stand!  She went from friend to foe and then started spreading vicious lies, and non-truths just to ride on the popularity train...but really, what good is being popular if your soul is black?  (Okay, now I'M being dramatic, but you get the point.)

All in all, a fun read that reminded me of all the great teen movies from yesteryear.  It's a lot She's All That with a helping of Can't Hardly Wait and even a dash of Clueless mixed in for good measure, but while the story may have some similarities, it still comes together for a sweetly satisfying read that'll leave you with a smile.  (Also, gotta say that cover is definitely a SWEET choice!) 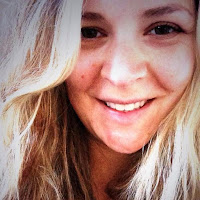 USA Today Bestselling author and Wattpad Star Kelly Anne Blount has more than seventy-three-thousand followers on social media. Her Wattpad stories have been read more than twenty-million times. She’s contributed to Tap, Wattpad’s new app for chat-style stories, where her work has been “tapped” more than fifty-million times. She is a writer and reviewer for SpoilerTV, which has allowed her to develop an incredible network of film and TV stars.

Two of her Wattpad works, including Captured (seventeen-million reads), have been optioned for film by Komixx Entertainment, and she is regularly invited to present seminars about social media at author events.

One (1) winner will win a signed copy of I HATE YOU, FULLER JAMES and a commissioned art postcard!

Special thanks to MaryAnn of Chapter by Chapter Blog Tours for the chance to bring this tour to you as well as to the team at Entangled Teen for the ebook for review.  (THANKS!)  For more information on this title, the author, the publisher, this tour, or those on the horizon, feel free to click through the links provided above.  This title is available now, so click on over to your favorite online retailer to snag you copy today!