Today, we're joining Rachel's Random Resources for a tour already in progress starring a new Historical Fiction title via Harlequin Books. It's from a subgenre in the Romance category that I haven't read, but where there's a fan, there's a story! Ready or not, fair readers, let's get this bookish party started as we set our sights on today's title in the spotlight... 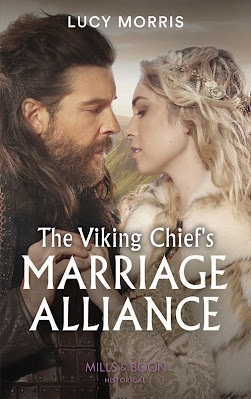 The Viking Chief’s Marriage Alliance
by
Lucy Morris
About the book...
A challenging wife...
For a warrior Viking...
When Thorstein Bergson rescues a beautiful woman from a storm-tossed longship he little expects to broker a powerful marriage alliance with her. This high-status ice queen is not the comfortable wife this warrior chief is seeking, but maybe the bittersweet pain in Gyda’s eyes hides another woman beneath? The one he tasted that first night, when she kissed him with such pent-up longing…
---> GRAB YOUR COPY TODAY <---
~~~~~~~~~~~~~~~~~~~~~~~~~~~~~~~~~~~
~~~ EXCERPT ~~~ 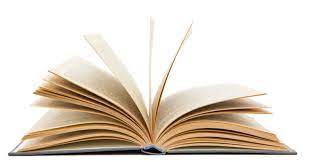 EXTRACT 2 –. This is near the beginning of my story after my heroine, Gyda has been saved by the hero Thorstein from her shipwreck
The boat rocked to one side, and she clutched at the clinker-built planks to stop from sprawling at the stranger’s feet.
He noticed her then, and crouched down in front of her. His eyes washed over her in a detached assessment. It was apparent that he didn’t like what he saw because he snarled out a curse. Then his hand moved like a striking snake and grabbed hold of her foot.
She kicked out with a shout of protest, flustered by the speed and heat of his touch. ‘What are you d-d-d-doing?’ she asked, hating how pathetic the cold made her sound.
‘Checking your feet,’ he said, as he tugged off her shoes and leg wrappings with frightening efficiency.
Her breath came out in a hiss at the sight of her naked feet. They were as pale as bone and there was a frighteningly blue tinge beneath her toenails. The man cursed and pulled the blanket from his own shoulders with a snap of his wrist. He shook it out and wrapped her bare feet and calves in the dry wool, swaddling them until they were wrapped under several layers.
‘You should take off all your wet clothing and wrap yourself in dry blankets to avoid a chill.’
He dragged over a nearby pile of blankets and started to rub her hair vigorously with one of them as if she were a child. She felt light-headed from the rough movement as her braids unravelled in a mess around her shoulders. She’d be untangling the knots for hours.
‘N-n-no,’ she ground out through trembling lips.
‘I have seen men lose limbs after being exposed to the sea.’
He was right, of course, and they both knew it. But she was a lone woman in a strange land, with little protection or wealth. But her clothes and jewellery identified her as a jarl’s wife. They gave her power in a world ruled by men. They were her sword and her shield. And she would wield them with arrogance and pride—because if these men realised how vulnerable she truly was… Well, it didn’t bear thinking about.
‘Take off your cloak at least. Otherwise it will only soak the dry blankets and make you ill.’
The idea of being sick as well as destitute made her earlier resolve falter. She looked into his bright blue eyes and wondered if she could trust him. For all his gruffness and huge physique, he seemed genuinely concerned for her health.
Refusing to break eye contact, or back down in the silent battle of wills between them, he stood up and raised one eyebrow in question.
She would concede the cloak, she decided. She could already feel the wind biting into the damp cloth and it made the horrible shivering worse. She shuffled to her feet in a huff, refusing to acknowledge that he was right or had had any say in her decision. The strength of her conviction was somewhat diminished when she wobbled on her numb feet as exhaustion threatened to engulf her.
His large hand snapped out to steady her and out of habit she flinched. His hand hesitated, and then settled gently on her shoulder, steadying her with its warm strength.
She avoided his shocked expression with grim determination and began to fiddle with the bronze brooch on her cloak.
‘Let me help…your fingers must be numb,’ he said in a soothing tone, as if she were a spooked horse.
He reached for her brooch. The design was intricate and shaped into Odin’s ravens of thought and knowledge, both of which had currently flown from her mind as his fingers brushed a welcome flame beneath her jaw.
Her shoulders relaxed as she took a shuffling step towards him, gripping the blanket around her head and shoulders, afraid of the inevitable blast of cold once the cloak was gone. He quickly undid the brooch and her blue cloak pooled at her bundled feet.
She was grateful when he quickly gathered the blankets that were draped over her closer, shielding her from the wind and the eyes of the other men.
‘No one will see if you strip down to your shift,’ he said, deliberately raising his chin and looking up with great interest at the seagulls weaving through the clouds.
Now that she was free of her wet cloak, the chill of the sea air was making her tremble viciously. She decided to trust the honour of this warrior, for now, and tried to unbuckle the matching brooches that held up her thick woollen gown. But her fingers were raw from the earlier rope burn, and as the wind bit into them she struggled even to grip a brooch without her hands screaming in pain.
She gave up with a sigh of frustration. ‘I can’t undo the brooches…my fingers…’
‘Hold the blanket and I will help you.’
She took hold of the blanket’s corners, her fingers brushing against his delicious warmth once again. He avoided her eyes as he bent his head to focus on the clasps. They were tiny in his hands, and he had to bend down significantly to look at them. His hot breath fanned against her neck and she had to bite her lip to stop herself from sighing.
She glanced down and embarrassment clawed up her spine. She imagined she looked terrible, and his unpleasant scowl only confirmed it. He removed each brooch with grim determination, as if he were removing a leech. It was another blow to her already tattered pride.
Gyda squared her shoulders and straightened her spine. She did not care what this man or, in fact, any man thought of her.
No man would ever break her again.
~~~~~~~~~~~~~~~~~~~~~~~~~~~~~~~~~~~
About the author... 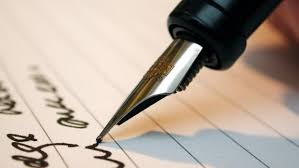 Lucy Morris lives in Essex, UK, with her husband, two young children and two cats. She has a massively sweet tooth and loves gin, bubbly and Irn-Bru. A member of the UK Romantic Novelists' Association, she was delighted to accept a two-book deal with Harlequin after submitting her story to the Warriors Wanted submission blitz for Viking, Medieval and Highlander romances.
Writing for Harlequin Historical is a dream come true for her and she hopes you enjoy her books!
FACEBOOK | TWITTER | INSTAGRAM
~~~~~~~~~~~~~~~~~~~~~~~~~~~~~~~~~~~