HI there!
Welcome back to Satisfaction for Insatiable Readers.
What's that? You've READ that greeting today? GREAT! That means you're a frequent visitor and for that, I thank you very much! If not, welcome aboard and get ready because today's title on tour with Walden Pond Press is a STUNNER. Ladies and gents, get ready to look at the wages of war in a whole new way as we explore today's blog tour guest and book of choice... 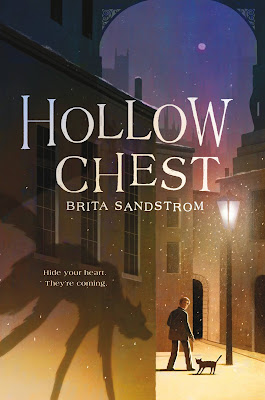 Hollow Chest
by
Brita Sandstrom
9780062870742
Walden Pond Press
About the book...
Debut author Brita Sandstrom arrives with a sweeping, unforgettable historical ghost story of the darkness around and inside us, and the courage it takes to keep hope alive.
Charlie has been having nightmares. Eyes watching him in the night, claws on his chest, holding him down. His dreams have been haunted for years, ever since German bombs rained down on London, taking his father’s life, taking his city’s spirit, taking his beloved brother, Theo, off to war in France.
Now Charlie is left to take care of his grandpa Fitz while his mother works, waiting for the day when Theo will come home. And with World War II nearly won, that day is almost here. Grandpa Fitz warns Charlie that soldiers sometimes come back missing a piece of themselves, but Charlie isn’t worried. Whatever Theo has lost, Charlie will help him find it.
When Theo finally does return, though, he is cold and distant. But Charlie refuses to accept that the brother he knew is gone, and soon, he discovers the reason for his brother’s change: war wolves. These are terrifying ancient beasts who consume the hearts of those broken by grief.
The wolves have followed soldiers back home from the front. And if Charlie truly wants to save Theo, he’s going to have to find them and get his brother’s heart back. But can a heart that’s been eaten ever be replaced?
~~~~~~~~~~~~~~~~~~~~~~~~~~~~~ 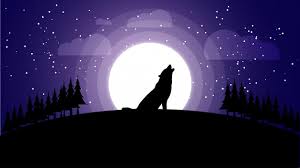 War is a dangerous thing...
...but it's more than the battlefield that can take a life...
...or change it beyond recognition.
Charlie Merriweather is a young boy.  He has hopes, dreams, and desires, but lately, they've been pushed to the wayside as he fills the role of "man of the house" while he brother is away.  It was a promise they made before he left for war...he'd let them take care of him, and in turn he'd really be taking care of them.  Sneaky, but loving...and so he did.  He helped his Grandpa.  He did all he could for his Mother.  He took care of his cat, Biscuits, and held down the fort.  When news comes that he won't have to go it "alone" anymore, he's beyond thrilled...not merely for the relinquishment of duties, but the fact that it means his brother is coming home.  He's counted the weeks, days, and hours, and the moment has finally arrived...but war has a way of changing things, AND people, for better or worse, and generally it's for the latter.  Charlie has been warned, kindly and otherwise, but the reality of it all hits him like a ton of bricks.  It's not long that his brother is back and he's made a decision.  His brother returned incomplete, and he's bound and determined to make him whole once again.
This was a rather interesting look at the true wages of war, and how long after the last bullets are fired, battles carry on.  The way the hungers and dangers were portrayed, the wolves themselves, and the rats before and aft them, were both serene and bone chilling.  I appreciated the way the author portrayed the feelings Charlie was experiencing, and the realizations he had along his noble journey, as it made those moments readers may recognize in their own lives THAT much more relatable.  that much easier to say yes, it's not the way I want to feel, but it is okay to feel that way and with time, if it doesn't pass, it gets better.  So settle in and experience Historical Fiction in a whole new way with this memorable debut perfect for middle grade readers and beyond.
~~~~~~~~~~~~~~~~~~~~~~~~~~~~~
About the author...

Brita Sandstrom is a graduate of Hamline University’s MFA program in writing for children and young adults. Hollow Chest is her first book. She lives with her family and a collection of cats in Minneapolis, Minnesota. You can visit her online at www.britasandstrom.com
~~~~~~~~~~~~~~~~~~~~~~~~~~~~~~

Special thanks to Debbie and the Walden Pond Press team for the chance to bring this tour to you as well as the ARC for review. (THANKS!) For more information on this title, the author, or the publisher, feel free to click through the links provided above. This title is available now, so click on over to snag your copy today, and be sure to check out the rest of the tour for more bookish fun! 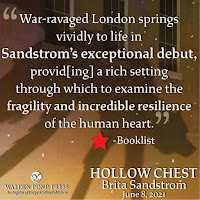 Until next time, remember...if it looks good, READ IT!
Posted by Gina at 2:54 AM