Happy Fry Day...or is that Friday?

Why hello there readers!

Happy Fry Day to each and everyone of ewe.
Today we embark on a fantasy adventure sure to capture your imagination, ﻿feed your need for fantasy, and release a plethora of word fun for your bookish soul.  So now let's....wait, what's that? ~listens intently~ Oh.  you're wondering about the "ewe" at the top and "fry day" reference.  Observant bunch, aren't you.  Not to worry, I haven't forgotten how to type or proper word meaning (aka it's not a typo)....it's merely a ploy to pull you into all the fun.  Trust me....yule sea.

Today's book of choice comes to us from the great folks over at Bell Bridge Books and saw its publication debut a little earlier this year, which makes it ready and waiting for eager readers desiring a copy all their own.  Without further adieu, today's featured title is.... 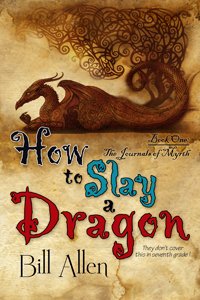 The Journals of Myrth, Book One:
How to Slay a Dragon
by
Bill Allen

Ruuan is a very large dragon.

Twelve-year-old Greg Hart can't slay a dragon. He'd be lucky to win a fight against one of the smaller girls at school.


Now the magicians of Myrth have mistaken him for a legendary warrior, so they've yanked Greg into their world of sorcery and danger. Nothing will stop the people of Myrth from believing Greg will rescue King Peter's daughter from Ruuan the dragon. After all, Greg has been named in a prophecy, and no prophecy has ever been wrong before.

Have you ever heard it's all in what you say...or rather how it's perceived?  Mistaken meanings happen EVERY DAY.  Online, in person, in text , on the phone, you name it and someone has mistaken the meaning of what someone has said for something completely different...for better or worse.  Such is the case here for our young "hero" (champion or sandwich?), Greg Hart of Earth who apparently is the long sought champion-to-be of Myrth in lieu of another by a similar name that happens to fight dragons every other day. (Are you with me so far?  Good.)  Hmm...interesting coincidence?  I don't know....the circumstances under which the prophecy was obtained are rather sketchy to say the least but then again stranger (odd or person?) things have happened.

Massively fun word play is the name of the game and it runs amuck throughout the story.  Hear and their...or rather HERE and THERE you can find it on almost everyone page; a cornucopia of English class fun if I do say so myself.  I can certainly see this working in a classroom setting as a great learning assignment to illustrate proper word usage.  But anywho, aside from the nerdy wordy fun, there is the adventure itself.

Greg Hart (or is that Greghart as all the people of Myrth believe his name to be?) is a likable character, as is Lucky, Priscilla, and a slue of other friendly types met along the way.  Even the not-quite-as-friendly (or helpful) ones are great...like the Witch Hazel (ha, get it?!) and Simon Sezxqrthm (Simon Sez for short....ha!)....each adding a little something special to the story in their own way of course.  Every one he encounters on his journey brings a little mischief to the overall prophecy as it unfolds before their eyes and you can guarantee that while being engrossed in thoughts of just what might happen next (and laughing at all the "inside" jokes you uncover), you'll be taken by surprise as the unseen path is followed.  It's not a book that leaves its potential outcomes wide open for you to gawk and stare at, no sir.  You have selectively pick it out of the proverbial haystack, or merely let it run its course and hold on tight....me, I prefer the second method here.

In short (length not height), a wordy adventure into the realm of fantasy steeped with enough action to draw you in and enough word play to keep you thinking (and laughing) along the way.  I for one thoroughly enjoyed this romp through the land of Myrth and can not wait for our next chance to visit them once again.  Speaking of which, book two, The Hero Who Slayed Ruuan....yeah, there's an excerpt at the back of book one and a teaser on the author's website (*WARNING* - Do NOT read the excerpt until you've read book one!  Spoiler alert!).  Sounds good!  -- adds to wish list --  Last but not least, I simply HAVE to share the author's bio (as in biography not biology) information with you for it's a laugh that needs to be shared....

BILL ALLEN may be described as an unusual man who has accomplished an unusual many deeds. In fact, it has been said that if you total up all the things he claims to have done, he cannot possibly be less than seven hundred years old.  No one knows if this is true. All we know for certain is that for many of those years he's been living in Florida with his wife, Nancy, writing software by day and, well, mostly sleeping by night. Every now and again he writes stories, too.

ARC for review courtesy of Belle Bridge Books, an imprint of Belle Books.  (THANKS!) For more information on this title, seek out the publisher's website for the book trailer, as well as the MUST READ book excerpt sure to convince you if my review has not already.  Seriously great fun to be had here guys....seriously.  To see the publisher's full catalog, be sure to check out their site and for all of their current happenings, follow along on Twitter (you know I do).  For more information on author Bill Allen and his full body of written works, visit his site, check out his Facebook page, or follow Greg Hart's Facebook page (<-- that out to be pretty interesting...).

Until next time....have a great weak end, err, I mean WEEKEND....and happy reading!

You know how much I love the play on words so I think I'll really enjoy this one, thanks for such a fun post.

I love the cover! Sounds like a fun mix of fantasy and dragon. I really wish we had such fun fantasy books when we were kids - I had to survive with only HP and LoTR.
The author's bio is hilarious. 700 years! Impressive ;)

This one's been on my list ever since I saw the cover...I'm glad to hear that it's just as fun to read!

Petty Witter: My pleasure. Hope you enjoy it!

Misha: Yeah really! I love all the new chances authors are taking to give kids so many creative worlds to delve into. (Pretty good picture for a 700 yr old! LOL.)

Sounds soooo awesome. I LOVE anything to do with dragons. It's funny because I dealt with a mistaken identity the other day LOL! Great cover too :)

Elisabeth Hirsch: Then I think this one might be right up your alley. Welcome aboard! ^_^