Today, we're shining the spotlight on a Historical Fiction title that came our way via TLC Book Tours.  This is part ONE of a TWO part tour. The first leg is tasked with getting your reading appetite primed with exclusive excerpts of the title at hand, while the second takes you behind the pages with reviews across the blogosphere.  Sounds good, right?  So right!  Let's get to today's title in the spotlight... 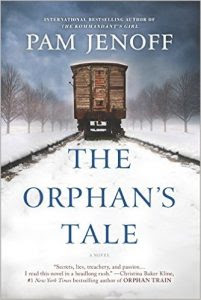 About the book....
A powerful novel of friendship set in a traveling circus during World War II, The Orphan’s Tale introduces two extraordinary women and their harrowing stories of sacrifice and survival

Sixteen-year-old Noa has been cast out in disgrace after becoming pregnant by a Nazi soldier and being forced to give up her baby. She lives above a small rail station, which she cleans in order to earn her keep… When Noa discovers a boxcar containing dozens of Jewish infants bound for a concentration camp, she is reminded of the child that was taken from her. And in a moment that will change the course of her life, she snatches one of the babies and flees into the snowy night.

Noa finds refuge with a German circus, but she must learn the flying trapeze act so she can blend in undetected, spurning the resentment of the lead aerialist, Astrid. At first rivals, Noa and Astrid soon forge a powerful bond. But as the facade that protects them proves increasingly tenuous, Noa and Astrid must decide whether their friendship is enough to save one another—or if the secrets that burn between them will destroy everything.

My father had not fought me on leaving with Erich. I expected him to rebuke me for marrying a non-Jew, but he only smiled sadly when I told him. “I always thought you would have taken over the show for me,” he’d said, his sad chocolate eyes a mirror of my own behind his spectacles. I was surprised. I had three older brothers, four if you counted Isadore, who had been killed at Verdun; there was no reason to think that Papa might have considered me. “Especially with Jules taking his own branch of the show to Nice. And the twins…” Papa had shaken his head ruefully. Mathias and Markus were strong and graceful, performing acrobatic marvels that made the audience gasp. Their skills were purely physical, though. “It was you, liebchen, with the head for business and the flair of showmanship. But I’m not going to keep you like a caged animal.”
I’d never known he saw me that way. Only now I was leaving him. I could have changed my mind and stayed. But Erich and the life I thought I always wanted beckoned. So I left for Berlin, taking Papa’s blessing with me.
Perhaps if I hadn’t, my family might still be here.
The maid ushers me to a sitting room that, though still grand, shows signs of wear. The rugs are a bit frayed and there are some spaces in the silver cabinet that are empty, as though the bigger pieces had been taken or sold. Stale cigar smoke mixes with the scent of lemon polish. I peer out the window, straining to see my family’s estate through the fog that has settled above the valley. I wonder who lives in our villa now and what they see when they look down at the barren deserted winter quarters.
After our wedding, a small ceremony with a justice of the peace, I moved into Erich’s spacious apartment overlooking the Tiergarten. I spent my days strolling the shops along Bergmannstrasse, buying richly colored paintings and rugs and embroidered satin pillows, little things that would make his once-sparse quarters our home. Our biggest dilemma was which café to frequent for Sunday brunch.
I’d been in Berlin for almost five years when the war broke out. Erich received a promotion to something I didn’t understand having to do with munitions and his days became longer. He would come home either dark and moody, or heady with excitement about things he could not share with me. “It will all be so different when the Reich is victorious, trust me.” But I didn’t want different. I liked our life just as it had been. What was so wrong with the old ways?
Things had not gone back to the way they had been, though. Instead they worsened rapidly. They said awful things about Jews on the radio and in the newspapers. Jewish shop windows were broken and doors painted. “My family…” I’d fretted to Erich over brunch in our Berlin apartment after I’d seen the windows of a Jewish butcher shop on Oranienburger Strasse shattered. I was the wife of a German officer. I was safe. But what about my family back home?
“Nothing will hurt them, Inna,” he soothed, rubbing my shoulders.
“If it’s happening here,” I pressed, “then Darmstadt can be no better.”
He wrapped his arms around me. “Shh. There have just been a few acts of vandalism in the city, a showing. Look around you. Everything is fine.” The apartment was scented with the smell of rich coffee. A pitcher of fresh orange juice sat on the table. Surely it could not be so much worse elsewhere. I rested my head on the broad shelf of Erich’s shoulder, inhaling the familiar warmth of his neck. “The Klemt family circus is internationally known,” he reassured. He was right. Our family circus had been generations in the making, born from the old horse shows in Prussia—my great-great-grandfather, they said, had left the Lipizzaner Stallions in Vienna to start our first circus. And the next generation had followed and the one after that, the very oddest sort of family business.
Erich continued, “That’s why I stopped to see the show on my way back from Munich that day. And then I saw you…” He pulled me onto his lap.
I raised my hand, cutting him off. Normally I loved his retelling of how we met, but I was too worried to listen. “I should go check on them.”
“How will you find them on tour?” he asked, a note of impatience creeping into his voice. It was true; midsummer, they could be almost anywhere in Germany or France. “And what would you do to help them? No, they would want you to stay here. Safe. With me.” He nuzzled me playfully.
He was right of course, I had told myself, lulled by his lips upon my neck. But still the worry nagged. Then one day the letter came. “Dearest Ingrid, we have disbanded the circus…” Papa’s tone was matter-of-fact, no plea for help, though I could only imagine his anguish at taking apart the family business that had flourished for more than a century. It did not say what they would do next or if they would leave, and I wondered if that was by design.
I wrote immediately, begging him to tell me what their plans were, if they needed money. I would have brought the whole family to Berlin and fit them into our apartment. But that would only have meant drawing them closer to the danger. In any event, the point was moot: my letter came back unopened. That had been six months earlier and there had been no word. Where had they gone?

Pam Jenoff is the author of several novels, including the international bestseller The Kommandant’s Girl, which also earned her a Quill Award nomination. Pam lives with her husband and three children near Philadelphia where, in addition to writing, she teaches law school.

Special thanks to Lisa at TLC Book Tours for the chance to participate in this promotion.  (THANKS!)  For more information on this title, the author, the publisher, or those tours on the horizon, feel free to click through the links provided above.  Be sure to check out the rest of the "part one" tour to REALLY get your read on!  This title is set to release February 21, 2017 via MIRA, so mark your calendar or preorder your copy today!

This novel is captivating, and interests me for the era, story and this author's novels are always so well portrayed, written and meaningful. Thanks.