Hey guys and gals!
Welcome back to Satisfaction for Insatiable Readers.

I've got a SPECIAL treat for you today...not that the other days aren't special, but this one has a little something more.  Curious?  Good.  That's just how I want you to be.  Part one of said treat is in the announcement of the tour we're featuring today.  It comes to us via Walden Pond Press (love those guys!) and stars the first book in The Chronicle of the Dark Star series, releasing this Tuesday, February 14th, 2017!  That's right.  It's a PRE-PUB PAR-TAY up in here...sorry, couldn't resist...and we're ready to shine the spotlight on the featured title.  Ready or not, here comes today's book of choice... 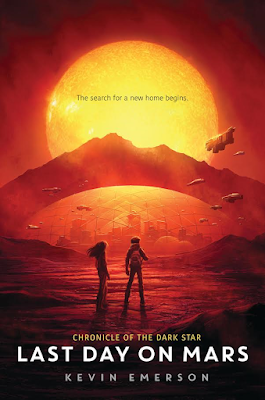 About the book...
It is Earth Year 2213—but, of course, there is no Earth anymore. Not since it was burned to a cinder by the sun, which has mysteriously begun the process of going supernova far sooner than anyone expected.

The human race has fled to Mars, but this was only a temporary solution while preparing for a second trip: a 150-year journey to Aaru-5, a distant star, humanity’s best guess at a good spot for a new home.

Liam Saunders-Chang is one of the last humans left on Mars. The son of two scientists who have been racing against time to create technology to ensure humanity’s survival, Liam, along with his friend Phoebe, will be on the last starliner to depart before Mars, like Earth before it, is destroyed.

Or so he thinks. Because before the last day on Mars is over, Liam and Phoebe will make a series of profound discoveries about the nature of time and space and find out that the human race is just one of many in the universe locked in a dangerous struggle for survival. Kevin Emerson has written the first book in an ambitious space epic—a powerful, emotional, pulse-pounding story of the final days of humanity’s first home beyond Earth, and the desperate search for another.

“Enigmatic enemies, sabotage, space travel, and short, bone-wracking bits of time travel make for a banging adventure.” Kirkus Reviews (Starred)
“Last Day on Mars is thrillingly ambitious and imaginative. Like a lovechild of Gravity and The Martian, it's a rousing space opera for any age, meticulously researched and relentlessly paced, that balances action, science, humor, and most importantly, two compelling main characters in Liam and Phoebe. A fantastic start to an epic new series.” —Soman Chainani, New York Times bestselling author of the School for Good and Evil series
“Emerson's writing explodes off the page in this irresistible space adventure, filled with startling plot twists, diabolical aliens, and (my favorite!) courageous young heroes faced with an impossible task.” —Lisa McMann, New York Times bestselling author of the Unwanteds series

Still not convinced?
Not a problem.
You know me, I come prepared.
So...now we come to PART TWO of the aforementioned "special treat"...

What?  Oh, I see, you think it's just another excerpt.  Well sir and madam, you'd be wrong.  You see, THIS excerpt happens to be THE ORIGINAL PROLOGUE written (and copyright owned) by the man himself (author Kevin Emerson) and shared with permission from the fab team at Walden Pond Press (THANKS GUYS!  You rock!).  You're welcome. 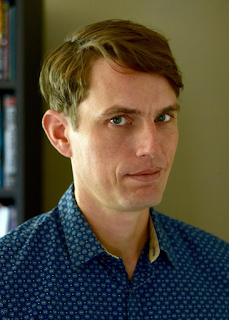 Kevin Emerson is the author of The Fellowship for Alien Detection as well as the Exile series, the Atlanteans series, the Oliver Nocturne series, and Carlos is Gonna Get It. He is also an acclaimed musician who has recorded songs for both children and adults. A former K-8 science teacher, Kevin lives with his family in Seattle.

Special thanks to the fab team at Walden Pond Press for the chance to participate in this tour as well as the copy for review (coming at a future date!).  (THANKS!)  For more information on this title, the author, or the publisher, feel free to click through the links provided above.  This title is set to release FEBRUARY 14th, 2017, so preorder your copy now, or mark your calendar!  In the mean time, don't miss the other WONDERFUL stops on this tour featuring reviews, guest posts, and the like...