In This Life by Christine Brae

Today, we're shining the spotlight on a title that quite literally just left my "current reads" list.  Yep, just finished about 4 hours ago, give or take.  Close call?  No...just simply me trying to show life who's the boss....(you hear that life?  I have your number!)  Anywho....the title on deck came to my attention via Meryl Moss Media, and stars a late 2016 release via Vesuvian Books.  It's a work of Fiction that seems to have a touch of magic, or other-worldliness to it that you can only really capture by immersing yourself in the story.  Ready to discover what this title has in store?  Today's book of choice is... 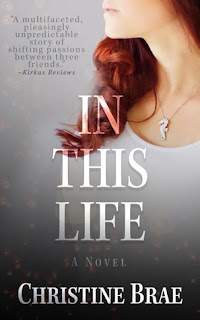 About the book...
Secrets ruin lives, and lies protect those secrets…Wanting to escape her life in New York City before starting medical school in the fall, Anna Dillon convinces her best friend Dante to travel with her to Thailand on a medical mission. While volunteering in a coastal village recently ravaged by a tsunami, Anna meets Jude Grayson. They share an instant attraction that leads to a brief, passionate affair. When she has to rush home for a family emergency, he promises to stay in touch.But Jude never calls, and Anna tries desperately to forget him.Five years pass, and Anna finally moves on with Dante after giving up hope that Jude will ever return—until they come face to face again in a chance encounter. Reeling, Anna discovers the life-altering secret of why Jude never contacted her—and why they can’t be together. But the passion that ignited between them on an exotic beach years ago never died, making it impossible to stay away from each other.And Dante? Anna discovers that the friend she grew to love—and trust—has a secret of his own.

I really didn't know what to make of this one as I was reading.  I mean, we have three characters whose lives are inexplicably entwined and yet they keep falling just short of reaching an earthly paradise time and time again.  Just when you think the winds have changed in their favor, nope...bottom drops out...but as the author says through her leading lady's closing passages,...

"This isn't a story about death, dying, sadness, or the indescribable emptiness that comes with losing someone you love.  This is a story about the infinite bounds of true love and commitment and the redeeming gift of hope."  - pg 312

It's a story best looked at through the eyes of those the lived it, so I give you, my take on the characters and their roles in the story.

Anna...our fiery red head (or Blue) whose passion for life and love light a thousand hearts ablaze...okay, two...two hearts, but they burn no less bright than the thousand.  Her desire to help others and make a difference is what led her to her career or choice as well as the trip that will change her life in SO many ways.  It won't just make her humble and more conscience of the things she's been afforded in life, but break her down into her smallest parts and make her sort the order back out again over a lifetime.  Can it be done?  Oh, yes...but there is much love, life, and heartache to be felt along the way.

Dante...he was always his true self, a ladies man that fell for his best lady friend, and yet, even he had secrets.  The ones he kept, like most people's, were supposedly to keep additional hurt at bay and let time heal the wounds.  Word to the wise, never decide what another should hear...let the cards fall and be there for them, whatever may come...a lesson he may have learned too late.  In this story though, too late is a very relative term, and despite the fact that a "player" would be my last choice for Anna, he really did have a heart of gold.

Jude...though who exactly he is remains a mystery for the better part of the first half of the novel, you get hints and feelings about his true "identity" from the start.  If you've been exposed to any sort of secular study or beliefs, you'll catch them (though they are much more apparent the further we go), but even so, I wasn't sure truly what to make of them, or rather, him.  Man or myth?  Chance encounter or fate's intervention?  Lifelong love or soulmate?  So many QUESTIONS!  He really was a conundrum...and despite the battle he faces within himself, despite his negative attributes, you can't help but see he is a second half to Anna's whole...

So, as you can see, it's an unusual tale that needs to be approached with an open mind AND heart.  Be ready to both love and loathe the characters, their choices, and some of the topics covered...some of which may be slightly controversial to some audience members...but also be ready to accept the messages the author is conveying through their struggles, AND triumphs.  What you do with the lessons after that is entirely in your hands...

Christine Brae was born and raised in the city of Makati, Philippines before she met and married her best friend who whisked her away to Chicago over twenty years ago. Since then, Christine has established herself as a full time career woman, holding a senior executive position in one of the largest global advertising agencies in the world. She is the author of four novels, has an established fan base and a dedicated following. Her titles have consistently ranked in the Top 100 months following their release.

Special thanks to Erika at Meryl Moss Media for the copy for review.  (THANKS!)  For more information on this title, the author, the publisher, or those promotions on the horizon, feel free to click through the links provided above.  This title is available now via Vesuvian Books, so be on the lookout for it on a bookstore shelf or virtual retailer of your choosing.