Today, we're spreading the BOOK BUZZ about a title COMING SOON to a bookstore/virtual shelf near you via William Morrow.  It's a work of Fiction with a historical flavor that is curious, unusual, and MUCH more than it at first seems...which can be both good and not-so-much...but I digress.  Introductions first, then the nitty gritty.  Ladies and gents, hold on to your hats, your books, and your memories because today's book of choice is taking center stage... 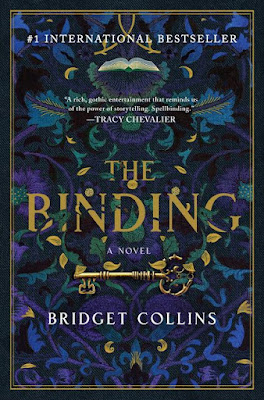 Young Emmett Farmer is working in the fields when a strange letter arrives summoning him away from his family. He is to begin an apprenticeship as a Bookbinder—a vocation that arouses fear, superstition, and prejudice among their small community but one neither he nor his parents can afford to refuse.

For as long as he can recall, Emmett has been drawn to books, even though they are strictly forbidden. Bookbinding is a sacred calling, Seredith informs her new apprentice, and he is a binder born. Under the old woman’s watchful eye, Emmett learns to hand-craft the elegant leather-bound volumes. Within each one they will capture something unique and extraordinary: a memory. If there’s something you want to forget, a binder can help. If there’s something you need to erase, they can assist. Within the pages of the books they create, secrets are concealed and the past is locked away. In a vault under his mentor’s workshop, rows upon rows of books are meticulously stored.

But while Seredith is an artisan, there are others of their kind, avaricious and amoral tradesman who use their talents for dark ends—and just as Emmett begins to settle into his new circumstances, he makes an astonishing discovery: one of the books has his name on it. Soon, everything he thought he understood about his life will be dramatically rewritten.

First things first, that GORGEOUS cover!
I mean, isn't it just eye appealing in design, color palette, and font?  Okay, well to ME it was, so when I first read about this one online, my interest was peaked.  Now, as for the reading...

I definitely took my time with this one, the perk of not overscheduling my reading obligations at the moment, and I'm really glad I did because it was...unusual. I can't say it was love at first page turn, but I was certainly intrigued. So many questions arose after each passage was read! What happened during Emmett's missing hours (because you just KNOW something did)? Why was he even around the area in which he was found, or rather finds familiar?  How did the kid that shows up at his new "employer's home" know him (because it was OBVIOUS he did)? Is Seredith going to be okay after the strange trance of sorts that she falls into and what of her failing health afterwards? What of her apprentice's fate if not (because if that poor excuse for a binder MAN gets him, he's doomed)? What "power" was that Emmett exhibited when the flaming torches were mere inches from his new home?  I mean, I could JUST.  KEEP.  GOING.

Now don't get me wrong, I had a feeling about some things as things progressed, but wow...the moment you think you just about have them figured out, they just turned all sorts of topsy turvy. The whole BINDING concept went from an act of kindness to a twisted self indulgence in a heartbeat.  I mean how could something be so bad that you want it locked away for all time?  What of the lessons learned from it?  What of the new beginnings opened by it?  Although perhaps some things are just too much for a heart to bare.  Honestly, the young girl who came in in such distress to Seredith's home and her story...I mean, you want to point fingers at the girl for her part in what transpired, but when you discover the root of it all, you can't help but resist that urge and point elsewhere...and wish for a way to strike down the one who started it all.  Then again, what of the perceived freedom it gives to those that create instances worthy of binding in the first place?  SEE?!  SO MANY QUESTIONS!

As for the writing, the author was able to draw you into the past and back to the present with such fluidity, were it not for the change in tone or character voicing the chapters, you'd never realize the journey you've actually taken. The characters she created were STRIKING and MEMORABLE, even when they were suppose to fade into nothingness.  The power of the written word is definitely on full display here, as are the consequences that go along with hiding away our true selves, or even giving our truths over to someone else fully without baring the weight of any of the lessons learned from them.


All in all, I gotta say this was definitely an INTENSE, UNUSUAL, UNEXPECTED, and CURIOUS read.  It's a story that certainly makes you think twice about what you put down on paper, and reconsider the memories we choose to hold on to versus release and vice versa...as well as the WHY.  My only real complaint with the book was that ONE SCENE...it involved the killing of a dog and in my opinion was too much, too far, and not necessary...or at the very least the details included could have been more general where it let us know it happened, but lacked the black and white confirmation...and I mean it was enough to make we second guess if I would have read the book knowing it was in it. What can I say, I'm an animal lover and it just didn't sit right with me. (That scene was more of a reason for having a binding done than any other!) Otherwise, I was good...thoroughly surprised since it wasn't anything like what I thought it would be, but still good. So, do I recommend it? Yes...just go in being warned about that one scene, so you can either bulldoze through it, or skip the page.

Bridget Collins trained as an actor at the London Academy of Music and Dramatic Art after reading English at King’s College, Cambridge. She is the author of seven acclaimed books for young adults and has had two plays produced, one at the Edinburgh Festival Fringe. The Binding is her first adult novel. She lives in Kent, United Kingdom.

Special thanks to the William Morrow team for the ARC for review.  (THANKS!)  For more information on this title, the author, or the publisher, feel free to click through the links provided above.  This title is set to celebrate its BOOK BIRTHDAY April 16th, 2019, so mark your calendar or pre-order your copy today!